Hey everyone, I’m featured once again over on MovieRob for September’s Genre Grandeur (favorite ’70s movies). Come check out my thoughts on Willy Wonka and the Chocolate Factory!

For this month’s first review for Genre Grandeur – Movies of the 70’s, here’s a review of Willy Wonka and the Chocolate Factory (1971) by Tom of Digital Shortbread.

Thanks again to Sherise of The Girl That Loved to Review. for choosing this month’s genre.

Next month’s Genre has been chosen by me.

In honor of the month when Marty McFly came to visit us here in 2015, I have decided that we will be reviewing our favorite movies featuring time travel.

Please get me your submissions by the 25th of October by sending them to timetravel@movierob.net  Try to think out of the box! Let’s see what Tom thought of this movie: 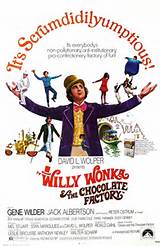 Number of times seen: dozens, though the most recent watch was probably about 10 years ago now

Brief Synopsis: A poor boy wins the opportunity to tour the most eccentric and wonderful candy factory…

Holy Gene Wilder, it’s an actual, legitimate “throwback” post for once! 😀 (Yes, this is not that new Johnny Depp remake, the one that looks more like a horror movie.) This one currently stands as the oldest film I’ve reviewed so far but it might also strike a second landmark as being one of my all-time favorite films and one I hold in highest regards. This loyal adaptation of Roald Dahl’s beloved children’s novel (Charlie & the Chocolate Factory), in my quiet opinion, epitomizes classic cinema. You cannot have a list of the greats and not have this title on it, it’s that simple. This fascinatingly bizarre tale of kids touring an eccentric candyman’s factory likely has gathered dust at home because, well let’s face it, there’s just a ton of other really great films from the era, enough for this title as well as many others to be easily obscured. But here I am going to jot down a list of reasons what makes this one of the best children’s book adaptations of all time, hopefully shaking some of that dust off those video cassettes in the process for those reading at home.

Today’s food for thought: Willy Wonka and the Chocolate Factory

So this is going to be a fairly difficult task: condensing my favorite elements of this wholly satisfying movie into a Top Ten list. Yikes! That’s like going into Wonka’s factory and picking out your favorite candy. I figured we all know the way this story plays out by now so it would be a little redundant to simply summarize my thoughts on the film that way. (Well, the truth is. . .lists are just easier.) So without further ado, here’s the reasons why this should be the only Chocolate Factory movie ever made (this is in no particular order):

Recommendation: Featuring a childlike wonder unparalleled in many films of its day and in movies that have tried to duplicate the magic, Willy Wonka and the Chocolate Factory is an incredibly charming, unique production that somehow manages to find ways of transcending its strong source material. Not only that, but every time one watches this film, they are instantly transported back to a time of innocence that no longer seems to exist. A wonderful, wonderful movie.

Quoted: “Time is a precious thing. Never waste it.”

Kirkham A Movie A Day

The Second Home of the Kirkham A Movie A Day Blog

the hovering smell of painful writing

This hobby blog is dedicated to movie nerdom, nostalgia, and the occasional escape. In the late 90s, I worked at Blockbuster Video, where they let me take home two free movies a day. I caught up on the classics and reviewed theatrical releases for Denver 'burbs newspapers and magazines. Currently, I am enjoying my new life as a new dad, but when there's free time, movies are standard. Comments and dialogue are always encouraged. Happy Moviegoing!