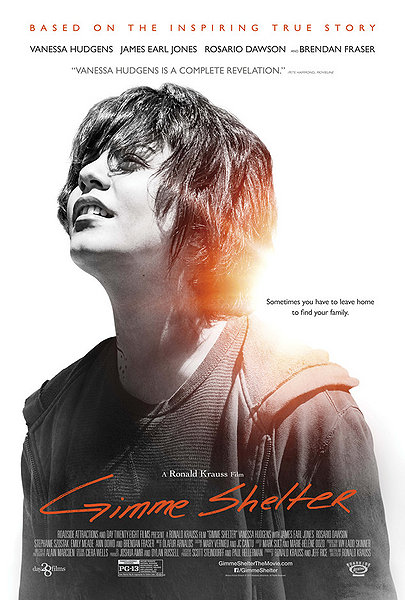 Gimme Shelter finds Vanessa Hudgens and Rosario Dawson playing down their beauty profoundly as Hudgens goes from literal rags to riches in this powerful and emotional drama about life on the streets.

The High School Musical starlet ditches the cute smiles and glitzy performances at the behest of writer/director Ron Kraus and the considerably somber true story upon which this film is based. Twenty-five-year-old Hudgens takes on the challenge of overhauling her unreasonably good looks with her lead performance as Agnes “Apple” Bailey, daughter to abusive mother June (a virtually unrecognizable Dawson) and absentee father Tom (Brendan Fraser).

The film opens with a visibly troubled young girl giving herself a radical haircut, and barely escaping an apartment building with her life after being violently attacked. She manages to flee in a cab but has very little money so the driver throws her out onto the highway. From there, her journey only becomes more desperate and lonely as she attempts to find some way to escape the hostile streets of northern New Jersey. Her goal is to track down her father and seek refuge for a little while until she can, as she puts it, “get back on her feet.”

Her father, a big-time Wall Street executive, doesn’t know what to do when Apple (don’t you dare call her Agnes) shows up in his life suddenly. She’s hostile, perpetually morose, and somewhat confrontational, which might be expected given the fact that she’s bounced from orphanage to orphanage for virtually all of her sixteen-year existence. She is the definition of a walking tragedy. Even if Hudgens at times overplays the part, she’s never less than convincing and despite her prickly outer shell, we feel compelled to sympathize for her. . .although that’s not really what she seeks from anyone.

Feeling unwanted at Tom’s house after she reveals that she’s also pregnant, she again takes to the streets in an effort to. . . who knows. There’s little hope for sanctuary at this point in the story, and the complaints lodged against Gimme Shelter‘s stifling melodramatics start to seem justified.

This is the painful journey of a young girl hurting on a level few are going to be able to comprehend. Hudgens’ portrayal of Apple is like holding up a mirror to reality. What she represents is a truth for thousands, perhaps millions of youths who wander around in our midst, continually struggling to rise above their current circumstances. Hudgens’ performance (not to mention, a disturbing turn from Dawson) is compelling and cannot be ignored. However, despite the genuine passion of all involved, where things become a little unstable is in Kraus’ handling of the third act.

Given the substantial amount of time we spend watching her suffer, it stands to reason we are going to experience some sort of upswing. Something must surely go her way. Kraus certainly thinks that in order to offset the hopelessness experienced throughout the majority of this film, we’re going to need a soap opera-like finale. He is seeking balance, but it hardly comes across as such. What should feel like awakening from a nightmare, turns into something of a dream; an equally dramatic twenty minutes of Hollywood idealism on how this situation should always be resolved. The saddest thing is that so often it does not go this way.

In short, one of Apple’s largest personal issues is her inability or disinterest in cooperating with others; that all changes in the space of a movie minute. Granted, a few developments in this scene occur that drastically would change her outlook on life, but the time she spends with her latest caretaker (Ann Dowd) seems rather contrived and unrealistic. Considering her disdain towards all foster homes, her newfound joy in this place is random and doesn’t feel earnest.

None of this is to say that Apple (and the girl upon whom she is based) doesn’t deserve happiness but given the backstory, these kinds of struggles aren’t the kind one easily “puts behind them,” as Tom suggests in an earlier scene. Apply this to our moviegoing experience: we can’t exactly put all of what happens to the embattled girl behind us as easily as Kraus would like us to.

On the whole, and omitting some of the major design flaws in the story, Gimme Shelter packs a heck of a punch. It features some terrific performances that are going to be overlooked, simply based on the release date of this film. January is a month not known for quality releases, and while this film isn’t award-worthy by any means, it’s certainly not deserving of the critical backlash it has already earned. It’s hard to believe that this is Hudgens here, and ditto that to Dawson’s June Bailey. Her inexcusable behavior exemplifies Dawson’s dramatic abilities. Brendan Fraser factors in nicely as well, as does the iconic, booming voice of James Earl Jones.

He may have admitted to being Luke’s father, but he sure should be Apple’s as well; he’d make for a far better one than Tom. 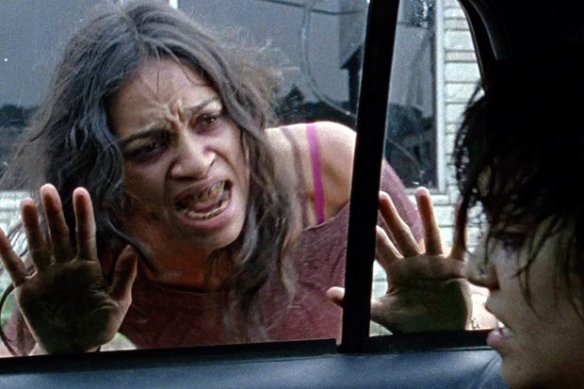 Recommendation: It’s not a movie of subtlety. Gimme Shelter uses a girl’s troubled youth as a platform to spread anti-abortion sentiment (a fact that I personally have no issues with, but you need to know it is there), and a need to start finding ways to serve the nation’s (and the world’s) underprivileged youth better. Moving beyond the B.S. of politics, there are wonderful performances contained herein that you should not allow yourselves to miss. It’s not a perfect film, but it’s a pretty moving one.