I miss big Jim. While I wasn’t the most dedicated viewer of The Sopranos (I have yet to see a single episode), it just seemed appropriate that I go catch his last big-screen performance in Nicole Holofcener’s Enough Said, which pairs him with Seinfeld star Julia Louis-Dreyfus in a romantic comedy that is both timely and by the same token, almost unbearably bittersweet.

That Gandolfini’s last role would be a tender one like this only makes his departure feel all the more surreal. He plays quite the lovable slob in this down-to-earth, feel-something comedy; an outing that’s written as if real life were unfolding on screen — much credit needs to be awarded Holofcener in that regard. She’s a dual threat as she penned this poignant and deeply personal screenplay, as well as direct it; both appear to be capacities in which she finds great comfort and confidence.

At the heart of Enough Said is a relationship that develops in quite an unusual way. Imagine if by some random chance you were able to get some perspective on a person you’re currently dating, from an ex of theirs. This isn’t the usual gossipy kind of get-to-know-you kind of methods of socializing we’re dealing with, either. Your trump card is that this person you’re talking to on the side has no idea you’re currently their ex’s new flame. Your identity will remain this way unless you accidentally are outed (spoiler alert) or say something to reveal you know too much. What would you do? If you had the chance to find out directly from a second source that your special someone likes to pick their nose and eat it when you’re not around, would you really want to know? Or would you rather wait and find these kinds of things out as you continue to invest more time in this person?

Indeed, this is the conundrum Eva (Julia Louis-Dreyfus) finds herself in while getting to know the sweet, kind but ultimately unmotivated Albert.

Working as a masseuse, Eva gets a new client after meeting them at a party one night. She and a poet named Marianne (Catherine Keener) become close, and when the conversations turn to relationships and so forth, the film becomes delightfully complex. Eva learns she’s divorced and that her ex is a slob, a person she could not be intimate with, and whose habits drove her crazy. The things she’s learning seem familiar to Eva but she can’t place a finger on it. One day, as Eva drops by to provide another massage she catches Marianne on the phone with someone, a man named Albert. . . her ex-husband. The same man Eva’s been seeing for a few weeks.

Enough Said is brilliantly crafted, and perspective is everything. It probably will be argued what the MOST critical moment is in this film — is it the one in which Eva learns about the true identity of one her clients, or is it when everything becomes revealed to everyone involved? Is Elaine. . . I mean, Eva,  damnable for her actions? What will come of her decision to keep both relationships a secret? Simply put, there’s enough moral ambiguity in her plight for me to write a book bigger than any of the Lord of The Rings entries, specifically dedicated to all the ways in which her character is inconsiderate and weird, and just generally socially awkward. In fact, I’m nearly convinced if [it] weren’t anchored by an equally towering performance from the late Gandolfini, this movie might’ve been terrible. However, his Albert counterbalances perfectly. The couple have a lovely on-screen relationship that makes the movie far more watchable than it might otherwise have been. 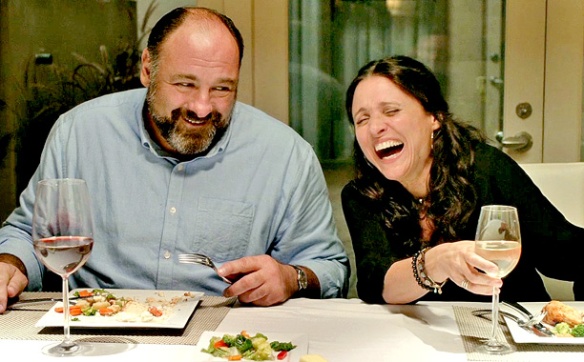 Recommendation: Enough Said serves as a heartwarming romantic comedy, but not in the most traditional sense. As strong as the material is here, though, it’s difficult not to go into this movie with far more invested in seeing James Gandolfini on a large screen for a final time. He’s both a great actor in this film and the source of many a tear forming in my eyes. He may be gone, but at least his essence is permanently captured in celluloid-form.