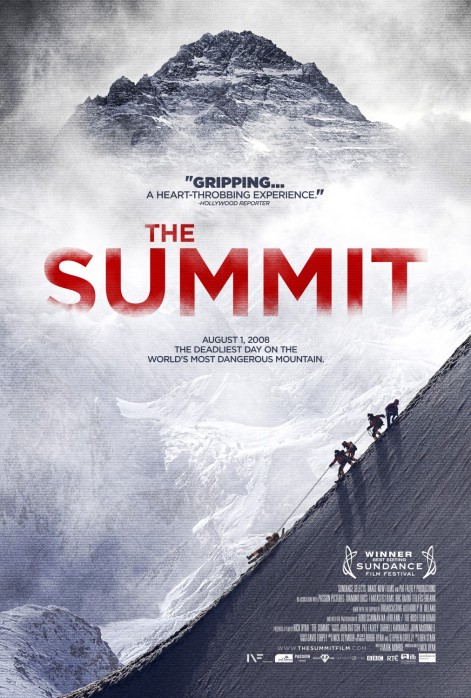 K2. Perhaps few points on Earth are as coveted as its rarely-seen, wind-swept summit — at least with the sole purpose being to simply leave the footprints behind to say indeed, you were there; you had made it.

In August of 2008 as many as 11 lives were lost on the world’s second-tallest mountain’s razor sharp ridges and unforgiving slopes during one of the most tragic expeditions attempted in its history. On the first day of the month, 18 climbers made a push for the top, each armed with the singular hope of experiencing exhilaration, discovering liberation, achieving affirmation.

Instead, what awaited them was nothing short of devastation.

The Summit, part-dramatization and part-documentary, juggles climber ethics and responsibilities, the history and politics of high-altitude mountaineering, as well as the psychology of being in the moment — a phenomenon known as ‘summit fever,’ a mental state that causes sound judgment to be compromised when in reach of the top of the peak, gets touched upon. Piecing together first-hand video documentation and convincing re-enactments, a tension-filled story is created that’s meant to reflect all of the confusion and chaos of those fateful days. While the strategy hardly diverts from the legions of other extreme-outdoor docu-dramas, it makes no attempt at providing the material in a traditional, coherent manner. This is rather unfortunate, given the gravity of the events.

It seems strange to label the recounting of an ill-fated expedition as ‘confusing,’ but the way in which director Nick Ryan wants to do the recounting is just that, and the result is an audience with more questions than answers. The scenery is jaw-dropping and the cinematography in general staggering. The Summit also employs a few inventive shots that will give any moviegoer vertigo. Thus, Ryan fulfills at least two-thirds of the requirements to make this kind of viewing stimulating.

To be fair, the event Ryan is depicting/reporting on seems to be shrouded in mystery, even to those who were caught up in it. In fact, it’s this mystique that perpetuates the story. How can so many people who are so experienced, get into so much trouble so quickly? How can 18 people begin a push for the 28, 251-foot summit and only seven return to base camp? Who was to blame for the multiple accidents and mix-ups in the Death Zone? Will we ever know the truth?

It’s really the story structure that doesn’t do this event any particular favors. We start up on the mountain quite high up in the beginning, zoning in on a group of Korean climbers who have just fallen and are dangling precariously on a section of steep slope, bloodied and unmoving. Something has gone horribly wrong, but we are not sure what that is. Nobody on the mountain does, either. Cut to the beginning of the day, when everyone is making a push from base-camp. We get some incredible insight into what goes on around there — logistics, meetings, the regular goofing around between good old boys — and all of this is extremely interesting. Too bad we keep getting interrupted by the story which continues to move around like a Mexican jumping bean.

Between trying to keep track of several parties attempting to make summit bids and those trapped down lower on the mountain undergoing individual crises, it’s difficult to keep up with who’s who, and perhaps more strangely, why some losses of life receive full backstories, while others barely get a mention. Historical/political elements factor in awkwardly as well, seeming to be more of an obligation than a contributor to the drama that unfolded in 2008.

Still, if you’re not worried about disorientation or anything like that, The Summit makes for a satisfactory enough watch and the visuals are certainly worth the while. Director Nick Ryan should be commended for attempting to set up a story that goes in a different direction than other documentaries, but it just doesn’t quite pay off for him.

Recommendation: Given the event, the mountain, and my general love for the outdoors, I walked away unable to stop feeling just a little bit letdown by The Summit. Still, it manages to deliver most of the goods. It just would have been nice to have had a stronger impression of just how messed up of a day this was on the mountain. Nothing that a little research on the internets can’t clarify, though, I suppose. . . .

Quoted: “You have to save yourself from K2.”

Keith & the Movies
Kirkham A Movie A Day

The Second Home of the Kirkham A Movie A Day Blog