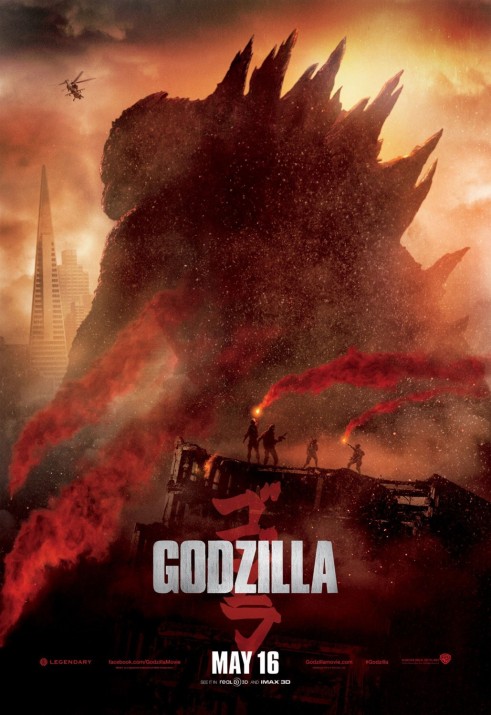 Oh, a nobody, other than the guy who’s responsible for retrofitting the world’s most famous monster for a 21st Century outing.

The British director has been in charge of at least one more monster-related movie. It was actually ingeniously titled Monsters. Now, he’s been tapped to awaken a beast living deep within our oceans — an effort, it’s hoped, that should eradicate any last vestiges of the memory of what Roland Emmerich did to the legend back in 1998. The last man to touch Godzilla controversially recast the giant lizard as some unexplained and malevolent force of nature bent on destroying uptown Manhattan. He has posed on occasion throughout his lengthy film career as the villainous type, but never did he feel as disconnected from lore or irrelevant as a threat to mankind as he did then.

Now Edwards has arrived on the scene and there’s a detectable escalating tension in the room. With a restless fan base growing ever desperate to see Godzilla as it truly wants to see him, the time is now to deliver on promises. No more messing around. No more straying from the truth. Just deliver the goods, and no one else gets upset. Or hurt.

Godzilla, the creature, receives a quality facelift in 2014. (I emphasize quality just to ensure no one here’s under the impression of an un-sexy beast; that this is the Joan Rivers of monster lizards.)

He’s so massive the cameras have to take their time in a particularly memorable, vertical panning shot, the moment his true size is revealed. He possesses a thunderous roar that will give the most hardened of ex-cons no choice but to go running for their favorite blankey; and the combination of sheer size and the way he moves in an epic, lumbering gait makes the big guy, for all intents and purposes, the standard against which any forthcoming CGI-fests are to be measured. Behold, the Godzilla we’ve been awaiting, expecting, maybe even demanding — a behemoth so positively ridiculous it couldn’t do anything but sit and wait for technology (namely, visual effects) to catch up and be able to support its very scary ambitions.

In 1999 scientists working in the Janjira Nuclear Plant in Tokyo experience a catastrophic disaster in the form of a series of earthquakes that threatens to expose the entire city to toxic levels of radiation. Joe Brody (Bryan Cranston) and his wife Sandra (Juliette Binoche) are dedicated researchers/engineers on the hunt for something enormous. As fate would have it, their dedication, a stubbornness woven into the fabric of human nature, would become a means to a very certain end.

A collaborative effort among Edwards’ three screenwriters, a trio which includes the one and only Frank Darabont, produces a screenplay that paints the human race as a mostly likable yet largely incapable species. Our sense of self-importance is quickly curtailed by the arrival of two massive insect-looking monsters the government is quick to label MUTOs (Massive Unidentified Terrestrial Organisms). Mankind’s inability to stop experimenting has ironically produced its inability to continue living in its current state, apparently. Hence, Edwards’ decision to root the Brody’s at physical, emotional and psychological Ground Zero — they are a decent, hardworking family who clearly represents the best of humanity.

While not everyone’s performance strikes the same note — the movie’s biggest crime is that Aaron Taylor-Johnson’s Lieutenant Ford Brody is on occasion a bit too dry — the cast do what they need to in order to elevate the non-fantasy component to a suitably dramatic level, while still stepping back enough to allow our own fears and concerns to boil over quietly. We have time to ponder what we would do in these people’s shoes. And while characters fail to break the mould of archetypes — Ken Watanabe’s Dr. Ishiro Serizawa might be the most irritating of the bunch, and Sally Hawkins needn’t even have bothered showing up on set her role is so limited — such is really all we need if we’re talking about retelling a classic and not reinventing it.

Godzilla is one of only a few films that succeeds in producing that gut-feeling, a fear so palpable we wish we don’t keep digging into the unknown. There’s a visceral reason to fear what we don’t understand or have never experienced. In the horror genre of today it seems copious amounts of blood and cruel, unusual ways of suffering and dying translate to “stuff that should scare people.” I mean, that works too. But it’s time the trend is bucked. Here’s a completely new taste for the palate. Packed with scintillating imagery, a generation of suspense that’s comparatively lacking in even recent superhero films, and crafted out of love and passion, the Alpha Predator is back and bigger than ever in an old-school film experience that recalls a bygone era in moviegoing.

Godzilla is smiling. How can anyone be terrified of a smiling Godzilla?

Recommendation: Quite possibly the biggest film of the summer, Gareth Edwards’ hotly debated second film understands how important it is as it handles the challenge of redesigning the beast on his 60th birthday with aplomb, with room to give plenty of attention to its A-list cast. While some characters are definitely better than others, there’s enough here to keep even the most casual attendee engaged in this global crisis. A movie that would never escape criticism, but considering the alternative (let’s never mention Dr. Nico Tattoo-lotsa-lips. . .or whatever his name was from the Emmerich version. . .) it has done alright for itself.

Quoted: “The arrogance of men is thinking that nature is in their control, and not the other way around. Let them fight.”

We've Got (Back) Issues

We're fans of genre entertainment but we do have some issues. We mainly review old stuff because nobody will give us press credentials.