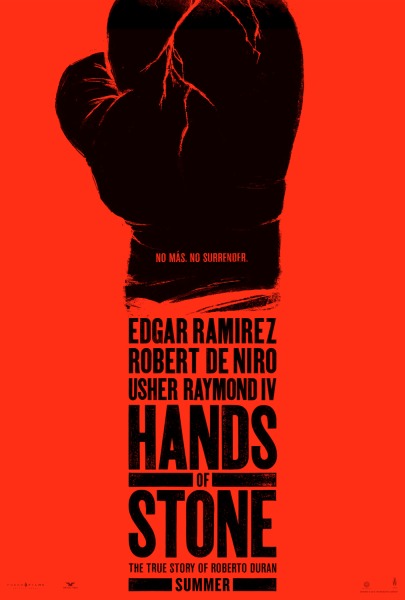 Confession time: coming into this I had no idea who Roberto Durán was — ya know, other than the fact he would be the center of attention in Jonathan Jakubowicz’s boxing drama. Do I feel silly now.

Long story short, the Panamanian has been frequently listed as one of the greatest boxers of all time, a brutal and arrogant fighter who became world champion in four different weight classes — lightweight (1972 – ’79), welterweight (1980), light middleweight (1983 – ’84) and middleweight (1989) — and who fought both for the pride of his country as well as the opportunity to lead a life free from poverty and hunger.

Hands of Stone is standard fare. Rags-to-riches tale traces Durán (Edgar Ramírez)’s rise from troublemaking youngster with a penchant for bareknuckle brawling in the slums of his hometown El Chorrillo to a magnetizing presence inside Madison Square Garden. It also suggests he may not have gone that route sans the physical training and psychological conditioning he received from legendary trainer Ray Arcel (a really good Robert DeNiro).

There’s a lot to become invested with here, not least of which being the backdrop of political tension against which the film is set, one that paints Panama and the United States in a bitter feud over who should have control of the land surrounding the Panama Canal in the years leading up to the Trojillos-Carter Treaty in 1977. The turmoil populates the film nearly as much as the in-ring sequences, though the only time it really feels impactful is in an early flashback in which an 8(ish)-year-old Durán witnesses one of his own getting shot down amidst a mass riot in front of a municipal building.

That scene feels inspired. It’s both intense and visceral, and gives us plenty of reason to get behind el hombre con ‘Manos de Piedra’ early on. That same mechanism for empathy grows more interesting as Ramírez’s notably excellent performance steadily reveals there are many aspects to his character that you just can’t support. It’s a performance that treats the boxer like a human, deeply flawed and at times quite unlikable, sculpted very much by his harsh upbringing and, later, further scorned by the business of boxing at large.

DeNiro inhabits the trainer with the confidence and emotional heft you come to expect from the veteran — veteran, in this case, being applicable both to his experience in film as well as around the ring. A raging bull he is obviously not here, and don’t expect him to jump into the ring and throw any cheap shots on his fighter’s behalf. Finding him on the other side of the ropes, however, is by no means an indication of a career trend. Time and again DeNiro reminds his fighter (and us cheering in the peanut gallery) that boxing is as much about the head as it is about the fists. He brings a strong “kid, just think for a second!” psychology to the narrative, a kind of paternal figure that Durán often seems to enjoy ignoring in favor of reverting to his more natural, street tendencies.

The characters are quite strong in Hands of Stone. Maybe not as strong as stone, but they’re memorable. And if not memorable, attractive: Ana de Armas as wife Felicidad Iglesias begins life in the movie as a hard-to-get type in a schoolgirl get-up, but she’s not as vulnerable as she looks. She’s smart and has plenty reason to shun a man coming from a much less fortunate background. Unfortunately she does get reduced to precisely the kind of trophy wife archetype you would expect. When she’s not being shoved into the background, Cuba’s very own Scarlett Johansson has great presence.

Regrettably Jakubowicz adopts a very workmanlike approach to both the study of a life less ordinary, and he doesn’t handle the significance of Durán’s fights very confidently. A few major moments are worth mentioning, like the infamous November 1980 rematch between Durán and former lightweight world champion Sugar Ray Leonard (Usher Raymond IV), during which Durán abruptly stopped fighting, refusing to “fight a clown.” Despite moments of intrigue inside it, the saga out of the ring plays out like one long run-on sentence. There’s a great deal of contrivance in the construction, not to mention more than a few sequences feel haphazardly sown together. There are other similarly nagging issues but I’ll just get over those.

Because, let’s get real: boxing movies are, more often than not, only as good as the fights themselves, and though Hands of Stone doesn’t offer any true hard-hitting moments, they’re staged well enough thanks to a sound effects team that knows how to deliver the devastating power behind Durán’s fists. I felt I got to know this guy fairly well; I only wish Jakubowicz could have been able to deliver the same kind of power with all aspects of his film. 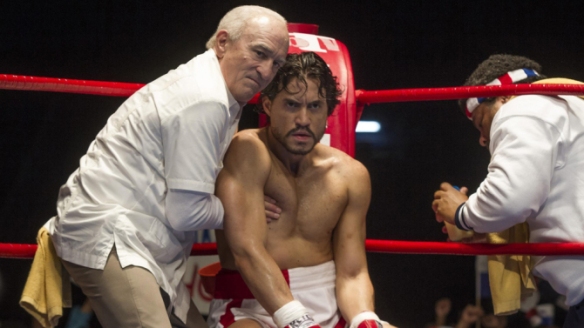 Recommendation: Ramírez brings the intensity and passion, DeNiro gets in touch with Arcer’s Jewish heritage and gets to spout some Yiddish (which is just . . . amazing, by the way, if you’ve ever wanted to hear DeNiro calling people schmendricks), and Ana de Armas sizzles. The characters are strong, but the story leaves a lot to be desired.