We are somehow at Day #7 in Decades ’16. Man, how time flies! Once again, this second edition is being co-hosted by myself and the one and only Mark from Three Rows Back, where we’ve been asking bloggers to share their thoughts on films that were released in any year ending in a ‘6.’ We’ve been posting a review per day, while re-blogging the other’s posts accordingly. This has once again been a brilliant event, and today’s entry from Mark of Marked Movies fame is further proof. He takes a look at Richard Linklater’s curious animated feature A Scanner Darkly. Take it away Mark!

In 2001, director Richard Linklater delivered a little-seen, gem of a film called Waking Life. Many didn’t pay notice to it which is one of many a film viewer’s biggest mistakes. Granted, the philosophical material may not have been everyone’s idea of entertainment but this film pioneered a filmmaking technique that, simply, shouldn’t have been overlooked. Linklater approached Waking Life with an animation method called “rotoscoping”. Basically it was animation added over live actors and it’s a process that can be painstaking to deliver. The results were hugely effective for the material and, five years later, he decided to use the technique again on his adaptation of Philip K. Dick’s paranoid science fiction novel, A Scanner Darkly. Once again, the results are very impressive. 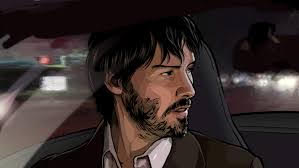 In the near future, Bob Arctor (Keanu Reeves) an undercover cop, is given the assignment to bring down a vast network of drug distribution, dealing in “Substance D” – which is highly addictive and mind altering. He fully immerses himself in the lifestyle, to the point were he has become an addict himself and even his superiors don’t know his cover story. As a result, they order him to spy on himself. Being under the influence regularly, it causes him to lose his grip on reality where nothing is clear anymore.

Before this film went into production, it had gained interest from a couple of notable players in the film industry. Director Terry Gilliam was interested in the early 90’s and screenwriter Charlie Kaufman had actually drafted a screenplay that was eventually unused once he became more sought after following the success of Being John Malkovich. One can only wonder at what might have become of an adaptation had they been involved but that doesn’t lessen the fact that Linklater does a sterling job here. For a start, his decision to implement the “interpolated rotoscoping” animation again is a stroke of genius. On Waking Life it complimented the existential dream-like story and it’s used similarly on this film. It’s a technique that could be in danger of overuse but when the story and characters themselves are operating from an occasional surreal point of view, rotoscoping is perfectly fitting. It serves as a metaphor for the characters’ drug induced alternate realities and allows us to identify with their paranoia and the struggle with their personal identity. You’d be forgiven for thinking that it might take away from the actors’ performances but it doesn’t. In some ways it enhances them. Reeves is an actor that has came in for some criticism throughout his career but he’s really rather good here and the support, from Harrelson and especially Downey Jr, is excellent. Who better to be included in a film of substance abuse than a couple of actors who have dabbled with both herbal and chemical remedies in their time? 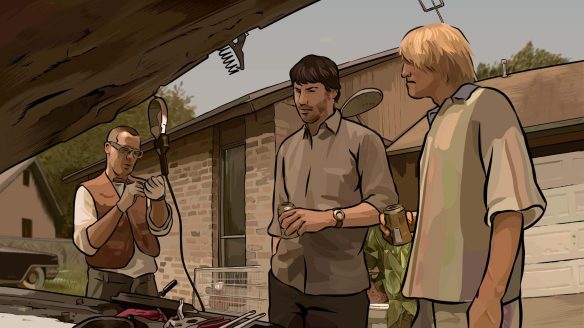 The script is also very faithful to Philip K. Dick’s own source material. You can tell Linklater has invested a lot of his time in adapting, what is essentially, some of Dick’s own paranoid thoughts – he was heavily involved in the abuse of amphetamines and psychedelics at the time of writing it – and explores the usual themes involved in his novels; the sociological and political aspects of human society under the control of an authoritarian government. If your a fan of Dick’s musings then you’ll find them all here. Some may find fault with in the film’s slightly lethargic pace but the visuals and thought provoking content are so captivating that the pace can be forgiven. Sometimes Philip K. Dick’s stories are not afforded the proper treatment in movies; there are stinkers like Nicolas Cage’s Next and Ben Affleck’s Paycheck but this ranks very highly alongside the successful adaptations like Total Recall and Blade Runner. 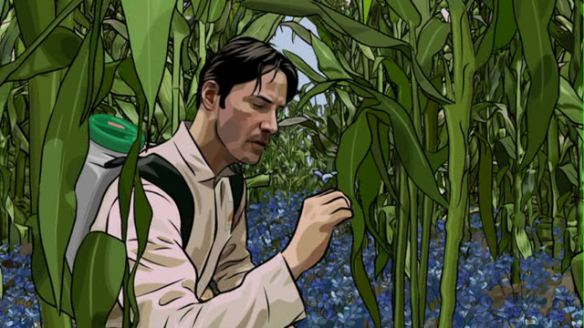 Linklater’s attention and commitment to Philip K Dick’s challenging material pays off and he produces a thought-provoking head-trip of a film that delivers both intellectually and visually.

Hey there one and all! Well it pleases me greatly to announce the official line-up of the 2016 Decades Blogathon, and so quickly. Thank you for responding so quickly and Mark and I both look forward to jumping in here and reading what you all have to say about your chosen movies. Once again this year we have an impressively eclectic selection of titles, and that’s just the way we like it.

So here’s how things are going to play out. Once again, there will be one review posted each day either on this site or on Three Rows Back, and whichever site it doesn’t go up on first, it will be re-blogged there on that day.

Posts are ordered on a first-come, first-serve basis. Which means our esteemed blogging machine Rob from Movie Rob kicks things off in style with his review of Top Gun (1986) — (way to pick a classic, Rob! 🙂 ) — and Mark, the brains behind this whole operation, will conclude things with his thoughts on Taxi Driver, which came out the decade prior.

I guess I could also mention when you can expect to see these posts start going up. We have decided that Monday, May 16 will be the first day of posting. Please have entries in latest by Friday the 13th, that way sloths like me will have time to sort through the reviews and get them formatted and set-up for presentation.

Because the spots filled so quickly this year, we’re anticipating a few late requests. Though we won’t be able to expand the pool to more than 20, last year we had one or two people duck out of the race at the last second, so if you find yourself on the outside looking in, you might just have a chance to get in if you let us know soon. If someone does drop out, those spots will be yours (again, on a first-come, first-serve basis). Thanks for your interest everyone and we look forward to getting this thing rolling on the 16th.