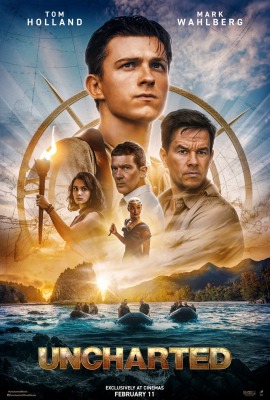 For the uninitiated, Uncharted is a popular series of video games that debuted on Playstation 3 in 2007. Hate to say it, but the 2022 movie adaptation starring Tom Holland and Mark Wahlberg will not be considered the standard-setter its source has become heralded as. Hardly anything in the movie qualifies as bad, but just as much is actually worth remembering in the end.

Relying on good, old-fashioned movie star power to provide some sense of personality, Uncharted follows adventure-seeker Nathan Drake (Holland) on a quest to find out what happened to his older brother Sam (Rudy Pankow) who disappeared from his life when circumstances forced him to leave the Boston orphanage they grew up in. Whip ahead 15 years and Nate, now a bartender in New York who pickpockets patrons for minor thrills, is given an opportunity to put his specific skillset to better use.

A sleepwalking Mark Wahlberg plays fortune hunter Vincent ‘Sully’ Sullivan. More loyal to money than to people, Sully is as basic a character as they come and the portrayal does not exactly go above and beyond. He is after a massive treasure chest stashed away by famed explorer Ferdinand Magellan. He thinks he knows its general location but needs Nate’s help in pinpointing it. More valuable to Nate however is what Sully may know about his brother’s fate.

So they reluctantly team up, a career opportunist and a naive newbie working together about as well as oil and water as they assemble various valuable pieces (a key, a diary, a map) in an increasingly complex puzzle. However some of the pieces require further assistance to access, and so an already awkward partnership is further destabilized when they rendezvous with Sully’s contact Chloe Frazer (Sophia Ali) in Barcelona. Mysterious and shifty, she’s a veteran of Sully’s game of deception and will do whatever it takes to ensure history will not repeat itself.

In the villainous camp we have Santiago Moncado (Antonio Banderas) who, as the last living descendant, is desperate to restore the Moncado name in view of the historical embarrassment of his ancestors having lost the treasure. Banderas brings some menace but ultimately he’s outshined by the striking-looking Tati Gabrielle, who dials up the intensity as Jo Braddock, a ruthless mercenary who has her own designs on Moncado’s long lost loot.

All these competing interests theoretically make the movie more involving, especially when you have a dysfunctional group of good guys to keep an eye on as well. Because everything is so safe and routine the competition is not as exciting as it should be. However Uncharted comes more to life in the stunt work, which is kinetic, often inventive and infused with a decent amount of comedy. Peter Parker’s Cirque du Soleil moment at an art auction and the grand finale where everything is literally up in the air are memorable passages in a voyage that’s content to skim the surface of its themes and ride almost entirely on the likability factor of its in-demand leading man. 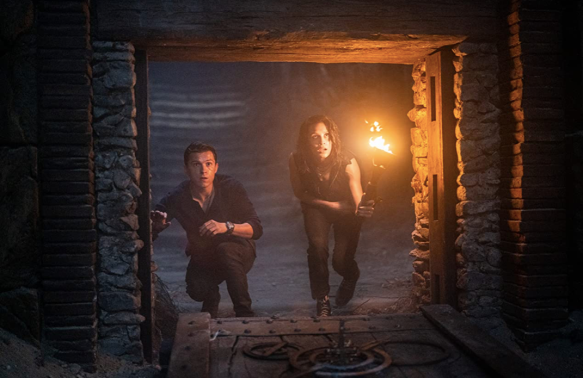 There’s no ‘I’ in TEAM. But there is a ‘ME’ if you move the letters around

Moral of the Story: Uncharted is an undemanding escape in which the compass always points to the wreckage of superior adventure films. The title is a misnomer for a film that is the very definition of average, one that shows the challenges of translating active participation of gameplay into the passive entertainment of movie watching. It’s entirely inoffensive and easy to get along with but if you’re looking for a more robust adventure, check out a younger, pre-Spidey Tom Holland in 2016’s underrated gem The Lost City of Z.

Quoted: “Nuns. Why is it always nuns?”