Shawn Levy’s sentimental time-traveling adventure The Adam Project is a Netflix “original” that stretches the term to its breaking point. The story it tells may be hopeful but from a creative standpoint it feels hopelessly generic.

The Adam Project revolves around the alluring idea of tinkering with the past in order to change an unpleasant future. Like Levy’s previous film, 2021’s Free Guy, the overall experience plays light on logic and heavy on the feels, except here the reliance upon deus ex machina is even more pronounced; this is time travel by way of Sterling Archer, a little more sober and polite perhaps, but no less farcical with the sheer number of things working out at just the right time, on the first try, on the last gasp of fuel.

Adam Reed (no, not that Adam Reed, but the one played by Ryan Reynolds) is a fighter pilot from the year 2050 who crash-lands in 2022 en route to 2018 where he hopes to find his missing wife, Laura (Zoe Saldaña). She’s gone back to terminate an Evil Future Woman from taking over a time traveling device and using it for her own vaguely nefarious purposes. Adam’s plan is complicated when he realizes he has conveniently landed at the very location of his old house, a quaint little pocket in the woods where he encounters his pre-teen self (Walker Scobell).

Less convenient are the circumstances into which he has accidentally plopped himself down. It’s been about a year since the sudden death of his father Louis (Mark Ruffalo), a brilliant scientist, and both young Adam and his mother Ellie (a disappointingly under-used Jennifer Garner) are coping in their own way, which for the former means giving the latter a really hard time and making her worry about his future. Older Adam, nursing a wounded leg and stressing over his wife’s fate, lacks the temperament to deal with his younger self’s so-called problems and his many questions.

Two-time Oscar-nominated Catherine Keener meanwhile has ditched teacup-tapping hypnosis for an admin position at some Skynet-adjacent tech conglomerate. As the movie’s big bad, Maya Sorian, Keener hardly gets to demonstrate her abilities. (Although her character does pull double duty, manifested in the future and past — the “past version” being a poor CGI approximation that makes Rogue One-era Peter Cushing look like the Rolls Royce of digital renderings.)

The Adam Project is a diverting, fantastical adventure that, in its nascent stages, teases something special. In the end, and after so much disaster effortlessly averted, the one thing it cannot escape is its lazy, written-by-committee feel. Moving from one plot beat to the next like a tourist scooted on along by an impatient guide going through the motions, the writers seem more interested in silly song placement than getting serious about the implications of what they have set up. The film is amiable, in large part due to the cast, but it is also forgettable — a creative sin the previous Levy/Reynolds collaboration managed to avoid committing, if barely.

Moral of the Story: Steven Spielberg and George Lucas are two names that never appear in The Adam Project, but they’re two names I could not get out of my head all throughout, from certain action sequences to the tonality of some conversations and the sentimentality that is laid on pretty thick. Not a bad movie by any means, but like so many Netflix “originals” there is a lot of potential that goes unfulfilled.

Quoted: “I spent thirty years trying to get away from the me that was you and, I’ll tell you what, kid; I hate to say it, but you were the best part all along.” 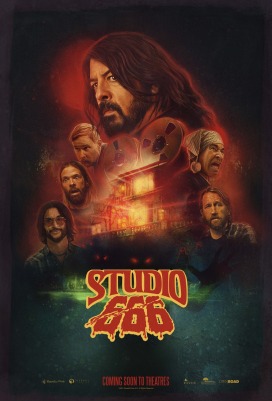 Foo Fighters frontman Dave Grohl is a man possessed of more than musical talent in Studio 666, a gore-soaked, gleefully over-the-top horror comedy from director B.J. McDonnell, one in which the popular American rock band battles both creative droughts and supernatural forces during the recording of its tenth studio album.

With their obnoxious manager Jeremy (Jeff Garlin, one of the film’s few professional actors) breathing down their necks for the next hit, the Foos find themselves up against a wall as they brainstorm ideas for their landmark record. When they’re informed of a creepy old house in Encino, California, a sad-looking forties-era manor that has more than great acoustics going for it (and where the band put together its actual tenth album, 2021’s Medicine at Midnight), an optimistic Grohl jumps at the opportunity, enamored with the character of the place.

But as the band settles in the writer’s block hits hard and the typically ebullient musician starts to lose his cool, resorting to Youtube instructional videos and plagiarizing Lionel Richie all night long. Then he discovers a demo tape in the cellar, along with some other gubbins, and let’s just say things are never quite the same after that. As Grohl’s behavior deteriorates, a collective effort to complete a full-fledged record morphs into a nightmarish and one-sided obsession with finding an ending to a single song, a soul-sucking process that begins to tear the group apart figuratively and literally.

From electrocuted roadies and barbecued bandmates to decapitated delivery boys and mangled managers, this ridiculous horror-comedy makes sure you’ll remember the red syrupy stuff. Yet despite the former Nirvana drummer’s boundless supplies of energy and enthusiasm, Studio 666 fails to find a consistent rhythm with too many dead spots in the narrative where the camera just seems to roam the house, looking for something interesting to capture. Invariably the lightweight story meanders, leaving you with time to think about why John Carpenter’s score is more memorable than the music being produced by the actual musicians.

The writing doesn’t do the inexperienced actors many favors, either; drummer Taylor Hawkins, guitarists Pat Smear and Chris Shiflett, bassist Nate Mendel and keyboardist Rami Jaffee are predictably (dare I say acceptably) wooden in moments of high drama but surprisingly are also unconvincing during the quieter moments where they’re just hanging out, the band’s natural, time-tested camaraderie coming across more forced than it ought to. By contrast Grohl rocks pretty hard, his notorious perfectionism making him an ideal candidate for the role of Obsessive Compulsive Psycho, one that is part-trope, part-send-up of the trials and tribulations the band went through when putting together their official debut album, 1997’s The Colour and the Shape.

Despite a nagging sense of unfulfilled potential, Studio 666 is a far cry from dire. Based on a story conceived by Grohl and written by Jeff Buhler and Rebecca Hughes, this is a novelty film where you have no problem believing those involved had a blast making it, and occasionally that enthusiasm possesses us as well.

Killer riffs but where’s the soul?

Moral of the Story: Though Studio 666 couldn’t be much gorier, it could in many instances be funnier and more impactful. Diehard fans of the band however are going to have an easier time overlooking the things the movie does not do so well.