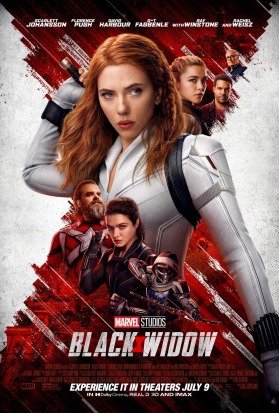 Timing is everything. This applies, painfully so, to Black Widow, a film that feels compromised in a way few Marvel movies have.

In her first foray into the Marvel Cinematic Machine director Cate Shortland finds herself in an incredibly difficult position. Twenty-four films deep into a shared universe that has now spun off multiple streaming shows, she is tasked with compressing both origins story and swan song into one entertaining package. Black Widow‘s out-of-sequence placement burdens the filmmaker with a number of difficult creative choices, most notably how much nuance she can bring to a story that ostensibly dives into the emotional interior of one of the foundational members of the Avengers.

Hey, at least they finally got the damn thing made. Scarlett Johansson* may have had to wait 11 years, 20 films and her own character’s killing off to earn what Robert Downey Jr. got three times in five years, Chris Hemsworth three in six and Chris Evans twice in three,** but the only resentment you sense from Natasha Romanoff in her eighth and likely final MCU appearance is reserved for Dreykov (Ray Winstone — Noah; The Departed), the Russian psycho who brainwashed and tortured her and her ‘sister’ Yelena Belova (a scene-stealing Florence Pugh) as young girls, along with countless others from all over the world, into becoming an army of perfect assassins.

A bittersweet prologue sets us all up for a rude awakening: a seemingly normal American family in 1995 Ohio is suddenly compelled to make a break for Cuba after being discovered as the Russian sleeper agents they actually are. ‘Father’ Alexei Shostakov (David Harbour) and ‘mother’ Melina Vostokoff (Rachel Weisz) have been keeping their ‘children’ Natasha (here played by Ever Anderson) and Yelena (Violet McGraw) sheltered for as long as they can but a sad twist of fate shatters the illusion, the daughters separated and handed over to Dreykov and eventually sent to a nebulous place called the Red Room, a hovering fortress in the sky that could have been cribbed from a Pink Floyd concept album.

Cut to the present (which is still the past) and Natasha’s on the run from U.S. Secretary Thaddeus Ross (William Hurt) after giving him and his Sokovia Accords the one-finger salute. Her nomadic lifestyle in Norway is short-lived with the arrival of the mysterious mercenary Taskmaster, drawn to an item our hunkering-down hero is unwittingly in possession of. After a violent showdown on a bridge, Natasha escapes to Budapest, where another David Leitch-like round of punishingly awesome fight choreography awaits. Here, reunited with her former sis, Natasha discovers the true extent of Dreykov’s control and power, along with a possible solution to the problem.

Post-Budapest and the spy thriller dynamic evolves into more of a dysfunctional family team-up as the pair resolve to get the old gang back together in order to take down the brute who irrevocably changed them and free the other Black Widows from the same violent servitude. The process of course mandates that mom and dad also confront their own separate, lived-in realities and their culpability in this whole mess, leading to the film’s signature scene (awkward family reunion, anyone?) — an emotional catharsis for all involved. Turns out, reliving the “good old days” is tricky to do when the good old days are your own Tahiti (what a magical place).

Black Widow is a Phase 4 debutante that is much better when grounded instead of going for literally atmospheric, generic spectacle, with some of the quieter moments packing as much of a punch as the intense fight sequences. However, the timing of the whole thing magnifies certain issues. Eric Pearson’s screenplay is not compelling enough for a film this late in the game. And considering the hefty themes in which it traffics and the cast of characters at its disposal there is enough content here to make two films. Instead the exploration of trauma and disillusionment feels rushed and harried by the “Make it count!” business mentality governing its singular existence.

Ultimately the performances save this from total mediocrity. Johansson has kicked ass from her Bechdel Test-failing introduction in Iron Man 2 (2010) through to this bitterly short-lived end, saving her most somber performance for last. Yet even in her own movie she is to some degree playing second fiddle. That’s less of a problem when the reason is Florence Pugh, who might well be stretching her legs for her own MCU run. Let’s just hope it doesn’t take quite as long — in real time or otherwise — to get that going.

* I am considering reviving the Scarlett Johansson Project. I feel bad leaving that one incomplete. Would anyone be interested in seeing more of those kinds of posts? Show of hands in the comments below, please!

** I do not include Captain America: Civil War in that list considering that is more of an ensemble film than a true stand-alone entry. But, sure, go ahead and add it. Even more to my point.

Moral of the Story: An uncharacteristic end-zone fumble for MCU President and ball-cap enthusiast Kevin Feige, Black Widow feels rather shortchanged by the finite space into which it has been forced to exist. On one hand, you might look at the movie multitasking as both origins and send-off as a unique thing. I don’t know any other MCU installment that has had to do that. On the other, you can’t help but feel Natasha Romanoff deserved more than what amounts to the cinematic equivalent of a hit single.

Quoted: “Tell me, how did you keep your heart?”

Check out the Final Trailer for Black Widow here!