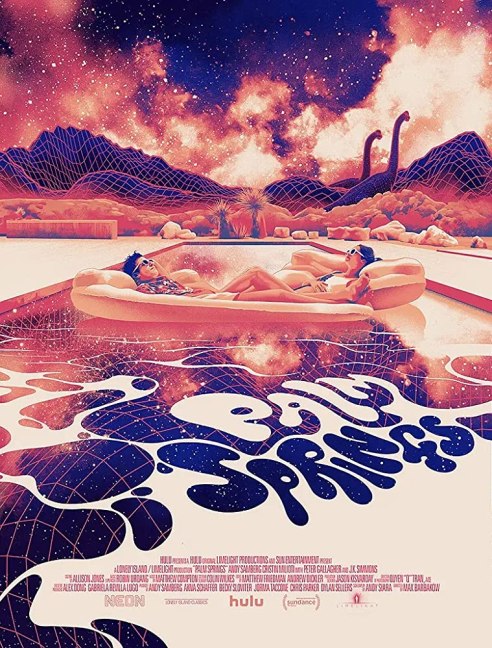 Palm Springs, a buzzy new Hulu original starring Andy Samberg, Cristin Milioti and J.K. Simmons, for me has an unusual distinction. This romantic comedy about two strangers stuck in a time loop at a wedding boasts one of the best post-credits scenes I’ve seen in a long time. It seems like such a small thing, not even worthy of mentioning in a review much less in the lede, but the closure it provides is just so satisfying it improved my opinion of the movie overall.

That might seem like a slam against everything preceding it. It’s not. Max Barbakow’s modern reinvention of Groundhog Day is far from perfect but it is very enjoyable and it ends in a way that sends the audience off on a high. Any movie that has the potential to get fresh eyeballs on that Bill Murray classic is okay by me. Palm Springs is perhaps even an homage to it, with lines like “it’s one of those infinite time loop situations you may have heard about” seemingly gesturing in the direction of the late Harold Ramis’ beloved 1993 comedy, or at least, toward a recent history of films inspired by it.

Harder to ignore is the fact the famously goofy 42-year-old positions himself as an intensely cynical, occasionally even unlikable leading man who has to get over himself in order to break free of the barely metaphorical cycle of living without purpose or fear of consequence. Samberg is Nyles, a drifter doomed to wake up on the same day in November ad infinitum. He takes the expression “going through the motions” to a whole new level with his presence at a wedding for Tala (Camila Mendes) and Abe (Tyler Hoechlin). His only connection is his high-maintenance girlfriend Misty (Meredith Hagner), who is in the bridal party.

Groundhog Day fans already know the drill: Nobody else is aware of his situation, and nothing he does seems to change it, not even multiple, technically successful, suicide attempts. After being stuck here for an indeterminate amount of time Nyles’ ability to care has been worn down to a nubbin. Then, during one loop, he introduces himself to Sarah (Milioti), who sticks out like such a sore thumb due to her visible discomfort in seeing her younger, far more successful (and selfless!) sister get her happily-ever-after that it kind of amazes me how Nyles does not pick up on this any sooner.

Mostly this is because the script from Andy Siara prefers giving the former SNL star the space and time to do his sketches rather than worrying too much about internal logic. Not for nothing, there are some really creative inventions as the filmmakers play around with the character’s prescience. A memorable sequence early on has Nyles going through a dance sequence so bizarre no person would possibly be able to pull it off without his “experience.” It also is a really fun way to get the two main characters to initially hook up. Of course, just as things are turning amorous a series of crazy happenings causes Sarah to fall into the same trap Nyles has been stuck in. All I will offer is that it involves a crazy-eyed, face-painted J.K. Simmons wielding a bow and arrow, and a cave of glowing light.

Palm Springs not only asks you to suspend disbelief for a minute (or two, or depending on how cynical you are, maybe 90) but it also seems like one of those movies that would rely heavily on dramatic irony. However it moves surprisingly quickly beyond that, evolving into a quasi sci-fi adventure and thereby making Sarah a more interesting, smarter character. When she comes to accept what’s happened, she proves to be very (and darkly hilariously) solutions-oriented, especially when she learns a little bit more about the guy she’s stuck here with. Time loop movies can go to some dark places and Palm Springs, despite its tropical setting, is no exception.

For a story steeped in the tradition of two icy hearts gradually warmed by shared intimate experiences, we don’t really get a lot of character development. Interestingly Sarah feels like a more fleshed out character than does Nyles. That feels like a first. Generally speaking Palm Springs relies on actor personalities. For example, J.K. Simmons. Every time I see him in a movie — with the notable exception of Damien Chazelle’s Whiplash — I just want to kick back with a stogie and a glass of whisky with the guy and just shoot the breeze. Less involved but also fun are Peter Gallagher as the father of the bride and the wonderful June Squibb as an older wedding guest. And though the conclusion is patently predictable, I just cannot deny the warm fuzzy it leaves you with.

Recommendation: Andy Samberg plays one of his more “unlikable” characters that I can recall. I put quotes around that word because it’s just really hard to gauge where his attitude stems from — bad childhood? Too many loves lost? Parental issues? Wtf is his deal? The movie isn’t great on character development. But it is big on mood and ideas, and that’s plenty enough for me to give this a hearty recommendation to fans of smartly done romantic comedies.

Quoted: “I can’t keep waking up in here. Everything that we are doing is meaningless.”