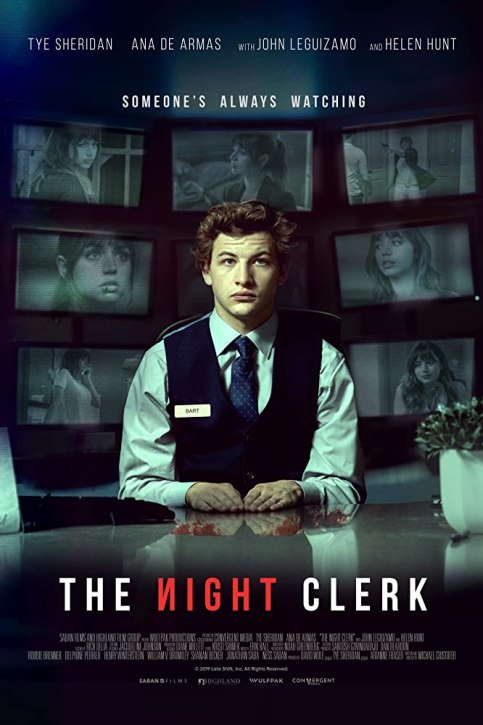 In fact it works so much better when considered as a character piece that any other label feels like an irresponsible misnomer. If I were compelled to review this movie accordingly (that is, as a crime drama/mystery), then writer/director Michael Cristofer has just redefined the slow-burn with The Night Clerk‘s super-cautious, almost tedious tip-toeing toward exculpation. Viewed through this lens this Netflix film becomes quite possibly the most uneventful crime drama you’re going to see for some time.

Bart Bromley is our conflicted main character, a hotel clerk with Asperger’s played by Tye Sheridan, a young actor seemingly born for stardom having graduated from high-quality dramas such as The Tree of Life and Mud into full-blown Spielbergian spectacles. The Night Clerk offers him a chance to strut his stuff as a legitimate leading man and Sheridan does not waste the opportunity, providing a complicated protagonist whose humanity extends beyond a neurodevelopmental condition many movies have been guilty of identifying as their character’s most significant trait. He pours into the performance a sincere commitment to the details: struggle with eye contact; lots of long-winded, one-sided conversations; a level of self-awareness that nods toward him falling on the high-functioning end of the spectrum.

After what is basically another routine shift change — save for the fact his co-worker, Jack (Austin Archer), arrives 15 minutes early to relieve him, something Bart’s endearing meticulousness does not allow to go unnoticed — he witnesses the woman he recently checked in getting assaulted by an unidentified man who comes to her room. He’s privy to the drama due to his rigging up of small cameras around the room, which he has linked to half a dozen monitors back at home in his basement-level bedroom and through which he studies other people’s behavior so as to improve his own social interactions. Bart’s reaction to what he sees sets the action, as it were, into motion and a criminal investigation follows.

The Night Clerk is driven more by mood and feeling than mysterious twists and shocking reveals (the movie does present some of those, though shocking might be putting it too strong). Cristofer’s screenplay really drills into the loneliness, creating an environment in which Bart’s relationships with everything are fleeting and mostly experienced at a distance. It’s a tough circumstance because if Bart’s voyeuristic approach seems creepy, it definitely is, and yet the more direct route to getting to know people, learning how to “blend in,” is often barricaded by the insensitive, ignorant attitudes of others.

The humanity it seeks justifies both The Night Clerk‘s glacial pacing and its flirting with the basic structure of a crime mystery. While it has some activity going on in the background the story spends most of its time inside Bart’s head and heart as he wrestles with his increasingly strange predicament. To Detective Espada (John Leguizamo) the body language and passionate over-explaining are big red flags. To Ana de Armas‘ beautiful and mysterious Andrea Rivera, the movie’s great anomaly who accesses Bart in a way not even his mother (Helen Hunt) has been able, his social awkwardness is more charming than off-putting.

The Night Clerk manages to strike some poignant notes in its observation of a life lacking the nutrients of social connection. It plays with morality and culpability in some interesting ways, not quite absolving anyone from some kind of guilt. Everyone in this movie does something wrong. As far as unraveling the sordid crime, it’s nothing a gumshoe couldn’t solve. The worst thing about The Night Clerk, as is often true in social situations, is the inaccurate labeling. 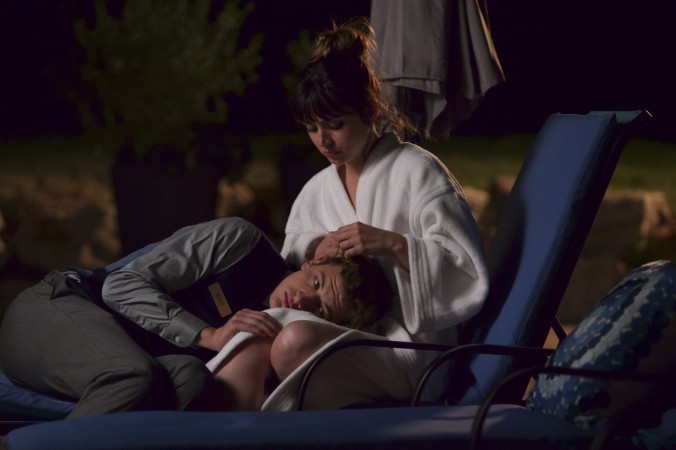 What is this pain in my heart?

Recommendation: If complicated resolutions are what you seek, you should probably avoid checking in with The Night Clerk. For a great performance from Tye Sheridan and a rare sighting of Helen Hunt (!) you might want to pay attention to the details here. It’s a good movie, and even better if you just don’t think of it as a crime drama.

5 thoughts on “The Night Clerk”