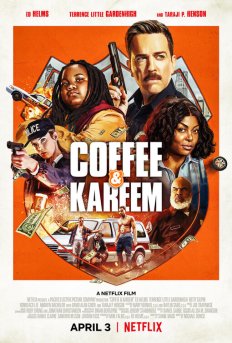 I really like Ed Helms. He is an actor I apparently will follow even into the seedier, more desperate corners of Netflix. I don’t know much about director Michael Dowse, other than the fact his résumé is populated with such silly titles as It’s All Gone Pete Tong (2004), Goon (2011) and Stuber (2019). Now there’s Coffee & Kareem, a ridiculous, over-acted (and, at times, ridiculously over-acted) crime comedy set in Detroit where the only things being enforced are stereotypes about white cops and black citizens.

Objectively speaking, this movie is uh, it’s . . . well, not . . . uh, not very good. Did I laugh, sure. I suppose the more accurate word would be giggled, like fans of Anchorman do the first six times they listen to Steve Carell utter random nonsense. That doesn’t mean I didn’t feel kinda bad about it later. Coffee & Kareem is a really crass movie that annoyingly uses racism for the basis of most of its comedy. The crime is that this Netflix “original” casts the likable Helms as James Coffee, a feckless cop who gets swept up in an increasingly violent and ludicrous conspiracy plot involving dirty cops and inept criminals.

The cards are stacked against Coffee from the moment he appears on screen rocking a “molester ‘stache.” He’s the laughingstock of the precinct and Detective Watts (Betty Gilpin) has it out for him. He gets demoted after allowing a criminal to escape his squad car, which, yeah that’s justified. What isn’t justified is the violent plot being fomented against him by his girlfriend Vanessa (Taraji P. Henson)’s bratty teenage son Kareem (introducing Terrence Little Gardenhigh), who already harbors a disdain toward white cops. But this is personal, so he seeks help from a thug to scare away Coffee once and for all. Actually, he wants him crippled from the waist down. He’s a charming kid, one who makes the foul-mouthed child actor from Role Models look like an angel.

In step one of like, a thousand in this grand plan to show his commitment to getting to know the family Coffee reluctantly gives sweet little Kareem a ride to his friend’s in a bad part of town, but really he’s inadvertently expediting his own wheelchair-bound fate. Kareem then witnesses the murder of a cop and soon the two find themselves scrambling to escape a trio of thugs (RonReaco Lee; Andrew Bachelor; William ‘Big Sleeps’ Stewart) and then things go really pear-shaped when Vanessa becomes involved. Hell hath no fury like a mother tased by her own child, and later assaulted by the same thugs after her son.

If cliches were a crime, screenwriter Shane Mack would be doing hard time. If predictability were its only offense, Coffee & Kareem might have gotten away with just a slap on the wrist. I get it; madcap is supposed to be high-energy and kind of crazy, but this particular story just falls apart the further it progresses. The wannabe-gangster kid becomes an irritant while the adult actors flounder. Helms is given few scenes in which he can shine, and Henson even fewer (though she does get one of the film’s highlight scenes in a motel room when she gets to open a can of whoop-ass on her assailants). Meanwhile, Gilpin has to be a better actor than what I’ve witnessed here.

With sloppy attempts at social commentary, ridiculous caricatures and often shockingly violent exchanges Coffee & Kareem is, in the vernacular of kids these days, a bit extra. 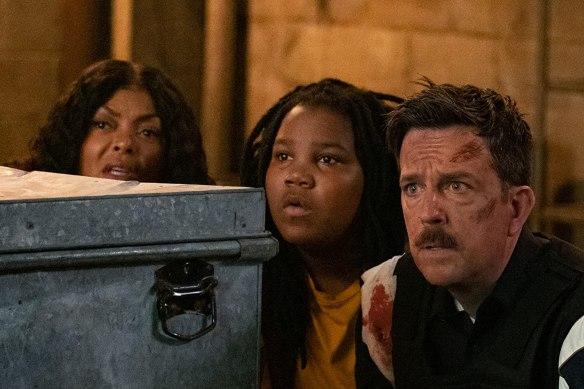 Moral of the Story: Contrived odd couple comedy shoots for the heart but ends up hitting you right in the crotch instead. Fans of Ed Helms could leave disappointed with what he’s able to contribute. And I think I need to see another movie with some of these other actors (specifically Gilpin and Gardenhigh) in them before I make a decision on them. But on this evidence alone, yikes . . .