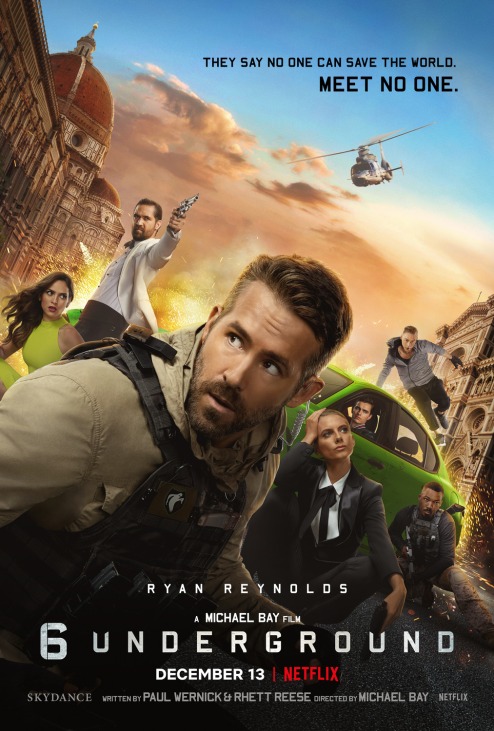 It’s my fourth week of isolation and while we’ve got a way to go still before we can socially un-distance, I’m pretty sure I’ve just hit a low point. I am now inviting Michael Bay in to my living room to give me some company. What an insult to Tiger King that I prioritized this spectacle of awfulness over it. Bay’s latest happens to be his first ever direct-to-streaming offering, so I thought there might be something different about 6 Underground. Something, oh I don’t know, more restrained about it. That’s cute, Tom.

6 Underground vomits two hours of non-stop destruction of city monuments and human bodies that could have been trimmed to 90 minutes if you cut out all the fancy slow-motion shots. In what passes as a story barely held together by duct tape editing, a crew of six (or is that seven?) vigilante agents fake their own deaths in order to take on the Great Evils of the world without having to deal with all the government red tape. In this movie, one of an inevitable many, the bad guy is a tyrannical dictator named Rovach Alimov (Lior Raz), who rules a fictitious Middle Eastern country through brutal violence and threatening the people through state-run media.

These ghost agents aren’t referred to by their names but rather their numbers, because getting personal proves really tricky when you’re busy saving the world. ‘One’ is a billionaire played by Ryan Reynolds. He’s Team Leader and this quasi-genius who has made his fortune on magnets. The half of 6 Underground that isn’t spent on things blowing up in a fireworks display or peering up women’s skirts is dedicated to a sloppily constructed, disorienting montage where we learn how the others have been seduced into contributing to his humanitarian efforts. ‘Two’ (Mélanie Laurent) is a CIA spy; ‘Three’ (Manuel Garcia-Rolfo) a hitman; ‘Four’ (Ben Hardy) a parkour runner/thief; and ‘Five’ (Adria Arjona) a doctor.

The story begins with an Italian job gone to hell that culminates in their driver/’Six’ getting violently and fatally impaled, meaning Dave Franco gets a mercifully small role to play in this farce. He’s replaced by an Army sniper (Corey Hawkins) who is suffering survivor’s guilt after a mission in Afghanistan goes wrong. He’s brought in to the fold as ‘Seven,’ but mostly serves as a conduit through which we learn how the others were drafted and how there are advantages to this whole “being dead” thing. The actors do what they can with bland characters who riff on this whole concept of being gone and forgotten. Meanwhile, back and forth and up and down and side to side the narrative goes, one that’s so unfocused it is hard to believe it’s created by the writers of Deadpool and Zombieland.

Structurally, this action thriller is three 40-minute-long action sequences occasionally interrupted by a few moments of respite where the main goals are established with some F**k You’s thrown in to make sure you know this is an R-rated picture. Within those action sequences there are some memorable set pieces, such as the infiltration of a high rise in Hong Kong where the gang must capture the aforementioned dictator’s younger, nicer brother Murat (Payman Maadi). The granddaddy of them all, however, is the billion-dollar yacht that gets turned into “the world’s biggest magnet” and serves up a number of creative, intensely violent kills.

6 Underground is a gorgeous looking movie. That’s straight-up fact. Bay blitzes you with scenery featuring grand architecture sparkling in the blood orange sunsets. There are some pretty inventive camera angles that throw the chaos in your face as if you yourself are about to get bisected by some random object. If you pay attention, you might even see a shot of some camels in their natural element! But in the way Laurent is forced into stripping down for a pointless sex scene between two dead people, 6 Underground and its entire cast suffer from Bay’s fixation on artifice. Bonus points if he can get all these good-looking people splattered in the blood of the soon-to-be-not-living.

It’s a still frame, but you can still detect the slow-mo

Recommendation: Queue it up on Netflix for you to knock out on Quarantine Day #309. Don’t be a Tom. Don’t be in a such a hurry to watch Michael Bay indulge in all his worst excesses. 6 Underground is a total mess, a bad movie even by his standards.

Quoted: “They say that your soul departs when you pass. Well, for us, it was the opposite. The moment nothing to lose became something to gain. And the whole wide world seemed a little less haunted.”