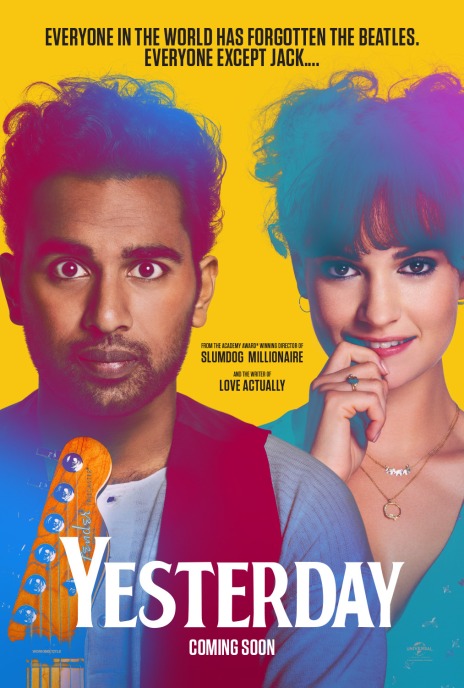 Imagine all the people living day to day without the music of the Beatles. Imagine John Lennon aging into his 70s, living a quiet life with an un-famous instead of infamous significant other. And imagine being Jack Malik (Himesh Patel), the only one in the world who still has a recollection of the band and their indelible influence. These are the things the very silly but undeniably charming romantic comedy Yesterday imagines and then makes real.

Jack is in a bit of a pickle. Well, first he’s in a hospital bed and missing some teeth after getting struck by a bus when a global blackout hits out of nowhere. Up to this point his pursuit of his musical passions has not been going well. He struggles to get gigs and when he does he plays to dwindling crowds, some of them so small his mates and his so-obviously-more-than-friend/manager Ellie (Lily James) are the crowd. When he plays a classic Beatles tune for them one afternoon and they’re none the wiser, Jack sees an opportunity. The blackout has seemingly wiped away the collective memory of the band that redefined music not just for a generation but forever. It’s not all bad though because apparently Coca Cola, cigarettes and Harry Potter no longer exist either.

Provided he can remember the lyrics, why not start passing off ‘Eleanor Rigby’ as his own? We don’t have to go crazy here and exhume ‘Yellow Submarine’ or anything like that but, really, who is he harming if he claims authorship of some of the most popular songs ever written? So he does, and with Ellie’s hand gently on his back, guiding him in the direction of his dreams yet unwilling to abandon her post as a schoolteacher, he embarks on the path to superstardom. He brings along his very socially awkward friend Rocky (Joel Fry) as his roadie.

Along the way Jack meets British singer/songwriter Ed Sheeran, for whom he opens at a big show in Moscow and later gets into a songwriting “battle” where the two are challenged to come up with a new song on-the-spot. I’ll let you guess as to how that works out. Jack’s situation becomes more complicated when he is introduced to American talent manager Debra Hammer (a deliciously nasty Kate McKinnon), who convinces him to dump bonny old England for the sunny coastlines of L.A.. Once there he faces increasing pressure to not only put together a collection of smash hits which will form “the greatest album of all time” but to overhaul his image into something that screams Success.

Yesterday is a fluffy bit of entertainment surprisingly directed by Danny Boyle. I say surprisingly because while it has the vibrant colors, fancy camerawork and busy mise en scène that make his movies so visually energetic and engaging, it is Richard “Love Actually” Curtis’s writing that ends up characterizing this movie. The fantastical premise is as littered with plot holes and contrivances as much as the soundtrack is with Beatles classics (the usage of which reportedly took up about 40% of the overall budget!). Yesterday is Boyle’s fourteenth directorial effort and it just may be his most formulaic.

Despite the flaws, none bigger than the fact the story never really delves below the surface of its complicated morality, it is hard to hate on a movie that is so amiable and so full of heart. That largely comes down to the efforts of the cast who make for great company at each and every step of the way. British-born actor Himesh Patel proves to be an impressive singer, and his genuine chemistry with Lily James had me smitten from pretty much minute one.

Recommendation: A bonafide cheesy, feel-good movie. I’m trying to decide if you’ll get more out of this thing if you’re a Beatles fan or a sucker for a good romantic comedy. As far as the music goes, Yesterday feels like a “Classic Hits” soundtrack. 2020 has been a rough year to say the least so far. Maybe “hunkering down” with a movie as familiar and ordinary as this is just what the doctor ordered.

Quoted: “Miracles happen all the time!”