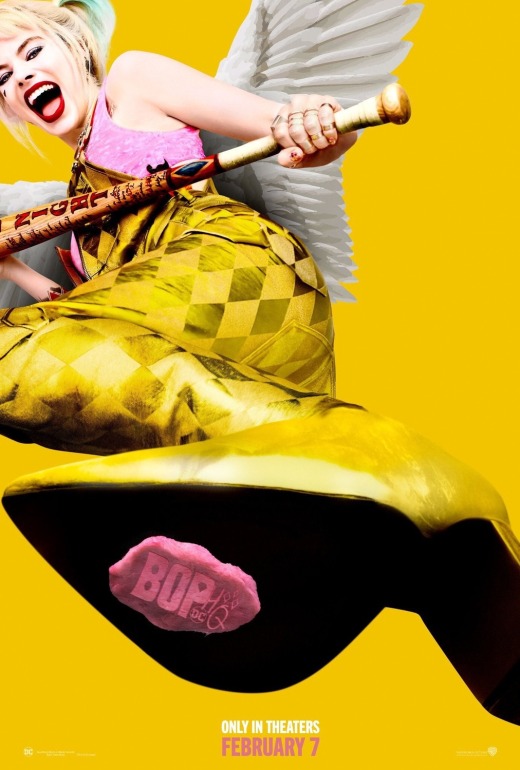 Above all else Birds of Prey And the Fantabulous Emancipation of One Harley Quinn is an expression of personality. It’s loud and ridiculous in almost every way, but it’s also really fun and that’s just enough for me to declare DC is off to a good start in the new decade.

Unlike several entries in DCEU’s troubled past the Harley Quinn standalone movie is an extremely colorful adventure. You might have heard it being described as the female Deadpool, and as far as style points are concerned that’s an accurate comparison (think lots of fourth-wall breaks, tape-rewinds and fruity language). Plot-wise I’d say this bears more resemblance to John Wick: Chapter 3. Oddly enough the two movies actually do share stunt coordinator Chad Stahelski in common, who was called upon to punch up Birds of Prey‘s action bits.

A lively animated opening title sequence brings us up to speed on what’s going on in the world of Harley Quinn. When The Joker finally calls it quits on their relationship Harley (a.k.a. Harleen Quinzel, a.a.k.a. Margot Robbie) does what any normal person does and throws a pity party — an epic one. One that involves a radical haircut (sort of), adopting a pet hyena and driving an 18-wheeler into the Acme chemical plant, where she and Joker made their special little pact to be together 4eva. For her this is much-needed closure, until she realizes this has actually opened up new problems. See the thing is, all the years she’s been with Mr. J she’s basically been given carte blanche to do whatever to whomever. Now she’s “updated her status” in a very public way and soon Gotham’s finest scumbags are lining up to give the formerly untouchable Cupid of Crime her comeuppance.

At the top of the list of Harley haters is the obnoxious crime boss Roman Sionis, played by Ewan McGregor in the hammiest performance of his career. It’s pretty OTT but apparently effective because I sure ended up hating this evil carnival barker-looking mofo. And Chris Messina as well, who plays Victor Zsasz, Sionis’ right-hand man and possibly more besides, with a more realistic creepy menace. Sionis (a.k.a. Black Mask) imagines himself the next best thing to the Joker, ruling Gotham’s underworld with an iron fist and the best mercenary pals ill-gotten money can buy. He’s a misogynistic sleaze with whom the Bad Gurl has racked up an impressive list of grievances — including, but not limited to, having the balls to interrupt him one time mid-sentence. More inconveniently, more recently and more relevant to the plot (such that it is), she’s the one who crippled his driver, prompting Sionis to “promote” his nightclub singer Dinah Lance (Jurnee Smollett-Bell) to the position.

As far as that plot is concerned, Sionis/Black Mask is lusting after some precious diamond, inside which lies an encrypted key to the Bertinelli crime family fortune, who we see meet a grisly end in a brief flashback of some importance. The diamond just so happens to have fallen into the hands of Cassandra Cain (Ella Jay Basco), an orphaned girl and expert pickpocket. In an attempt to literally save face, Harley offers to recover it for Sionis. Knowing how much she likes a good fight the well-connected gangster sends every mutantly muscular mercenary in the metropolis after Cassandra, placing a half-million-dollar bounty on her head (ergo, John Wick 3 but with hair ties).

Though this is clearly the Margot Robbie show, Basco, the young Korean-Filipino actor playing Cassandra, does well to stand out in an ensemble of established talent. Her prickly personality makes for a difficult character to love but crucially her flaws make her human and give her room to grow (whether that’s into Batgirl, we shall see). For now, the way she brings out a softer side in Harley makes her more than a plot device linking the two main arcs. She also fits snugly under the film’s thematic umbrella. While the jaded teen is fighting for her physical freedom, each in this quintet are seeking emancipation of a kind, whether that’s Detective Montoya un-cuffing herself from a sexist work environment, Dinah Lance/Black Canary shaking the shackles of her greasy boss and his goons or Helena Bertinelli, a.k.a. Huntress (a disappointingly under-used Mary Elizabeth Winstead) channeling childhood trauma and a lot of anger into a new identity.

Birds of Prey is director Cathy Yan’s second feature film and her first major Hollywood production. She directs from a screenplay provided by Bumblebee scripter Christina Hodson who adapts characters from the comic originally created by Jordan Gorfinkel and Chuck Dixon in 1996. Together Yan and Hodson build a scrappy team-up movie about a collection of seemingly random individuals reluctantly united against a common enemy. Their story more closely resembles an obstacle course that characters must navigate rather than a focused, concept-driven narrative. While we get enough of a feel for the supporting characters to make the thawing of the ice around these relationships rewarding, it’s Robbie’s passionate portrayal that leaves a lasting impression. Her interactions with everyone else is what makes this movie uniquely entertaining. It’s not high art but I had a great time with it nonetheless.

Quoted: “Do you know what a harlequin is? A harlequin’s role is to serve. It’s nothing without a master. No one gives two bleep-bloopers who we are beyond that.”

All content originally published and the reproduction elsewhere without the expressed  written consent of the blog owner is prohibited.