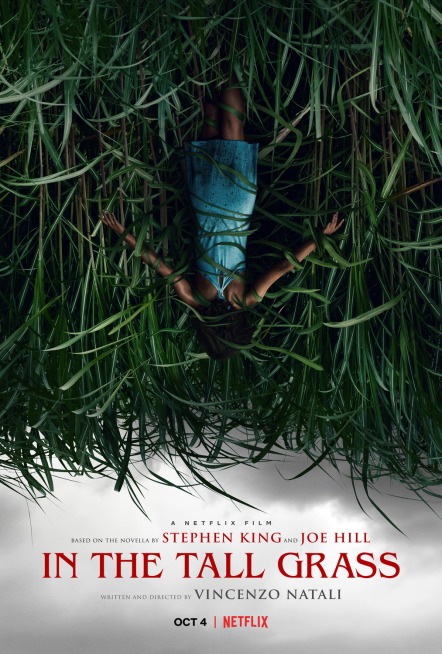 Last year Netflix inadvertently triggered the Bird Box Challenge, which set a new standard for stupidity when it comes to audience interaction/reaction. This year it’s given us another curio ripe for parody in the form of Vincenzo Natali’s In the Tall Grass. A horror film based on a novella cowritten by father-and-son duo Stephen King and Joe Hill, it’s about people wandering into an endless field of grass and, uh, getting something a little worse than lost, their only hope for survival lying in a big chunk of stone planted smack dab in the middle. In the Tall Grass doesn’t quite have the meme potential as Bird Box but it certainly invites mockery in the same way.

There’s a caveat to all this cynicism of course. I have not read the short story upon which the movie is based. Judging by the reviews from those who have, I’m not sure if that’s actually good or bad news. I do know my lack of background changes this review substantially; I can’t decry it as “yet another botched Stephen King adaptation.” Instead I can only review In the Tall Grass for what it is — a slightly above-average Netflix offering whose completely confusing, “let’s make this stuff up as we go along” narrative may or may not be worth your headache.

It’s a Friday, so I’m leaning more towards “is headache worthy.” The premise is nuts, but mostly works if you just go with the flow — and if you bring some of your own grass to the show, too. That can’t possibly hurt. It could make things more confusing, but then this is a maze so whack you can easily get lost in it stone cold sober. The ridiculousness starts with a brother and sister, Becky (Laysla De Oliviera) and Cal (Avery Whitted), pulling off the road in the middle of corn belt USA. They’re en route to the west coast so Becky can find a family to adopt her yet-to-be-born baby. They then hear a cry for help coming from the nearby field, where grass grows high enough to conceal Shaquille O’Neal. A boy named Tobin (Will Buie Jr.) claims he has been stuck in there for some time. Another voice begs them not to come in.

Throwing caution to the wind the pair enter anyway and quickly find that some funny business is going on. Getting separated is not just easy, it seems inevitable and disorientation is taken to a whole other level. I suppose here’s as good a place as any to praise the film for its technical prowess. In the Tall Grass is surprisingly stylish, cinematographer Craig Wrobleski providing a number of effective and dizzying camera angles that make the fields look both beautiful and menacing. Sound designer David Rose is indispensable in providing ambience, the rustling of the blades in the breeze at once soothing and ominous — combined with an eerie score by Mark Korven it really creates an unsettling atmosphere out of very simple elements.

The field is apparently playing for keeps with other lost souls, including a man named Ross (Patrick Wilson) who is the boy’s father. Some time ago he and his wife Natalie (Rachel Wilson) became separated while chasing down their son. He now stumbles across an increasingly panicking Becky, whose pregnancy is causing a great deal of discomfort on its own. Ross attempts to calm her, extolling the virtues of parenthood and then telling her he believes he’s found a way out of this seemingly never-ending maze. Meanwhile an equally disconcerted Cal encounters Tobin, who imparts wisdom in a creepily omniscient manner while burying a dead crow: “The grass doesn’t move dead things.”

In what appears to be the next day, none other than the dude who ran out on Becky arrives at the same field. Guilt has landed Travis (Harrison Gilbertson) here — either that or stalker tendencies, I’m still not sure which. This is where the story gets really gooey, plummeting us into a labyrinth of strange time paradoxes, an ever more hostile environment in which the grass takes on a decidedly more villainous role, where the significance of the rock takes on supernatural overtones. Where people who were literally moments ago discovered as rotting corpses are now alive and well. Where Patrick Wilson transforms from a real estate agent with a fondness for CCR to a David Koresh type with an infatuation with a stone monolith.

It isn’t an exceptionally large cast and the whole game is really just about survival. Yet Natali’s approach does not go as the crow flies. There are so many detours within the brush it can be challenging to keep up with everyone and who’s looking after whom, where loyalties truly lie. It doesn’t help that when things take a turn for the truly nightmarish the literal darkness conceals and consumes identities, obscuring friend from foe and human from, uh, grass people. In the Tall Grass is ultimately that film where the less you think the more you gain. Questions arise at every ill-advised zig and zag, and if you feel so inclined to take notes on the film’s internal logic as events unfold perhaps all of those will be answered by the film’s abrupt conclusion. Sometimes it’s best to not fight against yourself or the fait accompli the movie presents. For the most part the descent into madness is rendered with enough creativity and provocative imagery to make you think twice about entering a corn maze this Halloween.

We’re all losing our heads out here!

Recommendation: I’ve got to think this movie goes down as a bitter pill for those coming in with expectations set by the short story. For me, I’m a big Patrick Wilson fan so that definitely elevated the experience. The acting around him isn’t quite as convincing, but it’s enough to hook you in. The premise in itself is a good hook. But then there are elements like “grass people” that kind of make this movie just as easy (and fun) to mock as it is to embrace as a chilling tale of survivalism.

Quoted: “Here in the garden of forking paths, you didn’t make any one choice. You made every choice. And they all led back to me.”

6 thoughts on “In the Tall Grass”