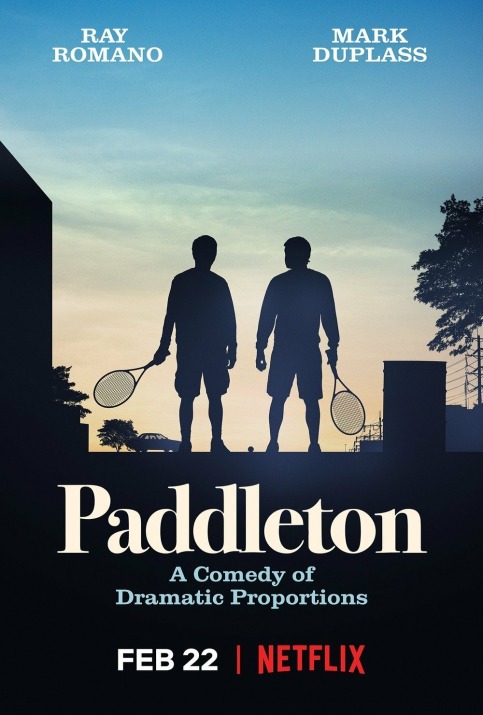 It’s not often that the Duplass brothers make a heavy movie. Darting in and out of the so-called mumblecore scene and playing with time in pleasantly nostalgic trips down memory lane (Blue Jay) or lurching ahead into the future with spirited abandon and childlike naivety (Safety Not Guaranteed), they typically go for heartache rather than rip-your-heart-out. But the timeline we’re dealing with in Paddleton makes it absolutely the bitterest of sweet efforts from the guys who got away with making navel-gazers about a guy living at home and a puffy chair.

Yeah Paddleton is another slice-of-life drama (supposedly the first in another four-picture deal Duplass Brothers Productions have secured with the streaming behemoth Netflix), but then it’s also a story dealing with cancer and mortality so it’s really more like the whole damn cake we’re tucking into here — life, death and . . . haunting your friend in the afterlife, maybe? This is a more serious movie, there’s no doubt about that, but if there’s a way to find the humor in something as distressing as one’s own impending death, leave it to the Duplasses to find that way.

In Paddleton Mark Duplass plays a 40-something bachelor named Michael and he’s given a diagnosis that turns out to be terminal. As an actor Duplass is a pretty reliable commodity at this point and so it’s Ray Romano playing his upstairs neighbor Andy who’s the revelation. He might never have been better than he is in this utterly neurotic, quietly devastating role — his second consecutive dramatic persona following a supporting part in Kumail Nanjiani’s The Big Sick (2017). The two eke out a quiet, fringe existence wherein they escape the 9-5 doldrums by watching kung fu movies, eating pizza and engaging in this strange but totally fun-looking game they’ve invented called ‘paddleton’ — a hybrid of tennis, squash and basketball played off the back of a dilapidated building.

It doesn’t look exciting or rewarding but they slip into this routine like one pulls on their favorite torn Levis. There’s a comfort and security in simplicity, a notion that’s only reinforced — and with surprising profundity, too — once we’ve arrived at the crux of the movie, when Michael decides to end his life on his own terms rather than wait for the disease to land him in the hospital, hooked up to machines. Michael’s choice sets up a philosophical conundrum that Andy of course wrestles with, urging his friend to fight back. Michael doubles down, insisting this is a quality-over-quantity situation. He’d much prefer to spend his remaining time doing just what they’ve always done: pizza, kung fu, paddleton. Not necessarily in that order. Indeed there’s comfort in having a routine. No bucket-list stress, no grand speeches (well, there might be a good half-time speech delivered by Andy at some point). No plastic feelings, please.

Director Alex Lehmann previously worked with Duplass alongside Sarah Paulson in 2016’s Blue Jay. The collaboration resulted in two outstanding performances and that’s been duplicated here. Romano and Duplass make for an endearing bromance that shoves the likes of Seth Rogen/Jonah Hill/James Franco and Will Ferrell/John C. Reilly to the way back seat. Paddleton is an amiable drama that toots along at about two miles an hour, features about five actors total, and physically goes almost nowhere — the narrative briefly kinks out into a brief road trip “comedy” of sorts when the pair have to procure some controversial medicine — and yet it manages to hit some profound depths along the way.

What starts out as an air of melancholy progresses to a rather stunning, emotional climax, a responsibly handled if challenging to watch dramatization of those last, ultra-heady stages of the grieving/dying process. Acceptance is a toughie, mostly because of the stepping stones you have to cross to get that peace of mind. A moment of paralyzing fear becomes the Duplass’ signature capital-A awkward scene. Yet for all the excruciating detail, Paddleton is ultimately life-affirming. These two dudes care for each other deeply. Despite being tinged with some ugliness the movie is beautiful because it makes this relationship the focus.

Recommendation: Two note-perfect performances elevate Paddleton above the potentially overly-sentimental, sugar-coated drama it might have otherwise been. Heartbreaking and heartwarming in equal measure, Paddleton is probably the most challenging Duplass Brothers movie currently on offer but along with the pain comes plenty of reward. A high recommendation for fans of Mark, Jay and whatever other Duplass may be lurking out there. Oh, and Ray Romano too.

Well unfortunately I never did manage to come up with some kind of “celebration” post for my blog’s eighth birthday — that opportunity came and went without so much as a kazoo being tooted. Actually — that can still happen. In fact, here’s literally an entire kazoo band to make up for that:

Now, without further kazoodling, here’s what went down on Thomas J during the month of July.

Apollo 11 · March 1, 2019 · Directed by Todd Douglas Miller · A truly mesmerizing experience that’s more visual poetry than pure documentary, Apollo 11‘s “direct cinema” approach gives viewers a unique behind-the-scenes look at how the Americans successfully put men on the Moon half a century ago. Relying entirely on its breathtaking, digitally restored archived footage — some of which has never been released to the public until now — and audio recordings to deliver both information and emotion, Apollo 11 isn’t just a celebration of one of man’s greatest achievements, it’s an unbelievably effective time capsule that rockets us back to the 60s as much as it propels us into the star-strewn night sky. This is hands down one of the most insightful, hair-raising looks at any Apollo mission that I have come across. And it only goes to reaffirm Damien Chazelle’s First Man as perhaps one of the most accurate renderings we will ever get in a dramatization. (5/5)

The Red Sea Diving Resort · July 31, 2019 · Gideon Raff · Inspired by the real-life rescue mission, code-name Operation Brothers, in which a group of Mossad agents helped smuggle tens of thousands of Ethiopian-Jewish refugees out of Sudan and back to Israel in the 1980s, using a dilapidated tourist outpost as a cover. The story it tells is absolutely inspiring, but unfortunately the execution and the performances make it all seem like a vacation. A game cast turns up but is monumentally wasted, none more than Michael Kenneth Williams who disappears for nearly half the movie. Gideon Raff plays it fast and loose with the tone, creating a Baywatch-meets-Blood Diamond-meets-Ocean’s Eleven that makes for an oft unseemly watch. Even worse, it’s pretty boring. (1.5/5)

Beer of the Month

A dangerously drinkable, unfiltered IPA from Stone. Their Fourth of July release is, I think, only the second time I’ve managed to secure one of their limited-release ‘Enjoy By’ drinks. Better late than never, because this one, at 9.4% ABV, is a Stone cold classic!

If you could only see one, which would it be — The Irishman or Ad Astra?