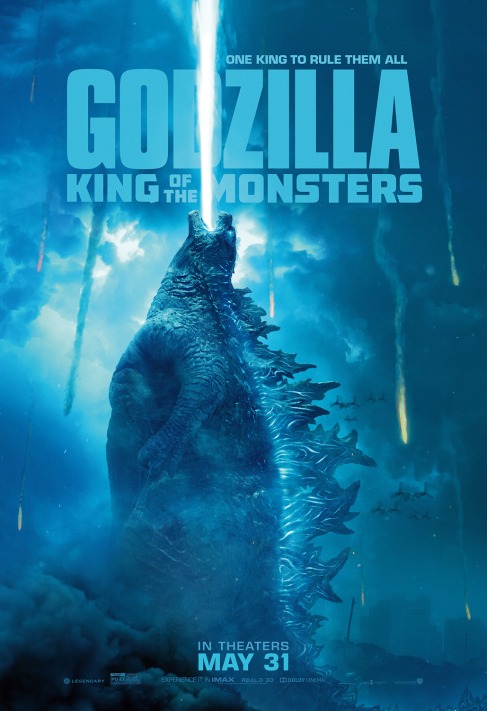 The sequel to Gareth Edwards’ Godzilla (2014) is undeniably a different beast, dispensing with its predecessor’s drip-fed action and methodical pacing for more direct, adrenaline-spiking payoff. Edwards had his chance to thrill us and apparently he botched it so in steps Michael Dougherty, the dude who gave us the anti-Santa horror-comedy Krampus. He offers himself up to fans as a most humbled servant, giving the world’s most famous kaiju a few new friends to hang out with, effectively creating a much bigger spectacle that puts primal, brutal showdowns front-and-center.

King of the Monsters may not make any move bolder than killing off its presumed main characters within the first fifteen minutes, but that’s not to say it doesn’t have big things in store. Over the course of an indulgent two-and-a-half hours Dougherty sends us on a visually spectacular journey from the plush greens of the Yunnan rainforest to the blinding white of the Antarctic Circle, establishing the monstrous battles for supremacy against a backdrop of environmental apocalypse and human hubris — precisely the kind of thematic posturing you’d expect from a movie about a creature born of the nuclear age.

From an action standpoint King of the Monsters absolutely lives up to its title, presenting a series of city-leveling confrontations as an epic territorial dispute wherein we lowly humans are caught on both sides of an ideological divide: Do we attempt to force our hand or do we let Mother Nature run her course? The film features several of the classic Toho creations and captures them using all the bells and whistles of breathtaking modern CGI. Behold the luminescent beauty and grace of Mothra as she unfurls her wings; the screaming intensity of the volcanic-born predator Rodan; the sickening size and freaky three-headedness of “Monster Zero” (King Ghidorah, if you prefer) — the latter serving as the film’s primary villain and fulfilling his classic role as arch-nemesis of Godzilla.

King of the Monsters inherits its predecessor’s human problem but that component of the story is slightly more involving this time around, even if the characterization is again pretty generic. But let’s be reasonable here, it’s nothing if not par the summer blockbuster course and it’s certainly not pre-2000 Godzilla, where Roland Emmerich had us all on pins and needles wondering whether anyone would actually pronounce Matthew Broderick’s character’s name correctly. An ecoterrorist named Alan Jonah (Charles Dance) despairs at the overpopulation crisis and humanity’s wanton disregard for their environment and so endeavors to return the planet to a “more natural” state. On a collision course with his special brand of crazy are the Russells, a science-minded family who have helped the secretive government agency Monarch develop technology used to measure the activity of the many known “titans” across the globe, technology Mr. Jonah seeks for his own nefarious agenda.

Stranger Things‘ Millie Bobby Brown may only be 15 years old but in her big-screen début she stands out among her more experienced co-stars, particularly a tired-looking Kyle Chandler and an uncharacteristically unconvincing Vera Farmiga who play her parents now separated after the loss of their younger child. At least their anti-kaiju stance advances the modern narrative in a way that’s believable. They are remnants of a world that didn’t quite know how to negotiate a 390-foot-tall, upright-walking reptile who also spits nuclear radiation. A world that didn’t really understand what his relationship was to us, what his purpose was.

Brown’s Madison convincingly bridges those eras. She doesn’t share her parents’ hatred for the big guy. Her compassion proves an evolution of understanding. With her mother held hostage physically and ideologically by Mr. Jonah she emerges as one of the few voices of reason in a world gone mad. Well it’s her and Ken Watanabe, who reprises his role as Monarch scientist Dr. Ishiro Serizawa. As one of the elite few Japanese actors who got to take part in these big American event films, it’s about damn time he gets more of a say in these matters, his arc not only emotionally resonant but vital to the story.

King of the Monsters is an old-school-feeling, globe smashing adventure that prioritizes big time fun over mood and pathos — kinda the opposite of Godzilla of five years ago. Not that that movie wasn’t entertaining, of course. I miss the discipline Edwards showed in building up to that incredible, vertical-panning shot that gave us our first good look at the main star. I miss that raw power of adrenaline. The sequel, however, offers its own excitement. The action is revved up to more crowd-pleasing levels, while the sheer amount of effort poured into the creature design and indeed the fights justifies the price of admission, whether that’s the sound engineers edging Godzilla’s roar closer to the original 1954 sound, or Dougherty urging his visual effects team, led by Guillaume Rocheron, to really imbue the creatures with their innate animal-like behaviors and physical traits — Ghidorah memorable for not just having three heads but those heads each moving independently like cobras waiting to strike.

King Ghidorah, and indeed King of the Monsters overall, makes a fairly strong case for bigger (and more) being better. It left me eagerly awaiting what comes next and in my opinion that’s what a good movie, a good second chapter, should do.

“Count your blessings. Your lines are better than mine.”

Recommendation: If you haven’t seen this movie yet, don’t be a nunce like me and miss the end credits! (Is this movie still even playing theatrically?)

8 thoughts on “Godzilla: King of the Monsters”