To those people still reading or starting to read me:

This month, as in July, I’m being told by the folks behind the scenes that it’s my eighth year of “flying with WordPress” which is a pretty amazing thing. I’m not sure whether I’ll be doing anything in observance of that landmark — in the past I couldn’t help but wax lyrical about that specific day, but at eight years old this blog just isn’t quite as spry as it once was. It can’t party like it used to. Things might get as crazy as a possible new Top That! post about eight favorite movies this year or eight moments when Johnny Depp looked most like Johnny Desperate. I don’t know. Something along those lines.

The month that’s now somehow over marks the halfway point in the movie year, which is kind of crazy too. It’s as good a time as any to take stock of the year of blogging that’s been.

Twenty-eight total posts (not counting monthly wrap-arounds) doesn’t exactly set the world on fire (not when considering back around 2013-’14 I was putting up about that many in a month!) but this more relaxed pace has been nice. With my local theater still being closed (so long, summer profits!) and the closest one being more than 30 minutes away there’s more than the usual amount of deliberating about going out these days. Plus, a number of my fellow trusted bloggers have really been making a strong case for staying home and catching up with some streaming stuff.

And that’s just what I did on Thomas J for the month of June. Let’s get into it, shall we?

Alternative Content: Top That: Seven Most Dramatic Scenes from the 2019 NBA Finals 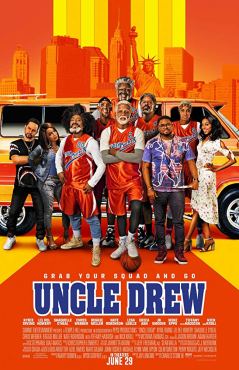 Uncle Drew · June 29, 2018 · Directed by Charles Stone III · I enjoyed this movie apparently enough to deem it necessary to weigh in, because it was so totally unforgettable right? If you do recall, the movie basically amounts to Kyrie Irving and a bunch of other famous basketball players, both current (Orlando Magic’s Aaron Gordon) and retired (Los Angeles Lakers’ Shaquille O’Neal), dressing up as old geezers who come together to form a squad at the behest of a desperate inner-city basketball coach (Lil Rel Howery — one of the movie’s few actual actors). He needs to field a team worthy of taking down that of his arch-nemesis, Mookie (a bling-ed out Nick Kroll) in the upcoming Rucker Classic, a tournament that takes place in Brooklyn every year. If he wins the big cash purse, he may just win back the love of his ex (Tiffany Haddish) — or at least earn back the right to keep paying rent. What ensues is nothing short of the types of shenanigans you would expect from a movie that casts the “big fella” (his actual name in the movie) Shaquille O’Neal as the least-convincing karate instructor in history and Nate Robinson as a dude who’s both confined to a wheelchair and can dunk the ball like Vince Carter in his prime. A movie that is just littered in NBA-approved product placement stuck on every flat surface in the frikkin’ frame. But hey, I can’t go too hard on this road-trip comedy because while there’s not as much actual balling to be found, there was a lot more heart than I was expecting. For this basketball fan, the combination of some well-chosen NBA personalities and the script’s permanent winking at the audience — “hey, look at these seven-foot-tall men in geriatric make-up” — made for a resounding win. (3/5) 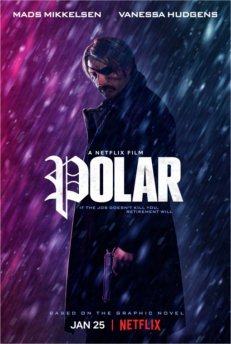 Polar · January 25, 2019 · Directed by Jonas Åkerlund · For the record, I wasn’t peer pressured into this, I watched the notorious Polar (an adaptation of some online graphic novel) on my own, albeit with more than a little morbid curiosity fueling what would turn out to be a terrible, terrible decision. Polar is one of the stupidest, most over-the-top trashy movies I have seen in some time. It’s a masturbatory aid for people with violence fetishes that made me pine for the artistic restraint of Rob Zombie. It’s about an assassin on the run after being marked as a “liability” by the very firm he was once employed by (and led by Matt Lucas’ astonishingly bad big bad). While bunkering down on the outskirts of Seattle or some shit he crosses paths with a troubled teen (Vanessa Hudgens) who happens to be the lone inhabitant of a cabin across the secluded lake. Wouldn’t ya know it, they both come into the crosshairs of Lucas’ roaming henchmen, a gaggle of tattooed idiots who kill fat people badly for pleasure and torture accountants like jackals before ultimately killing them while laughing about it. That’s the kind of movie Polar is. Utterly without class. It doesn’t have to be clean like James Bond but its sole purpose seemingly is to drive up the crassness at every single turn. It’s a one-note movie that’s badly acted, poorly conceived and just ugly all around. Director Jonas Åkerlund introduces himself as an angry infant. (0.5/5) 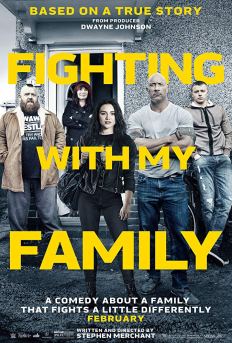 Fighting with My Family · February 22, 2019 · Directed by Stephen Merchant · Stephen Merchant, like many of us, probably wouldn’t last many rounds in the ring but he apparently knows his way around the arena of the uplifting sports biopic. Fighting With My Family is a familiar story about an underdog struggle but the level of conviction in the storytelling helps set it apart. British actress Florence Pugh emerges as a true star in the lead role of Saraya Jade-Bevis (better known by her ring name, Paige), a British female wrestler with aspirations to take her talents and passion beyond the rink-a-dink family business (they’re all wrestling fanatics, too). But it isn’t just her dream to be one of those famous stars she sees on American wrestling programs like the WWE, and that’s what makes Fighting with My Family deliciously (and heartbreakingly) complicated. Merchant handles the divergent paths of Saraya/Paige and her older brother Zak (Jack Lowden) with a harder than expected truth, stopping short of being manipulative or overly sentimental. While Pugh rarely puts a dramatic foot wrong as she goes from a local celebrity in her home town of Norwich to a lost soul bleaching her hair and tanning herself unnaturally in an attempt to fit in to a strange land, the performances all around are very strong and likable. From Nick Frost and Lena Headey chipping in with fun turns as the roughneck but always supportive parents, to a hilariously antagonistic Vince Vaughn as a wrestling promoter/trainer, to Lowden matching Pugh stride for stride as he handles the crushing disappointment, Fighting with My Family may tell the story about an individual’s success but it takes a true team effort to make a movie about it as enjoyable as this. (4/5)

Beer of the Month

What movies are you most looking forward to in July?