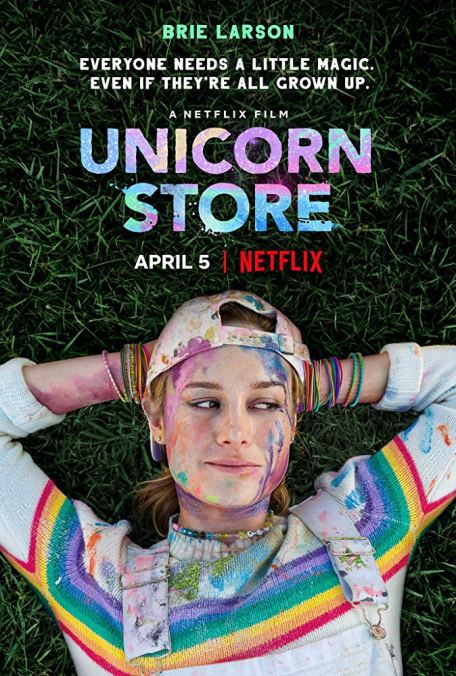 Very much like a unicorn the directorial début of Brie Larson is a colorful curiosity. Unicorn Store reunites her with her Captain Marvel co-star, Samuel L. Jackson, albeit under entirely different circumstances. Instead of trying to prevent intergalactic war here we’re dealing with a millennial figuring out how she’s going to get out of her parents’ house and support herself. And, you know, support the unicorn that she’s about to get — the one she’s dreamed about owning since she was a kid.

Something you need to know about me before we move forward: I may not believe in unicorns but I’m a big believer in Brie Larson. I’ve loved her in most things I’ve seen her in. I also like to think I have a fairly high tolerance for quirky, “precious” indie movies. In 2015 Swiss Army Man rocketed to the top of my favorite movies, while Wes Anderson’s remained among my favorite filmmakers for some time. I’ve stuck by the Duplass brothers at their mumbliest and apparently on a good day I’ll even tolerate a Hipster Baumbach movie.

With all that said, I couldn’t really buy into the intentional absurdity of Unicorn Store. I lay most of the blame at the foot of Samantha MacIntyre, whose words have a touch as soft as a sledgehammer through glass. Hers is one of those overly affected screenplays that tries too hard to convince you it’s as quirky as its competitors (Crystal Fairy and the Magical Cactus is another film that springs to mind, though granted the characters in Unicorn Store are far less obnoxious). Here, just as in Magical Cactus, overt attempts to be different result in performances that feel something less than natural and a viewing experience that’s more grating than is necessary.

Larson pulls double duty as she not only directs but stars as Kit, the emotionally immature protagonist who starts the film failing/dropping out of art school and who for the longest time is convinced the only thing she’s succeeded at in life is disappointing her parents (an okay Bradley Whitford and an (intentionally?) annoying Joan Cusack). They work as camp counselors for troubled youth. Their eternal optimism is constantly offensive to Kit’s sensibilities. After a few nights of being back under her parents’ roof, mixing glasses of Cabernet with several shots of self-loathing, she stumbles into a boring routine at a soul-crushing(ly colorless) temp agency, a 9-5 which revolves around pushing buttons on a copier and having her own pushed by a creepy VP named Gary (Hamish Linklater — no relation to Richard).

While working on a marketing pitch for a vacuum cleaner for her Real World, real priggish bosses, Kit starts receiving mysterious invitations from an equally mysterious Store. Specifically, from a Salesman (Jackson) adamant he can provide Kit what she’s always dreamed of having. It’s in this weird, brightly decorated, strangely tailor-made space — it even has its own ice cream bar! — she learns that unicorns are not only real, they come with owner’s manuals. The presentation’s flamboyant but the details enclosed are written plainly in black and white.

They describe a binding contract that considers everything from the quality of the proposed living quarters, feeding and dietary habits, even the prospective owner’s financial and emotional stability. It’s all very complicated and considered. It’s apparently a responsibility, one that Kit must prove to the eccentric Salesman — and to herself — she’s capable of handling. As she commits gung-ho to her goal, she discovers she’ll need some help in completing one of the first basic requirements: providing adequate living conditions. That’s where hardware store hunk Virgil (Mamoudou Athie) comes in. Although Athie and Larson share a nice chemistry it’s hard not to question the logic behind this “relationship.”

Depending on your penchant for reading deep into things Unicorn Store is likely to leave you either underwhelmed or confused by its less-than-metaphorical denouement. You might just be indifferent to how literally it all plays out. It’s a movie perched on the edge of reality and fantasy, and it definitely has interesting ideas going on. Credit Larson’s reliable acting for the film’s few moments of poignancy. Yet as director, much like she’s written as the lead, she is often too forceful with her hand, too eager to rush seemingly important developments to nab the ending she thinks she’s due.

I shall call you ‘Thanos.’

Recommendation: Unicorn Store‘s an easier one to access if you’re a Brie Larson fan and you have a lot of patience for awkward, relentlessly self-deprecating millennials. If the word ‘Adulting’ doesn’t make you want to throw chairs. Believing in unicorns would be a plus, too. Of course the subject matter isn’t what’s off-putting. The narrative execution makes it hard to invest in the fantastical off-shoots of the real-world, and in this modern Peter Pan fairytale, not being able to believe is kind of a big problem.

Quoted: “The most adult thing you can do is failing in what you really care about.”