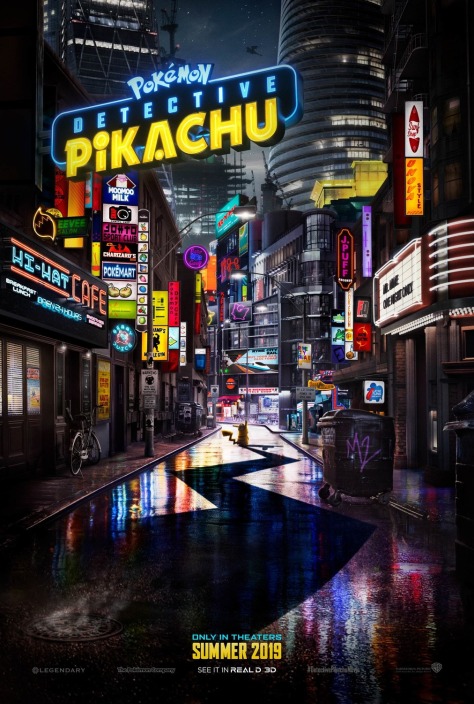 Sure, there’s Pokémon GO! now, but to me the colorful collection of “pocket monsters” will always be a trading card craze, and, weirdly, one of the only defining memories I have of the 18 months I spent in suburban New York. The summer of ’99 disappeared in a frenzied quest to “catch ’em all.” But apparently the 150 original creations courtesy of Satoshi Tajiri weren’t enough for the kids of Wellington Drive. So we began making our own. We got so into it we manufactured an entire world and economy out of paper and crayon, assigning value to scraps of — let’s be honest — glorified confetti. Getting feelings hurt over whose cards were in demand and whose weren’t.

Yes, those were things that really happened. Pokémon brought an entire cul-de-sac together before our own knock-off brand(s) and the over-saturated marketplace that resulted threatened to tear it apart. Memories of the competitiveness of those middle school years came flooding back with Pokémon: Detective Pikachu, the first big-screen adventure for The Pokémon Company, the popular multimedia consortium that began its life in the mid-90s as a pair of Game Boy games — Red & Green in Japan, Red & Blue elsewhere. It’s a nostalgic trip that ensconces the viewer in the imaginative biodiversity of the Pokémon universe. I may have evolved out of the trading card phase long ago but it still somewhat pains me to report that that’s about the only thing this decidedly novice detective movie does expertly.

The movie takes place in a world where Pokémon are by and large captured by humans to be trained for battle in gladiatorial arenas. However some are perfectly content to seek these creatures out for companionship. Detective Pikachu of course isn’t devoid of the former — watch out for an angry Charizard! — but it takes much more interest in the latter, in the relationships between the species, depicting the bond very much like the one formed centuries ago between man and dog. Our main character Tim Goodman (Justice Smith) was one such teenager but his world was shattered when his mother passed away and his father buried himself in detective work in the faraway Ryme City, a utopia where humans and Pokémon peacefully coexist and where battles have been outlawed. Setting aside childish notions of keeping a Pokémon of his very own, Tim turned to the insurance racket and has hardened himself into an Adult. At the ripe age of 21. (This really is a children’s movie, isn’t it?)

But then news of his father allegedly being killed while investigating a case reaches Tim. He travels to the City to collect his father’s belongings, to reminisce, and where he will encounter the amnesiac, caffeine-addicted Pikachu (voiced by Ryan “Deadpool” Reynolds). Tim also briefly crosses paths with his father’s friend and colleague, a Detective Hideo Yoshida (an underused Ken Watanabe) and his gruff-looking but apparently lovable sidekick Snubbull, and around what feels like literally the next corner stumbles into a feisty young reporter looking to make a big break, one Lucy Stevens (Kathryn Newton). Lucy, accompanied by her own Pokémon — a weird-looking, web-footed fella called Psyduck whose whole thing is developing nasty headaches — is suspicious of the circumstances surrounding the detective’s demise, and plans to investigate. Everyone’s got skin in this game, so she’ll get an assist from a perky Pikachu and Tim the Jaded Insurance Sales Rep. Along the way they’ll encounter Pokémon both wild and tamed, some good folk and a few bad eggs (Bill Nighy and Chris Geere team up as a billionaire father-son duo who are as slimy as they are thinly written), and a heinous purple gas that invokes rage and unpredictable behavior in anything and everything it touches. (Hint-hint for the big finale.)

In spirit Detective Pikachu plays out a lot like the Cantina Scene from Star Wars — an observant camera in constant surveillance of the fantastical landscape, encouraging the viewer to interrogate every nook and cranny of the screen for their favorite character(s), popular or obscure. Rob Letterman (Monsters Vs. Aliens; Goosebumps) directs with fan service at the top of the priority list (evidenced by the inclusion of Ikue Ōtani, who does Pikachu’s “pika pika” call) and while it is hard to fault him for taking that approach, the final product proves there is a vast chasm between parading out All Major Characters and giving the audience actual characterization to latch on to. Detective Pikachu is a fun escape but unfortunately the storytelling lacks the same level of imagination and dedication that has gone into bringing these colorful critters to life on the silver screen. In fairness, that’s one big ask. CGI has come such a long way in recent years, and the Pokémon movie, of all things, just may have set the standard going forward.

I spy a silly plot hole.

Recommendation: Since I can’t really frame this review as a condemnation of another failed videogame adaptation since I never played the games, what I can say for sure is that Pokémon: Detective Pikachu is a geektastic trip down memory lane, a movie made by fans, for the fans. Delight in the colorful world-building and the amusing personification of otherwise inanimate objects — see how many obscure characters you can spot. It’s a veritable treasure hunt for followers of Pokémon in whatever form that may be. It’s sadly not the second coming of Sherlock Holmes, though.

Quoted: “Oh, that’s a twist. That is very twisty.”