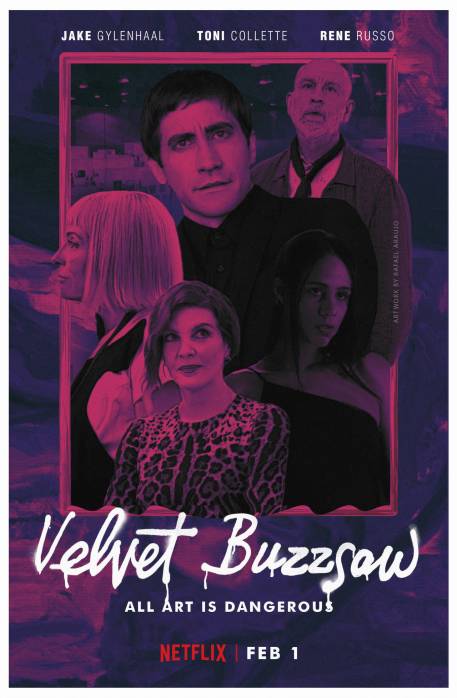 Beauty is in the eye of the soon-to-be-murdered in Velvet Buzzsaw, the new film from writer/director Dan Gilroy, who made his mark back in 2014 with the sensationally gripping Nightcrawler. His third directorial feature following 2017’s collaboration with Denzel Washington on Roman J. Israel, Esq., Velvet Buzzsaw is an apt title for a movie that leans fully into creative madness.

Gilroy’s latest is advertised as a mashup of horror and dark comedy, something that makes it immediately stand out from his previous genre-specific efforts — Nightcrawler a distinctive thriller and Roman J. Israel, Esq. firmly a legal drama. What also makes it stand out is its unapologetic strangeness. As you are no doubt aware by now, Velvet Buzzsaw is the movie where people get killed by artwork. But these are no ordinary schmucks who can’t tell a Renoir from a damn Monet. These are art profiteers who slowly get seduced and then offed by the very works they try to profit from — paintings whose fictional, beyond-tortured artist Vetril Dease seemingly imbued them with a strange and haunting power. As the story progresses, events only become more outlandish — so much so you’re all but compelled to disregard the horror part of the label and embrace the comedy inherent in all the (occasionally bloody) wackiness.

The art of the satire stems from a real-world experience Gilroy had back in the 1990s when he devoted significant time developing a screenplay for a Warner Bros. project called Superman Lives. It was set to star Nicolas Cage as Clark Kent. Try to digest that for a minute. Burp it back up if you need to. Unfortunately for anyone drawn to the image of Nic “Crazy Face” Cage donning the cape and tights they will never get the satisfaction as the studio shut down the project over budgetary concerns. That frustration informs the thematic core of Velvet Buzzsaw, a scathing criticism of the modern L.A. art scene and those who are only in the game because of the money.

The film is set in an alien environment of esoteric taste, haughty opinion and generally unpleasant personality and follows multiple perspectives through a tangled web of relationships, from rivaling art gallery owners — Rene Russo’s icy Rhodora Haze and Tom Sturridge’s creepy, conniving Jon Dondon — to influential outsiders like art critic Morf Vandewalt (Jake Gyllenhaal, reuniting with Russo from Nightcrawler) who has the power to not only sway pricing but as well make or break careers. At the ground floor you get contrast in artistic philosophies in Piers (an unfamiliarly sympathetic John Malkovich), an old-schooler struggling to find inspiration versus Damrish (Daveed Diggs), a hot new street artist reticent to display his work in a gallery. Keep an eye out for rogue players like Gretchen (Toni Collette), an art curator and close friend of Morf’s, who is also itching to make a big career move, as well as the highfalutin Josephina (Zawe Ashton), Rhodora’s frequently under-appreciated assistant, and an art installer named Bryson (Billy Magnussen) with an agenda of his own.

Granted, that is a long list of characters to keep track of. The good news is that we aren’t meant to form an emotional attachment to these creatures. Natalia Dyer’s character, a meek and mild-mannered Haze Gallery intern named Coco, is an exception. As someone rather out of place in this world — she hails from the East Coast and doesn’t seem to have much of an artistic inclination other than balancing multiple Starbucks cups on her daily coffee run — she is best positioned as an audience surrogate. By virtue of how frequently she stumbles upon the gruesome aftermath of paintings come to life, Coco gives us the key to enjoyment here. Go with the flow, absorb the imagery but don’t get too close.

Almost everyone else is disposable, many of them in a literal sense. These are near parodies of people who pontificate over artistic merit for a living. With a couple of exceptions these characters are either completely self-absorbed or cutthroat opportunists, finalists for the old “I can’t wait to see who goes down first” competition. The way they go down certainly makes Velvet Buzzsaw visually pop and feel edgy, while Gilroy’s screenplay, dripping with foreshadowing and cliché-riddled dialogue, tend to align the production with something decidedly more mainstream and predictable.

It’s a frustrating experience because as the film careens towards the absurd it delivers on its promise of comeuppance and in so doing entertains in a strange, almost perverse way. At the same time Gilroy gets so loosey-goosey with his direction the critique itself threatens to lose all meaning. The domino effect of bodies dropping ends up feeling like a gimmick after so many instances, yet undeniably the art of the kill is something to behold. And if this nobody blogger is taking note of some sloppiness, I can only imagine what Morf would do. 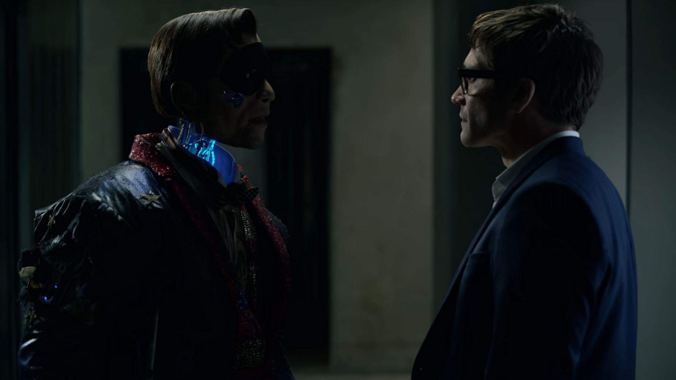 Recommendation: How you respond to Velvet Buzzsaw I think really depends on how you interpret the tone. I found it far more funny, albeit darkly satirical, than it was horrifying. Though I did find a few elements that were horrific, like the aftermath of The Sphere sequence and Toni Colette’s hairpiece. Either way you look at it, the premise is pretty out there — but that’s something I’d rather have than a formulaic/half-cooked Netflix Original.

Quoted: “These are heinous.”