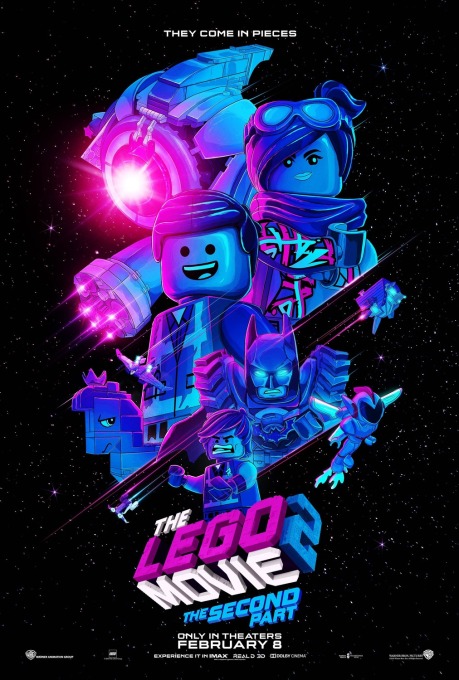 Written by: the Lord Philip; Christopher, a distinguished member of the Miller clan

Directed by: someone of indeterminate skill (Mike Mitchell)

Excuse me. The weather lately, I’m definitely under it — while also being totally over it. It was in the 60s last Friday, mere days after a cold snap introduced single digit temps, and now here we are again dealing with snow’s annoying cousins, hail and sleet. This streak of wild weather might explain the modest crowd that I experienced The Lego Movie 2: The Second Part with on opening night. Or have audiences just moved on? Remember the first one came out five years ago, and while there was more to come it took three years before those obligatory spin-offs came about (The Lego Batman Movie, another hit, and The Lego Ninjago Movie, not so much — both released in 2017). Is Lego Movie fatigue a real thing? Are we spoilt for choice? Whatever the reason, the release of Lego 2 feels much less of an event, the kind of Big Deal I would have anticipated given the success of that first film.

The classic crew return in Mike Mitchell’s space opera adventure, with Chris Pratt earnest and naive as ever as hero Emmet Brickowski, Elizabeth Banks more dark and brooding as Wyldstyle/Lucy, Will Arnett even more baritone-voiced as “The Man of Bats,” Alison Brie reliably Unikitty, Charlie Day as Spaceman Benny and Nick Offerman full-metal-bearded as the . . . pirate . . . guy. Away from them we are introduced to a handful of new personalities, some of them as memorable as any of the preexisting ones. And while the specifics of the plot are entirely different the basic shape of the story is retained, the animated characters and action foregrounded against a live-action environment where those plot developments emulate what is happening in a child’s imagination. No, the set-up isn’t as fresh a second time around but I still find it to be one of the great strengths of this franchise, and even as Lego 2 returns to the surface more often it does it to great effect.

After standing up to the all-powerful Lord Business/The Man Upstairs (Will Ferrell) in the first movie, Emmet feels quite optimistic about the future, despite present-day Bricksburg (now called Apocalypseburg) looking like a Mad Max/Blade Runner wasteland where everything is far from awesome. An inter-racial war between Legos and Duplos have ravaged the land and turned the good Bricksburgians into hardened plastic cynics. Yet amidst this abyss of humanity Emmet has gone ahead and built a little house for him and Lucy to carry out their lives in, and it has everything, including a double-decker porch swing and a Toaster Room.

When General Mayhem (Stephanie Beatriz), the leader of the Duplo invaders and hench-woman of the “not evil” Queen Watevra Wa’Nabi (Tiffany Haddish), pays a visit to the people of Bricksburg, now confined to a fall-out shelter á la Star Wars: The Last Jedi, she abducts Lucy and a few other unfortunates, coercing them to take part in a wedding ceremony in the far-away Systar System. Emmet, with little support from his peers — not even Lucy, who is yearning for a more mature, less naive Emmet given the times in which they live — determines it is his duty to save them. Along the way he meets a badass named Rex Dangervest (also voiced by Chris Pratt), who will help Emmett not only become “more badass” but as well prevent the impending plastic nuptials that will bring about “Our-Mom-Ageddon.”

Plot and themes suffice, but that’s really all they do. They fail to wow. We deal with familiar notions of dealing with change and staying true to one’s identity in the face of societal/peer pressure. What is new, however, is the deconstruction of action hero tropes. Is being “The Badass” all that it’s cracked up to be? Emmet, ever the underdog, is challenged both by his past actions and his present conflict. It is suggested he took a disproportionate amount of credit as “The Special,” when Lucy did as much if not more of the ass-kicking. In the present the essence of who he is becomes tested — can he become this more serious, more assertive, less frequently pushed-over Lego piece Lucy wants him to be? What happens when he succeeds at that?

The answers to those questions and a few more may well lie in the egotistic Rex Dangervest, a fun new character who showcases everything that is inherently silly about icons of machismo like Harrison Ford and Bruce Willis. In fact his very existence is a parody of Chris Pratt’s own career, whether taking aim at that stupid thing he did with the raptors in Jurassic World or poking fun of his potential casting as Indiana Jones — all of which being material more geared towards the adult chaperones in attendance.  It seems unlikely kids are going to get many of those references, never mind comprehend the time traveling twist that is rather convoluted to say the least.

Beyond that, Lego 2 makes a conscientious effort to balance the perspective, making the female characters just as integral to the emotional core of the narrative, whether that be on the macro — the real-world drama depicted as a sibling squabble, with Finn (Jadon Sand) not wanting to play nice with his younger sister Bianca (Brooklynn Prince), who’s gotten into Legos herself and wants to do her own thing with them — or the micro level, Queen Watevra Wa’Nabi presenting a shape-shifting femme fatale who turns out to be more than what meets the eye — her “Not Evil” song suggesting she may well be an aspiring Masked Singer contestant. And let us not forget who it is that has inspired Emmet to change.

The release of The Lego Movie back in 2014 was a hugely nostalgic ride for this former Lego enthusiast. I was reminded not just of my obsession with the building blocks but as well the genius of Pixar’s Toy Story. It may not be the most accurate comparison given that the characters technically have less autonomy in the Lego universe. Unlike in Toy Story where the movie happens in the absence of the humans, here the characters are wholly reliant upon human interaction and manipulation — which, incidentally, is what makes Lego 2‘s grand finale so incongruous; I won’t say anything more, but suffice to say it really doesn’t make sense. Still, the very concept of a child’s play things coming to life and given such personality struck me as kind of profound.

Lego 2 clearly aspires to be a Toy Story 2 but unfortunately it is not that movie. In fairness, what sequel is? It takes a similar tact in expanding the canvas, taking the action into outer space, but ultimately it’s unable to escape the shadow of its more successful older brother. That’s most obvious in its attempt to create another ear bug in the form of “The Catchy Song,” a tune that ironically turns out to be nowhere near as catchy as “Everything is Awesome.” It’s a poppy jingle more than an actual song, and its fleetingness tends to sum up the experience as a whole.

“I see a beautiful city and a brilliant people rising from this abyss.”

Recommendation: The Lego Movie 2: The Second Part delivers more of what fans should have expected but it cannot overcome a sense of been-there-done-that. That the law of diminishing returns applies even to the brilliantly quick witted Christopher Miller and Phil Lord (and the guys at Animal Logic who provide the animation) just goes to show how difficult it is to improve upon an already strong foundation. Even if Lego 2 is a step down, it once again will reward older viewers while keeping the little ones busy with the hectic action and bright colors. Despite the flaws it is still worthy of being seen in a theater.

Quoted: “I ain’t Selina Kyle. I ain’t no Vicki Vale. I was never into you even when you were Christian Bale.”

“I’m more of a Keaton guy myself.”

“Oh, I loved him in Beetlejuice!”

8 thoughts on “The Lego Movie 2: The Second Part”