It has been some time since I went overboard and put together one of these long-winded end-of-year summaries; I think the last time I did anything like this was when I last “hosted” my own little version of the Academy Awards presentation — circa 2016, I think? Long-time readers remember this annual feature as The DigiBread Awards — this was back in the day when the site was Digital Shortbread, a name that I changed in January of 2017, mostly out of a feeling that too many people thought I was trying to start a bakery or confectionery or something.

I would like to take this time to thank my incredible (and patient) readers for staying aboard this choo-choo train, slowly but surely chugging along. This year has been the least active year I have had since beginning the site seven years ago, yet here we are — at the precipice of another. Proud of being able to see things through when the going got tough. And though it saddens me to see so many familiar faces disappearing, that is how life works. There is a thing called change, and while I am not quite ready to move on yet from this, I understand why others have. Blogging is a really time-consuming activity that can easily become a grind.

Now that we have all of the mush out of the way, here is a month-by-month breakdown of what went down on Thomas J in 2018. But so as to not completely overwhelm, I am breaking this . . . break-down into two parts. This post includes reviews posted from January until June. Part 2 will feature reviews done July through December.

Oh yeah, that’s right! I took January off. Writer’s block reared its ugly head early, despite a few pickings that looked quite good (Molly’s Game, the directorial début of the master of walk-and-talk-scenes Aaron Sorkin; the profusely praised Call Me By Your Name expanded wide; also Mom and Dad, a whacko-sounding genre film featuring Nic Cage and Selma Blair as parents who “maniacally turn on their children while in the grip of a mysterious 24-hour frenzy;” and The Insult racked up impressive critical ratings but I never had a chance to seek it out).

And now Thomas J shows some signs of life. Two new reviews. A few Oscar predictions. (You can check those out as part of my monthly round-up right here.) 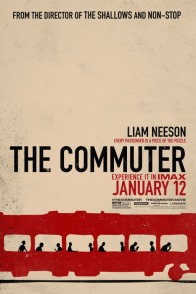 The Commuter: a decent post-Taken Liam Neeson thriller that offered the same kinds of thrills fans have come to expect from the actor-director (Jaume Collett-Serra) tandem, albeit on a more mellow level. You may not get any memorably threatening lines delivered over the phone here, but there is a pretty cool song by Cosima (“Unnamed”) that pops up in a passenger’s headphones/as part of the soundtrack. So that was cool.

The Cloverfield Paradox: Man, this thing really wasn’t very good. But you know what? I am just as not-very-good at going back to give things a second chance. I ripped this supposed franchise-expanding chapter a new black hole, but I probably went too hard on it. No, I didn’t? Well that’s good to know. Now I don’t have to go back!

On the positive side, March was the month that delivered Annihilation*. I was fortunate to catch Alex Garland’s follow-up to his exciting début (the high-concept sci fi trip from 2014, Ex Machina) in theaters. So I thank March for that. Unfortunately, March also saw the passing of iconic physicist Stephen Hawking. I was actually quite saddened by that loss, so I wrote a tribute to him. 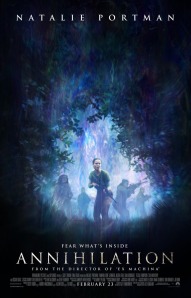 Annihilation: from my review — “The best of Annihilation plays upon the deepest recesses of the mind, opening the floodgates for extrapolation and interpretation.” Further, I add (in a typically sensationalist way) that “Annihilation is the reason why I love not only going to the movies, but writing about my experiences with them as well. I felt transformed by this.”

Unsane: A heady, twisty-turvy psychological thriller that benefits from star Claire Foy’s strong turn. This was my introduction to the British actress, playing a young woman fearing for her safety after her stalker appears to have tracked her down at a mental institution. Given that director Steven Soderbergh decided to shoot the film on an iPhone, I’m sure more people will remember how the film was made rather than what it was about. And while the grainy quality of the picture at times was indeed a distraction, I was pretty impressed with the amount of tension that was wrung out of the narrative.

One and Not Done: With the 2017-’18 college basketball season coming to a close, I thought it would be appropriate to talk about this 30 for 30 film, which explores the career of collegiate basketball coach and gadfly John Calipari. If you consider yourself a college basketball fan, this is mandatory viewing.

A Quiet Place: narratively taut, effectively tense and occasionally terrifying and featuring an innately likable family doing their best to survive in a post-apocalyptic world overrun by creatures that hunt by sound, A Quiet Place announced John Krasinski as a stud of a first-time horror director. Though I really need to stop using that phraseology. The guy has made movies before, but this one really hit in a big way with critics and audiences alike. Good for him, he deserved it.

Isle of Dogs: who can resist a Wes Anderson movie — one rendered in stop-motion and about man’s best friend, no less? I adored Isle of Dogs. It was exactly what I expected — even if there is a bit more of that ” . . .as well as for worse” starting to subtly creep in. Anderson is an incredibly visually inventive storyteller, but comedy-wise he is rather predictable. (I say that now; he could prove me wrong by making something entirely different in his next film. Somehow I doubt it, and I will welcome it all the same. Charming is Wes Anderson’s middle name.)

Another mini blogging vacation. This was a planned break. I barely saw any movies this month***, however I did manage to see Tully, a sweet but hardly sentimental drama about a single mom trying to make ends meet. While it featured a great Charlize Theron as Marlo, alongside an equally fascinating Mackenzie Davis as the title character — a night nanny named Tully — the film, written by Diablo Cody, concluded in such a bizarre way that I thought took a lot away from the authenticity that made the rest of the film so engrossing.)

Found me playing a little catch-up. 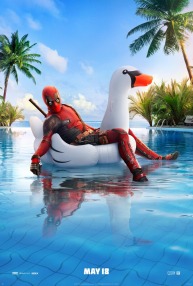 Deadpool 2: did you see Deadpool 1? There you go. (At least I was able to prevent Ryan Reynolds from dominating my review this time.)

Solo: A Star Wars Story: not everyone wanted a Solo spinoff. But we got one, oh boy did we ever get one! Alden Ehrenreich bravely stepped into the cynical shoes of Harrison Ford’s bad-boy space cargo pilot, and while it wasn’t the performance of the decade — I realize no one’s hanging posters of Ehrenreich on their bedroom walls — he surprised me with his confidence. This movie was really a lot of fun and you’re just a party-pooper if you resisted the Force on principle. Come on! Like this thing as much as me!!!!!

Tag: a fairly inconsequential movie but far from a waste of time, this based-on-a-true-story action/comedy finds a group of adult friends wildly devoted to perpetuating their favorite childhood game. From my review — “A bromantic occasion in the vein of The Hangover, yet somehow even less “culturally, aesthetically and/or historically significant,” this is the kind of entertainment that goes down GREAT with buttered popcorn (or even unbuttered . . . if you’re weird).”

* correction, March was actually when i published my reaction. The film came out February 23, and given its really limited run in theaters, it is highly unlikely I actually waited until March to see it.

** ACTUALLY TITLED TRUTH OR DARE, BUT SERIOUSLY . . . WHO CARES?

*** FORGOT ABOUT INFINITY WAR, OF COURSE.