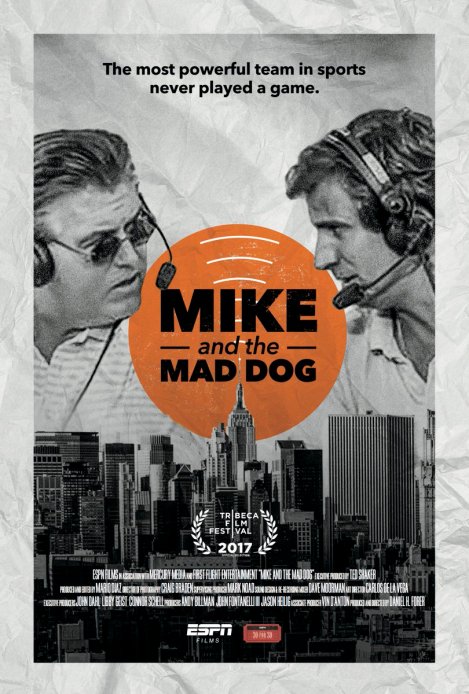 Love them or hate them, any appreciator of grown men yelling at each other over the airwaves in the name of entertainment has Mike Francesa and Chris “Mad Dog” Russo to thank for giving birth to modern sports radio talk. At the height of their success, no one could touch them.

Directed by 10-time Emmy Award™-winning documentarian/writer/producer Daniel H. Forer, Mike and the Mad Dog offers one final parting gift to fans of the sports talk show that aired for 19 years and five — count ’em, five — hours each weekday afternoon on WFAN 101.9 FM. Nestled deep in the heart of New York, “The Fan” is famous for becoming the first radio station in the country to offer 24/7 sports coverage. Over the course of a fleeting but highly entertaining hour Forer digs into the origins of the show, the personalities that made it happen, and the mechanisms that both drove its success and that ultimately led to its downfall.

The first broadcast of Mike and the Mad Dog aired in September 1989. At the time there was little evidence to suggest the experiment would be successful, never mind end in the tearful manner in which it did in August 2008. Francesa had done the grunt work at CBS, starting out as a stat boy and college sports analyst, before expressing an interest in shifting over to radio broadcasting. WFAN at the time were looking for established talent rather than someone with no experience. Though Francesa’s encyclopedic knowledge helped him gain footing, station management had no desire to give him his own platform.

Chris Russo, on the other hand, was all but born on-air, his voice “a bizarre mixture of Jerry Lewis, Archie Bunker and Daffy Duck.” He was energetic, a Tasmanian devil behind the mic. Russo began his career at a station in Central Florida, where his thick New York accent was so alien he was sent to a speech therapist twice a week. He later relocated to The Big Apple, briefly dipping his toes into Christian radio at WMCA before becoming roped into a most unlikely gig with WFAN, where he’d spend the next 19 years foaming at the mouth over the days’ hottest sports stories.

Mike and the Mad Dog was created out of a need to better reach WFAN’s target audience — the city proper and its surrounding suburbs. A more traditional, buttoned-up format predated it and featured a revolving door of national anchors who all failed to resonate. The station desperately sought a more local feel, and in the seemingly diametrically opposed Francesa and Russo they struck gold. Not only were they true-blue New Yawkas, they were bona fide geeks who spoke in the language of the typical sports fan. They both loved sports and talking about them — they just didn’t really love the prospect of talking about them with each other.

The documentary covers an impressive amount of real estate, touching on a number of personal aspects before moving beyond the personalities and their disparate upbringings to address the numerous controversies they became involved in and occasionally triggered themselves. From the Don Imus firing in 2007 to the infamous broadcast on September 12, 2001, Mike and the Mad Dog have taken the show to some incredible highs as well as cringe-inducing lows. Consistent with their style, they dealt with backlash in their own acrimonious ways.

Given how routinely Francesa and Russo together (and individually) became the thorn in the sides of local sports figures — be they current team owners or retired players (even columnists, like the Post’s Phil Mushnick weren’t exactly safe) — those events weren’t aberrations. Of course their stance on Imus and reaction to 9/11 also didn’t do much to dispel the notion that after so many years the two had developed egos larger than the city they were covering. Their vast sports knowledge wasn’t to be questioned, yet it also couldn’t save them from getting into trouble. Forer holds interviews with friends and former colleagues who admit there were times the two just couldn’t help themselves.

Arranged marriages can be awkward, as the pair attest on camera. That’s how they viewed their relationship — less a natural coming together as it was a forceful shoving. Chemistry lacked to say the least in the early going. Yet, as time passed, they found their rhythm and gained a respect for each other, with Mike in particular being impressed with his very animated partner’s ability to hold his own in a debate. After so much time together, they became more like a family and the documentary effectively captures that spirit. As Russo might put it, sometimes family drives ya frikkin’ nuts.

Recommendation: Mike and the Mad Dog is an intriguing exploration of the way ambition, recognition and egotism all play a hand in the shaping of high-profile careers. It is close to essential viewing for those who have lamented the break-up (now 10 years ago) and have never quite gotten over it.