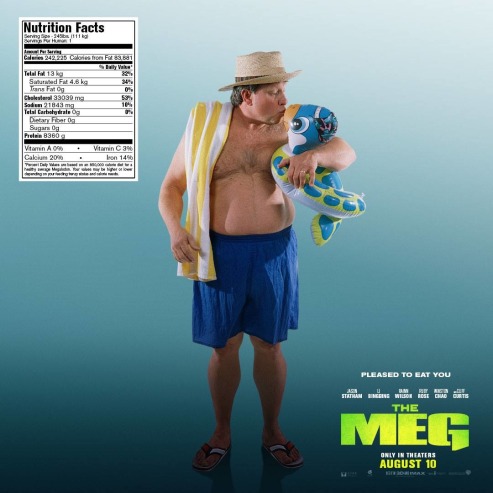 More like . . . The Meh. I really couldn’t give a shark shit about this movie, but here goes this anyway.

It says something about Jason Statham‘s box office pull that I found my tingling buttocks planted in a seat on Cheap Ticket Tuesday, ready to see some hapless ocean-goers getting torn apart by a man-hunting, 70-foot prehistoric shark, despite what had been opined about his new action film. Critics by and large were not impressed. If not hatred, the overwhelming sentiment I’ve picked up on has been disappointment. And yet I went anyway, lured by the promise of the Stath vs said Meg(alodon).

Now I see why. It isn’t actually the fact that The Meg ultimately becomes the pilot fish to Steven Spielberg’s Jaws (a bad analogy TBH, because there isn’t really any kind of symbiotic relationship between the two films — in fact it’s very nearly the opposite, with The Meg taking and taking and taking ideas and never shaping them into anything truly original, something you can point to and say definitively, “Oh yeah — that was The Meg!”). No, Jon Turteltaub’s latest mediocre-athon is just really uneventful. It is directionally uninspired and the pacing listless, every main character a non-entity with not enough flesh on them to entice even an eight-footer (with the rare exception of young Sophia Cai, who plays the precocious daughter of Li Bingbing in the film).

The Meg spins a tale of redemption for Statham’s deep sea diver Jonas Taylor, who doesn’t exactly have the best track record of saving everyone when shit turns sideways. In this film, the hero goes something like 2/5 in the life-saving department. At the time, a doctor (Robert Taylor, bland) declared Jonas insane, because that’s what being that far down does to you (kind of like what happens to climbers on Mt. Everest). Naturally the grizzled ex-diver, now boozing his life away in Thailand, gets coaxed back to the Marianas Trench after a disaster occurs at Mana One, an underwater research lab in the heart of the Pacific financed by billionaire Jack Morris (Rainn Wilson, decently hammy).

It’s all so mechanical, the plot developments and the execution thereof. The shark attacks the facility, trimming the crew down to its essential survivors. Then we abandon ship for . . . well, another ship. They’re gonna need a MUCH BIGGER boat though. The wealthy financier realizes his investment is no longer a tenable pursuit and attempts a cover-up by taking action on his own, but perishes (in an actually hilarious way), thus paving the way for a team-up between the fearless Stath and Bingbing’s brilliant scientist/reckless mother as they try to stop the megalodon from reaching land and wreaking havoc upon all.

But what about the shark itself? If you’re asking me, he’s the best actor in this whole water-logged rig. Give it a posthumous Fin d’Or.

Recommendation: Jason Statham takes pride in his work outs. Just check out those abs. Like, Jeezie Petes. The rest, though? Just a bucket of chum really.

Quoted: “He looks heroic, and he walks really fast. But he kinda has a negative attitude.”