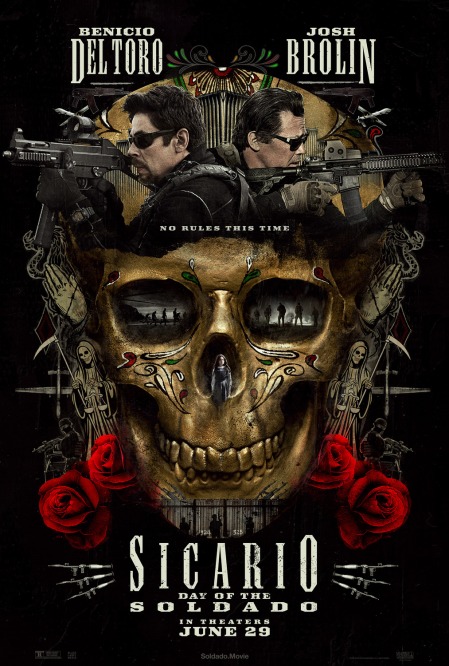 I need to file a complaint. Sicario 2: Day of the Soldado is an eyesore of a title. It is an awkward concession, the plasticine product of a marketing scheme designed to put the movie in “the best position to succeed.” Really though, it’s just poised to confuse. Elsewhere (outside of North America, that is) you’ll find the same film operating under various guises, such as Sicario 2, Soldado and Sicario without Emily Blunt.

Good. Now that that resolved something, maybe now we can talk about the movie itself.

And what a vicious movie it is. Fortunately, at least with regards to quality, the content is not the title. Italian-born director Stefano Sollima confidently carries the torch passed to him in what appears to be a bonafide crime saga anthology in the making. While Soldado indeed navigates the same ethical and tactical morasses Villeneuve established in his instant classic from 2015, it’ll be remembered more for its even bloodier, soul-bruising action bent. And yet, in the spirit of its predecessor and despite the absence of an audience surrogate like Blunt’s Special Agent Kate Macer, Soldado effects the thrill of privileged access to things we should not be witnessing.

In 2018 the game has changed and so have the rules. The war against the ruthless Mexican drug cartels has taken an even more nefarious turn. Rather than the smuggling of illicit drugs, the focus has shifted to the prevention of human trafficking — specifically the transporting of bomb-making desperadoes across the line. An opening salvo details in gut-wrenching fashion precisely what CIA black ops agent Matt Graver (Josh Brolin) and the enigmatic hitman Alejandro Gillick (Benecio Del Toro) are up against this time. We experience first-hand in Kansas City the callousness with which the bad guys are able to dispatch with the innocent.

Graver, who specializes in getting his hands dirty, is called in by U.S. Secretary of Defense James Riley (Matthew Modine) for an assignment seemingly tailor-made just for him. Given such rampant violence, the American government has reclassified these gangs officially as terrorist organizations. Their objective now is to exacerbate tensions between the factions to the point where they simply wipe each other out. Victory by way of escalation, not extradition.

To get things rolling, Graver enlists his friend to carry out a ballsy false-flag operation involving the kidnapping of Isabel Reyes (a crushingly good Isabela Moner), daughter of the sadistic kingpin Carlos Reyes. The mission gets a bit more complicated/spoiler-rich but suffice it to say it doesn’t all go off without a hitch. Double-crosses and unexpected escapes crop up along the way, and it isn’t long before Graver and Gillick themselves question just what it is they are trying to accomplish. (And, as an aside, this is the coldest and most ruthless I have ever seen Catherine Keener. Consider me now a big fan.)

Crucially, Taylor Sheridan returns for this loosely-connected sequel. Once again his screenplay masterfully simplifies a lot of technical jargon without diluting the essence of the conversation. The gifted screenwriter is of course blessed with acting talent to match. Bad-boy Brolin feels at home in his über-niched role as a sandals-wearing DoD enforcer, while the aforementioned Keener and Modine lend incredible weight with their government agents standing at a safe distance. Del Toro may never have been quite this interesting (or this blood-caked). Meanwhile, the child actors — yes, absolutely Moner, but also introducing Elijah Rodriguez as the wayward Miguel — commit to their emotional load-bearing roles as consummate professionals.

Sheridan’s world-building also impresses. What else is new? He presents the labyrinthian network of black market dealers and uneasy relationships among different levels and loyalties of law enforcement as an ever-shifting landscape of personal vendetta and evolving objectivity. A lot of traveling is required and to exotic locations such as Djibouti and the Gulf of Somalia, and we hop back and forth across the border enough times to get dizzy. The director has to temporarily suspend reality in a few places to accommodate character arcs, but even with a few cut corners the main flow of the narrative rarely, if ever, exceeds our grasp — even while we shield our eyes from the more gory details.

Soldado isn’t as sophisticated a drama as what came before. This movie is more of a blunt instrument than a think piece, and it has no interest in being anyone’s friend. In almost any other production it would take some effort to justify this level of bloodshed. No, Soldado doesn’t exactly champion humanity, but it is a reflection of it. And yes, it should upset you. It should make you cringe, if not for Alejandro and friends then for the next generation caught in the crossfire. 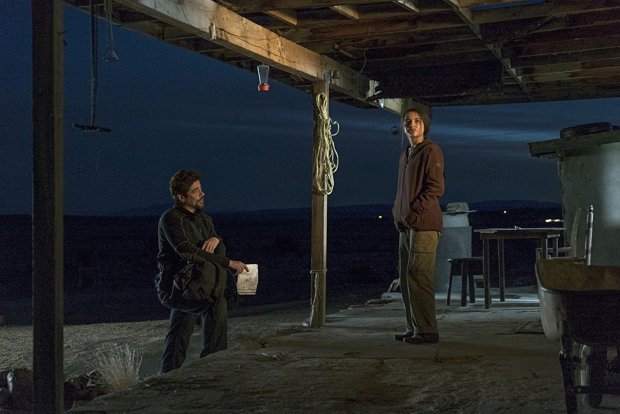 Recommendation: Savage confrontations and a dearth of feel-good moments characterize this action thriller of above-average intelligence (poor titles notwithstanding). Soldado should satisfy fans of the original with its continuation of the same blood-soaked moral quandary established three years prior, even if a lot of nuance is lost in the transition. And the way this second chapter leaves you — left me, anyway — is nothing short of morbidly fascinating. I can’t wait for a third installment.