Steven Soderbergh is to date the most recognizable filmmaker to have publicly touted the virtues of making movies using your own smartphone. We aren’t talking Instagram videos of course, but full-length feature films. In this case, a gritty horror film about a young woman who can’t get away from her stalker. The director behind popular, lavish productions like Ocean’s Eleven and Traffic has now come to embrace the increasingly popular backpack-style approach to filmmaking as a means of avoiding unwanted financial headaches and focusing upon that which matters most — the actual making of the film.

Unsane was filmed entirely on an iPhone 7 Plus. Unfortunately the final product ends up being an indictment on that particular choice of tech. Much like our possibly mentally unstable protagonist, the film simply does not look well. The color scheme is pallid, almost sick-making in light-starved environments and the claustrophobic spaces into which we are forced do nothing but bring attention to the inferiority of smartphone cameras. I’m no expert on photography or cinematography, but as I understand it the iPhone does not give the user the option to adjust aperture (the hole in a camera lens that determines how much light will be let in) and Unsane‘s ugly aesthetic attests to these limitations. The story itself is not all that engrossing, but the entire enterprise suffers on a technical level to the point where the low overhead becomes very difficult to ignore, much less defend.

Unlike Sean Baker, who found great success in his 2015 street drama Tangerine, interestingly among the first few feature films to dabble in Apple, Soderbergh’s implementation tends to draw attention to style and like the worst of found-footage (which this film mercifully isn’t), ends up more as a gimmick than the product of creative budgeting. That’s an issue made more apparent by the fact that Unsane doesn’t move us the way it should, particularly in post-Harvey Weinstein Hollywood. The performances are strong, especially that of star Claire Foy, but Jonathan Bernstein and James Greer’s screenplay doesn’t develop into much more than a fairly standard psychological horror in which the viewer’s perception of reality is constantly being challenged. Only, it isn’t constant. In Unsane, we are only for a brief moment unsure whether to trust the ‘hero’ or the needle-wielding orderlies against which she constantly rebels.

The British actress plays a driven businesswoman named Sawyer Valentini. The promise of a new, less complicated life awaits her in a new city, some 400 miles away from her hometown, her mother (Amy Irving) and her ridiculously maladjusted man-child of an ex, one David Strine (Joshua Leonard). But when one of her first attempts to truly move on turns south thanks to unwanted and repressed memories rising up at a most inopportune moment, Sawyer finds herself turning to a local mental health facility for answers. During the course of a promising discussion with one of the experts, Sawyer confesses she has contemplated suicide in her past. The next moment she is being admitted as a patient, apparently against her will. Her privileges and personal items are quickly forfeited at the door to some decidedly unsympathetic staff.

Unsane starts strong, but the disorienting effect created by a series of personal invasions quickly disintegrates like a pill in water. Chalk that up to how impatient Soderbergh is in steering the film to its bloody and predictable conclusion. The best part of the film is simply getting settled in at this really creepy, depressing joint. A 24-hour watch becomes a weeklong stint as Sawyer’s aggressive self-defense mechanisms are used against her as proof of her instability. In that time she meets a few of the patients, many of them wretches, like Juno Temple’s Violet. But then there is also Nate (Jay Pharaoh), who appears to be the only person willing to listen. More importantly, she also begins experiencing what may or may not be hallucinations of her ex, which sends her into more apoplectic fits that in turn send her into solitary confinement.

Sawyer’s descent is undoubtedly disturbing, even difficult to watch at times for reasons beyond the fact it is literally difficult to see what’s going on. The film touches on certain disconcerting realities of the social media age in that invisibility and anonymity are precious commodities, especially when you are the target of a stalker. (And not to keep pouring it on, but I really wish this dynamic wasn’t introduced by a needlessly distracting cameo.) Foy is a force to be reckoned with in her character’s darkest moments — and I hope this is what we are witnessing; I don’t know how it gets any darker than what goes down in the rubber room. And the fact she isn’t an entirely sympathetic individual gives Unsane more of an edge. There is such a lack of comfort everywhere you turn.

Indeed, those anticipating a Soderbergian take on One Flew Over the Cuckoo’s Nest or even Shutter Island would be better off re-watching those films and just imagining what they would be like with someone else at the helm. In fact they would be even better served going back to Side Effects, a film that spun a similar tale of corrupt institutions in cahoots with special interest groups — another in which we couldn’t ever be sure who was telling the truth. That film may have been convoluted and ultimately confusing, but given that both films deal in issues of mental health and the real-life nightmares pharmaceutical companies often induce, Unsane gives us the ability to compare. And it is the weaker film, even ignoring Soderbergh’s attempt to thematically merge grainy footage with his character’s fraying mentality.

And in case you want to know, I have a Samsung Galaxy S7. And I love the way it makes me feel like a pro when I take pictures. 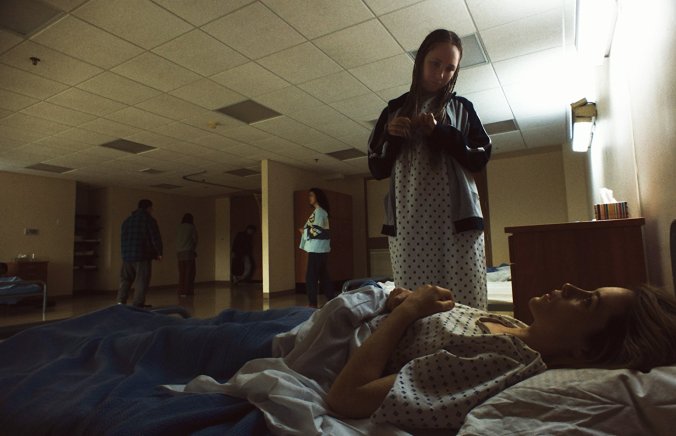 Recommendation: Familiar B-horror filtered through a rather off-putting visual aesthetic makes for an iffy recommendation. If you support everything Steven Soderbergh has ever done there is a great chance you’ll like this more than me. I’m not subscribed to the thought he is a particularly original filmmaker, and that may have hurt me here. With all my issues with the way the film appears, it is still impressive what these guys are able to do in 10 days with a phone on what basically amounts to a selfie stick.