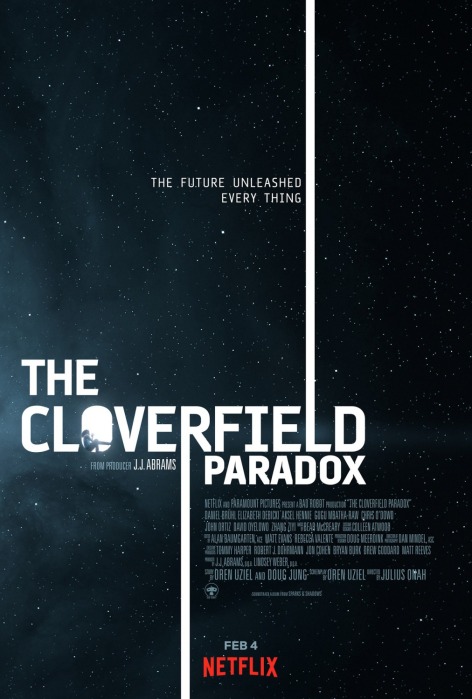 The Cloverfield Paradox, a surprise addition to the Cloverfield collection which debuted on the heels of Super Bowl LII, is itself an experiential paradox. How did I just sacrifice an hour and forty-five minutes of my time and yet feel like I watched nothing at all? I certainly didn’t just watch a Cloverfield movie. Yet they’re telling me I did.

This third chapter revolves around a group of earthlings orbiting our planet in the space station Cloverfield. The year is 2028. For two years, while basking in the ultimate bird’s eye view of home, the crew, a united front of international experts, have been unsuccessful in using a particle accelerator to stem the tide of a global energy crisis. Of course, operating such a scary and complicated device carries with it all sorts of disastrous consequences. Like, you could rip apart the fabric of space time and inadvertently introduce xenomorphs into our reality. Or worse, Jar Jar Binks from a galaxy even further away.

After what seems to be a major breakthrough the crew find themselves not celebrating by dousing themselves in the champagne of the heavens, but instead wildly off-course, distanced from Earth and in ways that are kinda-sorta hard to explain. With a lack of signposts pointing them down the right galactic avenue and with bizarre occurrences on board the ship becoming more frequent, how will our fearless heroes ever make it back home? And if they do, to what degree will their space madness and the anarchy down below have advanced?

The Cloverfield Paradox is populated by quality actors who play their parts well enough. But the script has no idea what to do with any of them so it just caps off their trajectories with a fancy, thoughtful death to make them seem unique. It’s good to see that Chris O’Dowd‘s sense of humor is not lost in space, and he also wins the Most Interesting Character Award by way of possessing one of the most interesting arcs. Someone loses their mind then has worms explode out of their body Alien-style, only to have their corpse violated post-mortem. There are other bizarro occurrences, but I’m compiling a Best Of list here and those (A) don’t make the cut and (B) are more spoiler-rich.

Not that I would necessarily feel evil for divulging more secrets. After all, it is amazing how much damage a film title can do. At least one writer has interpreted Oren Uziel’s Event Horizon-esque plot as an origins story. After double-checking, the internet seems to be in this writer’s corner. If this is true, if Paradox is intended to lay the groundwork for the past (Cloverfield (2008) and 10 Cloverfield Lane (2016)), it manifests as one of the weakest, most poop-throwingly dumb origins stories I have ever seen. I’m left wondering whether there would have been fewer issues had the film retained its working title God Particle. Bye-bye, burden of expectation. What we would be left with is just another generic tale of how highly qualified astronauts lose their cool at all the wrong moments yet make just enough right calls to SURVIVE SPACE!!

Recommendation: A generic sci-fi thriller set in space masquerading under the banner of a Cloverfield sequel/prequel. The one advantage of this particular release is you won’t have to travel far for the disappointment. +10 Bonus Points for convenience, but then deduct 100 for the bait-and-switch. This isn’t Cloverfield; this is a much less violent, less Sam Neill-eye-gouging Event Horizon.

Quoted: “Logic doesn’t apply to any of this.”

13 thoughts on “The Cloverfield Paradox”