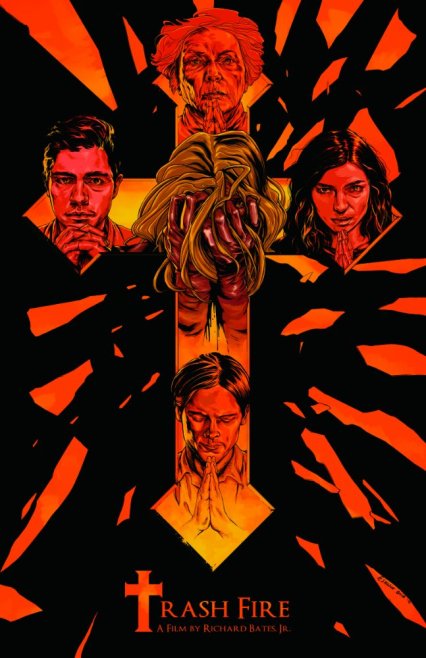 Richard Bates Jr’s third film revolves around a family you’ll be glad you’re not a part of. That might be the understatement of the year. You’ve never seen family dysfunction like this, unless of course you have seen Psycho.

Not that I’m suggesting the relatively immature Trash Fire wakes up the echoes of Hitch’s classic. After all coincidence plays a large part here — that its director shares the surname of one of the most recognizable movie villains of all time compels me to draw comparisons more than anything. However, there is one other element these films share, one that’s harder to ignore, and that’s the influence of a severely troubled matriarch. In Psycho it was mother. In Trash Fire it’s grandma. Dear, sweet old grandma.

The film opens on a sour note, introducing us to miserable Owen (Adrian Grenier) who is unloading on his therapist about how when he was younger he planned to commit suicide after his parents died so he wouldn’t have to feel guilty about it. He literally resents being alive and goes out of his way to make the prospect (of living) a nightmare for those who dare get near him, such as his longtime girlfriend Isabel (Angela Trimbur), whose friends and family he can’t even pretend to tolerate.

When Isabel tells Owen she’s pregnant, the couple is confronted by a life-altering decision. It’s not the one you might expect, given Owen’s toxic cynicism forged in the crucible of an abusive childhood — one that, when finally explained, makes me wonder who really had it worse, Owen or Norman. We are led to believe that in some ironic twist of fate rearing a child might be the best thing for the couple. A second chance for a thoroughly broken man, a ray of hope for his long-suffering concubine.

To feel more comfortable about such a commitment Isabel establishes one condition: They must pay a visit to Owen’s grandmother Violet (Fionnula Flanagan) and sister Pearl (AnnaLynne McCord) so she can meet his family and he can make amends after years of estrangement following a house fire that indeed killed his parents and rendered Pearl an “abomination” and a shut-in.

Trash Fire struggles early despite its bold, frothy opening. The first half is spent building up the “relationship” — necessary toiling for the horror that’s soon to come. Once the story shifts to granny’s house the film really goes to work, endeavoring to strip what little humanity there is from the proceedings. Flanagan, whose age and frail physicality emphasize the film’s gleeful perversion, is legitimately terrifying. She is the quintessential religious zealot, a termagant whose TV is set only to channels vomiting fire-and-brimstone sermons and who instantly takes a dislike to Isabel, for she reminds her of the “whore” that was her own daughter.

Down the back stretch of this 91-minute production you’ll find nods to more well-established horror mythologies — shades of The Ring, Carrie and yes, Psycho, come and go, all while Trash Fire‘s slavish devotion to nihilism is intended to both support the film’s brazen title and separate its familiar content from the pack. And yet, the petulance reminded me of Gaspar Noé’s attempts at being as shocking as possible in Irreversible, where he famously introduced ultra-low-frequency sound in the film’s opening half hour, the intent being to physically yet subtly make viewers feel ill.

All of this is to say that the nastiness employed here works but only when you are susceptible to it, when exposure is minimal. There comes a point in Trash Fire, perhaps when we see Violet pleasuring herself to those televangelists, where the maliciousness diminishes in effect and threatens to undermine Owen’s legitimate problems. On a second viewing, I suspect familiarity will do considerable damage. For a once-through, however, Trash Fire is entertaining in its own weird little way.

Recommendation: Pitch-black comedy supposedly courses through the veins of this quirky and downright uncomfortable indie horror. As the people over at The AV Club aptly put it, perhaps only the most bitter nihilists will find the film funny. I did find the film amusing in fits and starts but more than anything I admired the bold performances put on by Adrian Grenier and Fionnula Flanagan. But now I want to watch something where the latter plays a nice lady. Maybe a grannie who bakes cookies. Something, anything, to cleanse the palate.

Quoted: “For as long as I can remember I’ve been waiting for my parents to die. And there they were, dead.”