Syria is a nation currently being torn apart at the seams as a multitude of political actors continue to wrestle control of its future away from one another. The better part of the last decade has been spent in bloodshed as coalitions of rebels, extremist groups and other armed entities not exactly sympathetic to Syrian President Bashar al-Assad have set their sights on total upheaval. What began in the capital city of Damascus as peaceful protests for democratic reform and the release of political prisoners escalated into a hostile and bitter conflict when al-Assad used brutal force to try to quash the potential uprising. These events, of course, have all contributed to the growing refugee crisis.

Orlando von Einsiedel’s The White Helmets offers a window into this struggle, providing viewers access to ground zero as they follow around a group of Syrian civilians who have taken it upon themselves to search for and recover bodies — dead or alive, friend or foe — from the carnage created by aerial attacks that have been decimating heavily populated cities like Aleppo and Idlib on a daily basis. The 41-minute film won the Oscar for Documentary Short Subject at the 89th Academy Awards, marking the first win for Einsiedel and his second nomination, following his previous feature-length documentary Virunga in 2014.

Incorporating footage compiled by the activists themselves, such as Khaled Khateeb (who was one of several prevented from attending this year’s Oscars by President Trump’s travel ban), into a rather straightforward procession of testimonies delivered directly to camera by a handful of volunteers, The White Helmets proves an unsurprisingly sobering watch. The footage captures the men working in conditions that are bad turning worse. In the wake of Russian intervention — a development since September 2015, one that has sparked humanitarian outcries across the globe on the assertion that their involvement has proven more destructive than the action taken by Syria’s own government and even ISIL — the White Helmets appear to be the last bastion of hope that people living in targeted areas truly have.

While the preservation of hope is what fundamentally galvanizes us to keep watching, if only through our hands, von Einsiedel is careful neither to exploit nor romanticize the role these first responders play. Even still, you should know that the footage is presented in a raw and unedited form, and is often graphic and upsetting. Not that that isn’t obvious, but it bears repeating as it is, to be brutally honest, what makes the film such an essential watch. The savagery that’s been going on for over six long years needs to be acknowledged.

The implications of the violence are also, somewhat sickeningly, more complex than they first appear. While the initial justification behind the bombings was to eliminate rebel and jihadist groups from Syria, over time Russia has become increasingly more involved in the state’s fight to reclaim territory, which has necessarily meant becoming more active in eliminating the opposition, all splinter cells and groups coming to their aid — groups like the Syrian Civil Defense, the White Helmets. It is explained how their presence has actually incentivized Russian and Syrian aircraft to carry out what are called “double-tap attacks” in which an initial strike is delivered, followed swiftly by a second, the goal being to specifically target the White Helmets. Such is the reality these men face each time they “go to work.”

Amidst the barbarity, from underneath piles of concrete and rebar ultimately emerges a powerful testament to real-life heroism, courage and sacrifice. In fact the film metamorphoses into a thing of beauty when it addresses the positive impacts the first responders are making and will continue to make for the foreseeable future. It’s not simply the lives that are being saved, but the relentless determination and indiscrimination of the search itself. The rescuing of a one-week-old infant who had been trapped under a collapsed ceiling for over 16 hours is a scene that defies description — in part due to the incomprehensible hatred that created such circumstances, but mostly because the service that the White Helmets provide couldn’t be any more dramatically expressed.

Of course it’s a film without much in the way of closure. The work of the White Helmets shall continue as long as there is conflict. And at least one in the film makes it clear that their commitment is lifelong. That’s really where the story lies. It’s not about the war and the suffering. It’s not about hatred or religious extremism. It’s actually about the exact opposite of what the bombings are trying to achieve. This is about ensuring that the cycle of life can and will continue, even when the future is this uncertain. 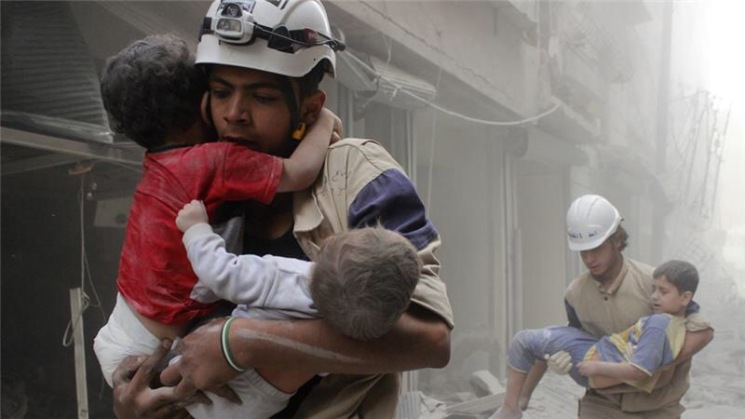 The White Helmets have been credited for saving over 70,000 from the fallout from airstrikes. It has been estimated that since the Russian bombings began in late ’15, over 150 White Helmets have lost their lives as well as nearly 3,000 innocent civilians.

Recommendation: Equally heartbreaking and life-affirming, these will be perhaps some of the toughest 40 minutes you’ll experience in some time. There’s no hiding from the devastation in Syria in The White Helmets, nor should there be. Because of the opportunity it provides us to get an understanding of the victims’ perspectives of the bombings, this becomes a short film that you simply have to watch.

4 thoughts on “The White Helmets”