Jordan Peele announces himself as a talent to keep an eye on with his surprisingly enlightening and even more entertaining directorial debut, the horror-comedy Get Out. His first try proves an early candidate for sleeper hit of the year, a film that manages to balance provocative themes, an interesting premise and a handful of solid performances in a way that’s rare even for seasoned filmmakers.

Get Out centers around a young mixed-race couple, Rose Armitage (Allison Williams) and Chris Washington (Daniel Kaluuya), who visit the former’s parents for a weekend. While Rose feels they’ve reached that point in their relationship, Chris isn’t sure how her parents are going to respond to him being black. She hasn’t told them because she’s adamant the only thing he needs to worry about is how uncool they are.

When the two arrive, awkwardness wastes no time setting in. Rose’s father Dean (played by a nearly unrecognizable Bradley Whitford) is a neurosurgeon who immediately sets out on a crusade to impress Chris with aggressive politeness and generally overcompensatory behavior. He takes “[his] man” on a tour of the house, making sure to let Chris know he’s not one of those ignorant types. After all, he has great appreciation for Jesse Owens and if he could, he would have voted for a third term for former President Obama.

His wife Missy (Catherine Keener) is a psychiatrist whose hypnotherapy may not come free of charge but it sometimes does without patient consent. I’ve never really liked Catherine Keener, even while acknowledging the knack she has for portraying emotionally unstable weirdos. In Get Out her eccentricity functions as more than a character trait. Missy is actually more a plot device than a character, which isn’t nearly as disappointing as it sounds. Rose has a younger brother too, Caleb Landry Jones’ wild card Jeremy, whose domineering albeit brief presence threatens to undermine the film’s subtle strategizing. He’s a bit harder to take seriously.

As are the numerous black servants on the premises. They’re all so goofy they inadvertently become beacons of comedic relief rather than legitimate concerns. And this is the issue I have with the hybrid genre: knowing which reaction is appropriate can prove frustrating at best. Even if their behavior is intended to be funny, it’s not quite funny enough to be convincing in that way either. I chuckled at a couple of the interactions, particularly with maid Georgina (Betty Gabriel), but felt bad when I did. It was awkward. Luckily there are other instances where the humor succeeds and actually enhances the experience — see Lil Rel Howery as Chris’ security guard friend, for example.

As Chris wanders the grounds snapping photos and asking seemingly innocuous questions of the staff, wafts of institutionalized racism become stronger. It has become evident Chris’ discomfort isn’t just personal. There’s a larger, more sinister dynamic at play, suggested by the servants’ unnatural mannerisms and body language. And the discomfort only grows as more of Rose’s family unexpectedly show up for the reunion she forgot to tell Chris about.

Peele, no stranger to skewering the politically correct in his successful and often controversial Comedy Central sketch show Key & Peele (and whose co-host you can find starring alongside him in 2016’s hit action-comedy Keanu), has found a way to expand his observations about the American society in which we live today into a full-length feature presentation. And he does so without falling back on a blueprint that has treated him very well thus far. He also avoids overtly politicizing his message.

Get Out could have manifested as a series of skits all building toward some unifying theme. It could have been, like Logan to some degree, a specific jab at a specific American president putting into effect specific policies. Instead the fiction is broader, more immune to current political trends. Peele legitimizes his cause with insightful commentary and an effortlessly likable lead — a seriousness of purpose only moderately undercut by a few emotionally confused cues and a truth-revealing climax that doesn’t quite live up to the standards set by the movie that preceded it. 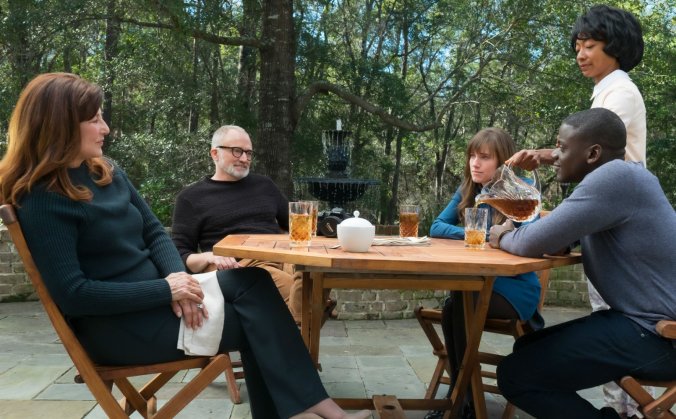 Recommendation: Get Out is a movie that has gotten people talking. It’s going to be one of the surprise hits of the year and the hype is pretty much justified as Jordan Peele very clearly has his finger on the pulse of what not only the typical moviegoer wants to see in their movies, but that of film critics and skeptics as well.

Quoted: “Man, I told you not to go in that house.”