I love a good survival story and while Alive certainly fits the description of survival story it’s neither a good movie nor one that I will ever love — a would-be toe-curling drama watered down by perhaps the softest R-rating in the history of cinema. And even though these sorts of films are never recognized for their achievement in performance, it is a surprisingly poorly acted affair.

It’s clear that for director Frank Marshall, striking the right tone was priority one, if not the only one. He crafts a fittingly solemn tribute to the Uruguayan rugby team whose charter plane crashed high in the Andes en route to a game in Chile on October 13, 1972, and who were ultimately forced to resort to cannibalism. Of the 45 passengers on board, only 16 lived to tell about it. Alive does champion the human spirit but it never manages to give the concept a face, and never allows the audience to identify on a more personal level with this account of individual and collective bravery.

The event has inspired a number of redressals, including the 1974 novel by award-winning English novelist Piers Paul Read, upon which John Patrick Shanley’s screenplay is based. His story wastes precious little time in acclimating the audience to team camaraderie as they anticipate the upcoming match on the flight over. After an admittedly harrowing crash sequence viewers come to experience over the course of two cinematic hours the same slow decay of flesh and hope for rescue the athletes endured for three brutal months.

Alive is a slow-going trudge through the psychological deterioration of youngsters caught in an unimaginable situation. It’s decidedly more suggestive than literal, failing to really dig beneath the surface of the social and philosophical dynamics at play. There’s something to be said about Marshall’s refusal to resort to gore, but the notion he would be exploiting these people by showing some visceral scenes of desperation is ridiculous. As it stands, the dramatization largely leaves the audience cold. Not unsympathetic, but uninvolved.

Alive employs a mostly unknown cast to portray the players — a decision that, in theory anyway, reinforces the notion that ordinary people are often capable of accomplishing extraordinary things in the face of life-altering circumstances. A young Ethan Hawke as Nando Parrado (one of the lucky 16 who served as a technical advisor on the production) stands out among the rest, not simply because he has more stuff to do but because he’s the only actor who convinces us that he is who he is playing.

In reality, the lack of experience in front of the camera does real damage to the film’s credibility. Low-rent acting and awkward dialogue are the main culprits but the use of some suspect, barbecue-chicken-looking props also make the cost-effective filmmaking strategies abundantly clear. The backdrop of the Andes, on the other hand, is quite convincing, with a number of atmospheric shots of a most hostile South American landscape in the grip of winter serving as a sobering reminder of our fragility.

Curious about what’s next? Check out my Blindspot List here. 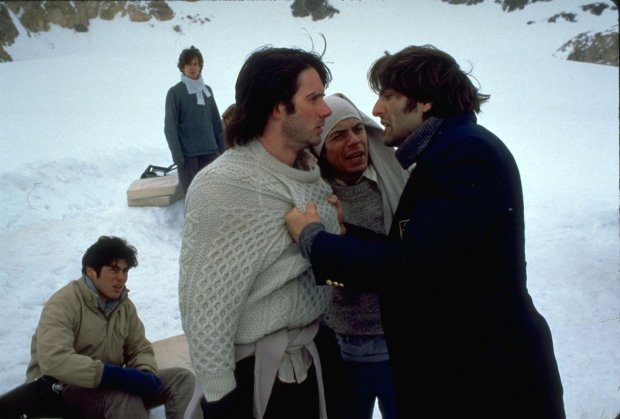 Recommendation: Disappointingly generic and horribly acted, Alive is in some ways the film I have suspected it of being for some time now. I’m not sure why it made my Blindspot list but at least now I have seen it. And if you haven’t yet, may I recommend instead the documentary based on this. Or perhaps pick up the book. Ethan Hawke is better than the rest but he doesn’t exactly save this from mediocrity.