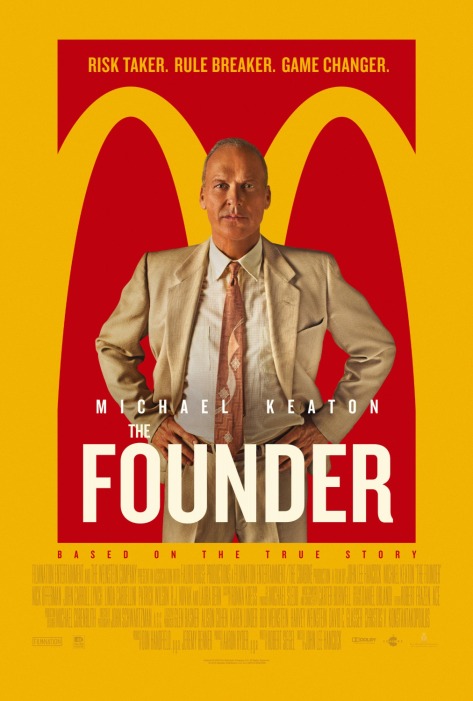 Michael Keaton is such a good actor he will make you feel bad for McDonald’s. Not the McDonald’s of today, mind you, who never honors your request for no pickles, but the quaint San Bernardino burger stand run by the McDonalds brothers, the place that always got it right.

On a philosophical level the movie intrigues because it challenges today’s status quo, it makes us wonder if McDonald’s was always destined to be the soulless corporate machine it has ultimately become. Sure, it’s a little sentimental for the good old days and a twee sequence breaking down the logistics of the assembly line-style serving platform verges on romanticizing that which is decidedly not romantic, but The Founder also genuinely earns your attention and does well to entertain the notion of what could have been had Ray Kroc (Keaton) never happened.

For Maurice ‘Mac’ (John Carroll Lynch) and Dick McDonald (Nick Offerman), fate comes in the form of a 50-something-year-old milkshake machine salesman who sees their one-off restaurant as a potential gateway to the future. Having no luck selling his own product, Ray finds himself making the trip out to southern California when he receives an order for six of his machines, thinking there must be a mistake. In his experience no restaurant has been busy enough to justify more than a couple.

What he finds in San Bernardino is what Dick affectionately calls a “symphony of efficiency” — a system capable of delivering fresh, delicious beef patties and just-salted-enough potato cut fries to the masses in a way that conveniences both the customer and the business. After taking a quick tour of their facilities, Ray becomes convinced the brothers have the potential to revolutionize the way friends, families, even entire communities eat. Humbled by their ability to merely run an operation after having survived The Great Depression, the brothers are very wary of change.

Nevertheless, the very next day Ray is back with new gusto. He’s done with milkshake machines, now imploring his new friends to expand their operations nationwide. What he sees now are dollar signs, not Golden Arches. Profit, not product. A cultural revolution as opposed to a social gathering. In an impassioned speech, Ray encourages the brothers to see what he sees, a restaurant as a symbol of national pride: “Courthouses. Churches. Arches . . .”

Plot mechanics notwithstanding, The Founder plays out in often surprising and dramatic fashion. We have a trio of stellar performances to thank, as Lynch and Offerman lend a naivety to the McDonalds that makes them easy to like even if such qualities ultimately must be faulted on some level. The true star, naturally, is Keaton, who seems to be channeling a little Daniel Plainview into his mightily unflattering portrayal of an entrepreneur. Keaton makes it easy to believe this is a man who would sooner kick a kid’s lemonade stand down and tell them it was poorly constructed than pay the 50 cents for a cup and walk away all smiles.

The Founder is so fascinating to watch because Ray Kroc is fascinating. He is both an angel and the Grim Reaper and whether you root for him or want him to fall flat on his face is immaterial. His transformation from a nobody into an industry icon is as insidious as it is compelling. This is a man who made things happen, an immovable object moved only by his own dogged determination. There’s an objective reality to what he accomplished and impressively that is not lost even as we endure scene after scene of him gutting the already gutless, those who lack both the emotional and financial wherewithal to save themselves from ruination.

It’s a testament to the power of good storytelling that of all the things that make you sick at the end of The Founder, greasy food isn’t one of them.

Recommendation: A movie about how far McDonald’s has come in 50+ years, now that sounds like a recipe for cheesy product placement and insanely fattening sentimentality. But John Lee Hancock’s film is actually, legitimately entertaining and surprisingly revelatory and far from the commercial advertisement it could have become. You should go see it to have a better understanding of where we are today and to see an absolute stunner of a performance from Michael “I’m having a nice little career resurgence of my own” Keaton.

Quoted: “I want a divorce.”