The prospect of finding cinematic gold in a true story directed by “the guy who wrote Traffic” and starring the winsome (and also Oscar-winning) Matthew McConaughey seems a sure thing. Unfortunately their first team-up proves how elusive success really can be.

Stephen Gaghan loosely bases his film on a 1993 gold mining scandal involving the Canadian Bre-X Minerals company who claimed to have discovered a massive gold deposit in the Indonesian rainforest, the liquidated value of which was thought to be nearly immeasurable. What was found was later proven to be false gold of course, and the company subsequently found guilty of defrauding investors out of billions.

Gold changes names and dates to avoid legal trouble but it also largely avoids excavating any entertainment value out of the situation. While its star fervently takes to the task of portraying another wily, good-natured yet deeply flawed opportunist, this meandering mess of a story doesn’t do nearly enough to match the conviction of its lead character and the spirited performance of the actor.

McConaughey, channeling some of his Wolf of Wall Street charisma, plays Kenny Wells, an earnest gold prospector who finds himself way out of his depth when he steps out of the Borneo jungle and onto Wall Street, where he takes his father (Craig T. Nelson)’s company public after allegedly tapping into “the largest gold mine of the decade.” All throughout a balding, comically uglified McConaughey insists it is not about money, but rather the joy of discovering that very thing his father and his father’s father dedicated their lives to, the very resource to which Kenny and his geologist buddy Michael Acosta (Édgar Ramírez) dedicated a fun/malaria-infested summer at the equator.

The film is divided into two major slogs. The first slog is spent in the jungle as Kenny and Michael battle bad weather, brutal labor conditions (which lead to labor strikes), and increasing pressure from the outside to deliver. The second follows in the aftermath of the discovery and half-heartedly addresses the various political, social and personal implications and complications of accumulating wealth and notoriety. It also introduces a thoroughly forgettable subplot reminding us for the umpteenth time of how brutal and cold Wall Street can be.

I can’t help but feel Gaghan is operating in the wrong capacity as a director. Though the man has several directing credits on his résumé, there’s a reason most people only ever associate his name with Steven Soderbergh’s Oscar-winning film about heroin distribution. Traffic‘s screenplay was nothing short of brilliant. And he’s probably been told that ad nauseam so I’m a little surprised he chose not to take a similar approach to a story dealing ostensibly with the way gold fever — and McConaughey gets it pretty badly — can evolve into an addiction. How it can change, corrupt, maybe even damn a person. Gold didn’t need to be so serious, but it desperately lacks weight and importance.

Gaghan’s fourth directorial outing isn’t a poorly made product, per se, but it’s painfully obvious and worse, uninvolving. The McConaughey faithful head into theaters hoping to find gold but end up leaving with nothing more than a lump of bauxite in their hands. 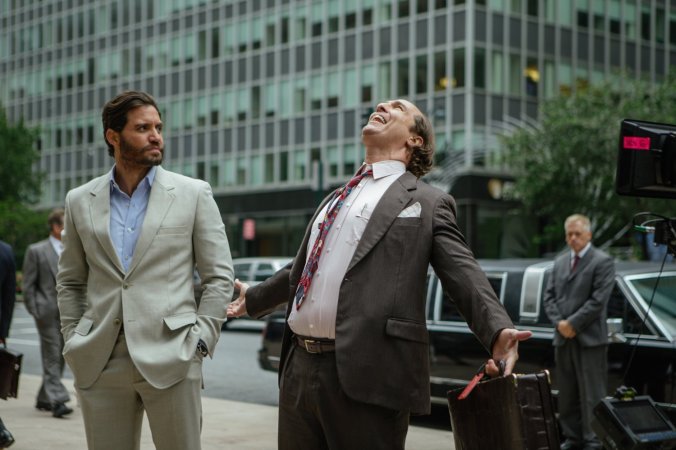 Recommendation: Disappointing David O’Russell knock-off strands another great Matthew McConaughey performance in a sea of mediocre drama. Very little about this predictable, tired trajectory has the impact the writers and the director were no doubt looking for. For what it’s worth, McConaughey and Ramírez make for a fairly entertaining duo.