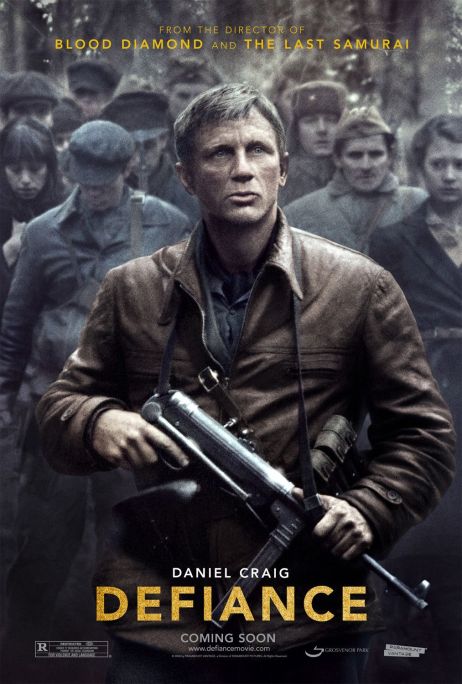 Defiance at the very least satisfies a certain curiosity I had about a film that featured Daniel Craig not in a suit and tie, and as of this posting — admittedly a time-sensitive and quite frankly rushed one — I feel more inclined to recommend it more on that basis rather than for its dramatic credentials. I mean, Defiance isn’t a bad film but it’s just not a great one and that’s kind of a shame.

Really, the most damning thing I can say about it is that in hindsight I would replace this film with something else for my January Blindspot — but, well, that wouldn’t make this a very blind Blindspot list, now, would it? Defiance is well-made but pretty forgettable, and while its lead man seems outwardly appropriate for the part of Tuvia Bielsky, a Polish Jew who helped thousands of refugees escape the death camps and ghettos of Nazi-occupied Europe, Craig once again makes it obvious he works best in roles that don’t require him to adopt an accent. Yeesh.

When Edward Zwick’s film premiered in 2009 it apparently caused quite the kerfuffle. Polish columnists in particular brutalized Defiance, accusing it of the sorts of things directors like Peter Berg and Michael Bay are regularly found guilty of today: xenophobic tonality; the glorification of violence; the oversimplification of extraordinarily complex circumstances. I didn’t find Defiance damaging or incompetent as others have, but its issues are obvious. Despite the fertile historical ground in which his material is rooted, Zwick bogs down an urgent tale with direction that largely feels uninspired and repetitive.

As his film notes during the end credits, the Bielski partisans — four brothers who amassed a secret community of some 1,200 homeless Jews in the depths of the sprawling Naliboki Forest, a near impenetrable mass of evergreen and marshland encompassing northwestern Belarus — never sought recognition for their heroic actions during some of the darkest days in human history. Zwick felt it was high time they received a little.

The narrative primarily focuses on the rift that develops between the two eldest brothers, Tuvia and Zus (Liev Schreiber) who, when brutal, violent oppression finally hits home differ in opinion over how they should respond. Tuvia, despite an early scene of bloody retaliation, insists on avoiding confrontation and becomes the de facto leader of the camp. Zus on the other hand feels strongly about seeking vengeance and joins a local Communist troupe, vowing to take the fight right to the Nazis.

The events depicted in Defiance occur over the course of a year. We watch as conditions within Tuvia’s faction deteriorate as winter sets in and as impending Nazi forces constantly force them to move around within the forest. They battle against starvation, exposure and the inevitable in-fighting as the need to stay hidden intensifies with each passing day. We cut back and forth between this sad scene and Zus’ predicament as he finds himself surrounded by “comrades” who don’t necessarily share the same sympathies toward the Jewish refugees. They do, however, eventually agree to provide much-needed medicine to Tuvia in exchange for help in knocking out a radio transmitter that is interfering with the Russian’s communications.

The film rides a fairly strong wave of emotion on the back of solid performances most notably from Craig, Schreiber and Jamie Bell, the latter finding a way to come into his own as he finds himself mounting a last-ditch defensive stand when German tanks appear in their neck of the woods. (Sorry.) Mia Wasikowska also leaves an impression as a love interest for Bell’s courageous Asael. Their blossoming romance quickly yields a wedding ceremony in one of the film’s defining moments, a tender act of love nestled at the heart of a narrative shrouded in darkness.

I’d feel better closing this piece on a note of positivity rather than with more complaints about how the film perpetually shirks its responsibility of authenticating events as detailed in the 1993 novel by Nechama Tec, Defiance: The Bielski Partisans, upon which Zwick’s movie is based. Of galvanizing survivors with a story that does history proper justice. Defiance isn’t that film. It’s something more closely associated with typical action fare, with the kinds of movies you expect Daniel Craig to star in. As Tuvia he is more James Bond than Moses.

No, allow me instead to wax poetic about the film’s visuals for an easy out. Even several days after, that wedding ceremony remains burned into my memory. The snow coming down, in all its cheesiness. The intimate gathering. The golden sunlight. Eduardo Serra’s camerawork simply stuns; he seizes the opportunity to capture the forest in all its eerie beauty, offering Defiance this compelling but disturbing dichotomy between the enchanting allure of nature and the ugliness of humanity. Who would have thought we would have ever heard the words ‘Mazel tov’ uttered in this place, in this time?

Curious about what’s next? Check out my Blindspot List here.

Recommendation: I can’t help but feel disappointed by Defiance but this is far from a bad movie. It just isn’t a very ambitious one. Daniel Craig, Liev Schreiber and Jamie Bell are the clear stand-outs (even if the former’s accent is horrendous at the best of times). But as a visual display, the film earns a fairly strong recommendation from yours truly.