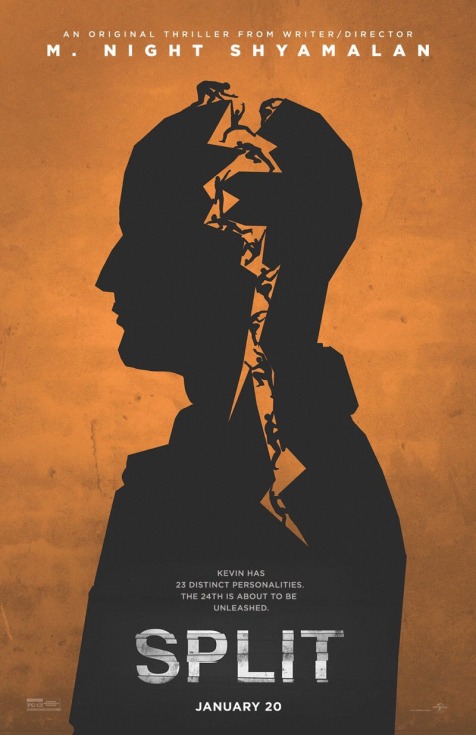 THIS REVIEW INCLUDES A MAJOR SPOILER

You just have to admire the child inside that M. Night Shyamalan has refused to abandon. His passion hasn’t always translated into quality entertainment but “going through the motions” isn’t a complaint you can lodge against the director. The fire keeps burning, even though the winds of critical and commercial failure keep trying to blow it out.

Amidst a climate of sudden optimism, it would seem Shyamalan has rediscovered his mojo, having delivered two consecutive products that have not become both the joke and the punchline (with last year’s The Visit garnering more positive reviews than his previous three efforts combined). Split, his most recent provocation which concerns three young women abducted by a man with multiple personalities, has people talking excitedly again.

The writer-director wastes precious little time in getting to work, introducing us to the three targets, led by Anya Taylor-Joy‘s moody Casey, before promptly throwing them down the rabbit hole. Her acquaintances, Claire (Haley Lu Richardson) and Marcia (Jessica Sula) — and they are verifiably more acquaintances than friends, based on a few buzzwords we hear in the opening scene, like “mercy invitation,” “obligation” and “weirdo” — are here to offer contrast, particularly in the way the girls respond to threat. Casey stands out as both outcast and survivor, the prototypical Shyamalan protagonist.

Their abductor is played by James McAvoy, whose dramatic chops are put to the test in a performance that requires him to evoke the quirks and mannerisms of at least eight distinct personalities. He plays a mentally ill loner named Kevin Wendell Crumb who suffers from a real disorder called Dissociative Identity Disorder, which has actually rendered 23 different identities in total. They range from obsessive-compulsive disciplinarians to matronly caretakers to naive pre-teens. Given the complexities of such a role, this could be the Scot’s finest hour.

Because it would be unreasonable to expect the actor to portray all of the personalities living inside his character — not to mention confusing for the audience — only a handful of them are paraded in front of the terrified girls who all the while can’t agree on an escape plan. The well-adjusted reason that physical confrontation is inevitable while Casey thinks it’s better to be patient and use Kevin’s condition to their advantage, believing their best chance for survival lies in their ability to manipulate Hedwig, the nine-year-old boy.

Shyamalan ranks among the best in the biz when it comes to generating suspense and making audiences dread what lies around the next corner. Split is more of the same in that regard, but it also has the added bonus of McAvoy’s stunning performance and Taylor-Joy’s nearly-as-impressive portrayal of a troubled teen with a dark secret, one that slowly gets teased out throughout the course of the film. But the thing about Shyamalan is that his childlike enthusiasm for sharing his gift for storytelling often undermines his seriousness of purpose. He is often too clumsy, too ambitious, too obsessed with artifice. Some of his decisions have proven disastrous. Split is not a disaster. In fact, 90% of it manifests as a really interesting psychological thriller that stays well below the usual threshold of silliness.

But that 10% is what is always going to keep Shyamalan a few steps short of greatness. And it is frustrating, because he is quite literally less than a few steps short of delivering his most satisfying psycho-thriller since Unbreakable, now 17 years old. It’s what he does to wrap things up that proves his undoing. Again. The ending is a complete betrayal of the reality in which his new film is based. I’m not concerned about the science that Split manipulates for its own agenda. A) It’s par for the course for fictional works to take dramatic liberties. That’s why it’s called fiction. And B) Kevin’s psychologist (played by Betty Buckley) isn’t the key to unlocking the film’s secrets.

No, that’s why we get Bruce Willis. You have got to be kidding me. I’m now waiting the ultimate plot twist wherein I wake up from all of this madness. 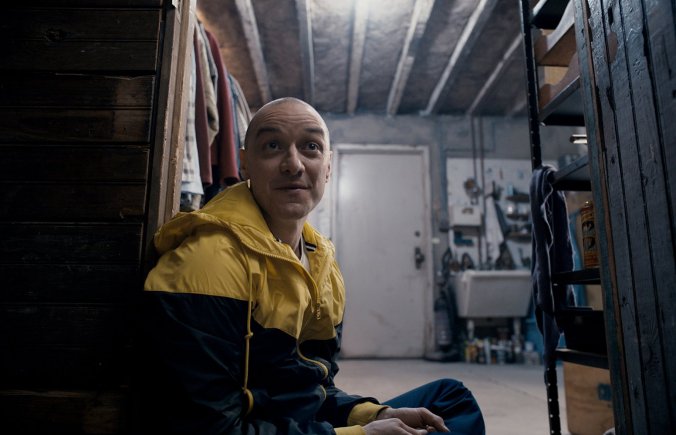 Recommendation: When compared to his most recent output, Split feels like a much more accomplished film. And for the most part it does impress, locking the audience inside a pressure cooker from which escape seems highly unlikely. Wonderfully atmospheric and well-performed, the guillotine that Shyamalan runs into at the end is just so regrettable. Two-thirds a return-to-form, in my book.

Quoted: “The broken are the more evolved.”