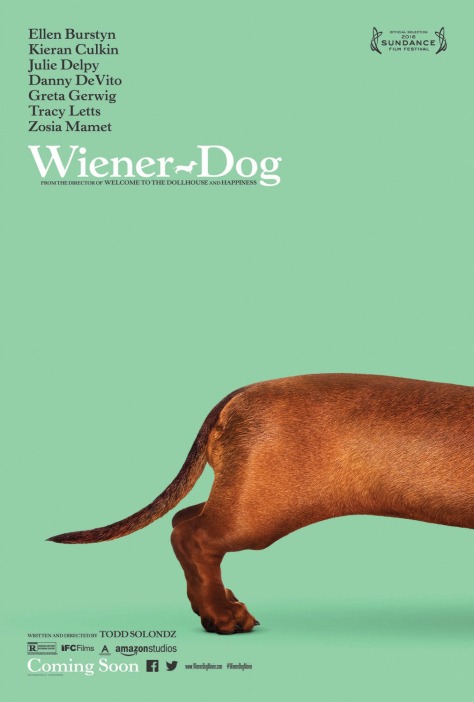 This review is my latest contribution to Mr. Rumsey’s Film Related Musings. Please feel free to leave a comment here or on the original article. Thanks as always for featuring me, James!

Wiener-Dog is a tough film to like. You certainly can’t, or maybe aren’t supposed to, love it. I’m actually pretty sure you’re just supposed to be shocked by it. It’s about a dog who gets shuffled from weirdo to weirdo who in some way or another finds their life affected by its presence.

Put that way, it kind of sounds like Air Bud or any other Disney-like movie about someone befriending a lovable canine.  Put that way, it sounds fun. This movie is neither of those things.

Wiener-Dog is an unrelentingly dark, bleak comedy peppered with unlikable characters and some sequences that are just begging for animal rights groups to petition and denounce Todd Solondz’ work à la Heaven’s Gate. Yes, a dog may be man’s best friend but in Wiener-Dog he is also man’s metaphorical punching bag. The film isn’t interested in subjecting the animal to physical cruelty but it surrounds the poor thing in a world of misery, disappointment, regret and general negativity.

That the dog often serves as our most relatable character says everything about Solondz’ disdain for the human race. He thrusts the dog (the audience) upon the kinds of dysfunctional individuals you only ever encounter in the movies, while insidiously breaking the spirit of dog lovers everywhere who were foolish enough to think this movie might be cute.

The innocence and naivety of animals subservient to man offers a point of view that over time becomes increasingly absurd. You’re meant to be experiencing the film through the eyes of the dog — at various points appellated ‘Wiener-Dog,’ ‘Doody’ and ‘Cancer’ — but it’s confusing because the movie isn’t so much about the day-in-the-life of man’s best friend. It’s more interested in using the dog as a vessel to transport us through the wreckage of these ‘ordinary’ lives.

The dog begins her journey with a wealthy family. Patriarch Danny (Tracy Letts) has brought home a puppy for son Remi who has been battling cancer. Dina (a loathsome Julie Delpy) isn’t a fan of the idea. She goes out of her way to tell her son that spaying a dog is the only way to prevent the dog from suffering various horrible fates. Everyone should have a mom just like her. After some time Remi’s lone source of happiness proves to be a pestilence and Danny decides it’s time to put it down.

Luckily for Wiener-Dog a sympathetic nurse snatches her out of the veterinary clinic. This saint is Dawn Wiener, an introvert to the extreme. Greta Gerwig plays the character who has been reprised from an earlier Solondz film, Welcome to the Dollhouse. She one day runs into an old acquaintance named Brandon (Kieran Culkin) and they embark on a road trip to Ohio to see Brandon’s family, to whom he must deliver some bad news. His brother and his wife — both with Down Syndrome — soon find themselves in possession of the dog when Dawn feels their home is a better place for her briefly beloved ‘Doody.’

Your commitment to oddball black comedies faces its toughest test when the dog inexplicably falls into the lap of depressed screenwriting prof Dave Schmerz (Danny DeVito). This bucket of pure misery epitomizes the film’s agonistic, misanthropic tonality. He is also Solondz’ most obvious middle-finger to his fellow man, in this case, prospective filmmakers who think they have the right stuff to launch a career. “It’s not that easy to be a creative genius. You have to be daring,” Solondz says with a bomb strapped to the titular dachshund in a scene you will have to rewind and watch again to believe.

Last and absolutely least the dog finds its way into the house of elderly Nana (Ellen Burstyn). The poor old thing can’t catch a break! Nana is visited by her awful granddaughter Zoe (Zosia Mamet) who expects her Nana to relieve her bank account of 10 grand so her beau Fantasy (Michael Shaw) can get his latest art exhibit up and running. You’re at a point in the picture where caring is so optional it’s not really even an option.

At the end of the day, Wiener-Dog is meant to inspire us to continue taking life as it comes to us, the good and the bad. If you aren’t as cynical as Solondz and you’re trying to make it to the end of his movie, you might find yourself having to be your own cheerleader. Keep telling yourself it isn’t always going to be this bad. You’ll eventually get to the end. 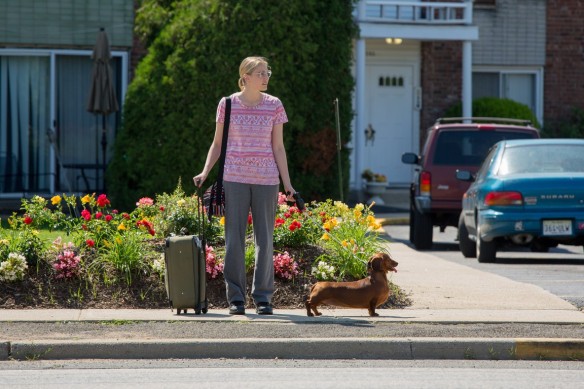 Recommendation: This is apparently Todd Solondz’ eighth feature film, and it’s my first time watching his work. It has a style and tone that gives me the impression he has his own cult following. If you count yourself among those people, you’ll probably lap up Wiener-Dog in all its weirdness.

Quoted: “A dog is not human. It’s an animal. Nature doesn’t care about them. It’s sad, but true. We’re dogs’ only friend.”