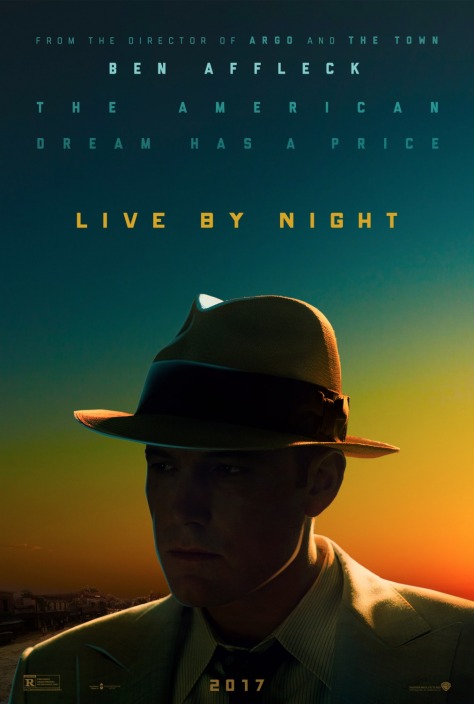 Even when Ben Affleck is off his game he still makes more thoughtful, involving pictures than many others who give it their all. Live By Night isn’t an example of Affleck giving it his all, but because the writer/director just does not know how to make something that’s not intriguing on some level his latest is a modest success.

I don’t really want to damn with faint praise something I quite enjoyed but there’s ample evidence throughout his second adaptation of a Dennis Lehane novel — this time a Prohibition-Era, Florida-set thriller about a rum runner and reluctant gangster — to suggest Affleck is running a little low on the creative juices. Live By Night is a fine way to spend two hours but there’s not even an outside chance Affleck finds himself back up on the stage in the Dolby Theatre this February. The tale simply is unable to find any separation whatsoever from like-minded mob movies.

Live By Night opens as Affleck’s Joe Coughlin has returned to his native Boston from the Great War, scarred by the loss of life around him and by what he did — mercifully he never shows us what that was. He leaves that to our imagination. In a voiceover Joe reflects on how he has come back a changed man, vowing to never kill again. Perhaps the real erring on the part of Affleck, commander in chief, is in his failing to safeguard against our intense skepticism.

In fact the moment he tells us he won’t kill again is the same moment we become convinced that he will. This is that type of film, where the inevitable is just so obvious when it finally happens it is sort of underwhelming. The prodigal son of police captain Thomas Coughlin (Brendan Gleeson) finds himself blackmailed into doing the dirty work for a violent Italian mafia boss when he’s caught in a love affair with the mistress of a rivaling, Irish mob leader by the name of Albert White (Robert Glenister). Joe’s girl is an Irish immigrant, like himself, played by the chameleonic Sienna Miller. Joe must eliminate White, or face being . . . well. Yep.

His fortunes change when he is sent to Ybor City, a rough area just northeast of downtown Tampa, where he finds success expanding his employer Mr. Pescatore (Remo Girone)’s rum empire. With the help of his partner Dion Bartolo (Chris Messina), Joe helps to secure much of the southeast as a viable marketplace for other business ventures like gambling and drugs. But Joe constantly maintains he will have no part in the murderous aspects of his trade. He insists on being considered less a gangster and more an outlaw. He’s one cape and cowl away from becoming a bootlegging vigilante.

Speaking of outfits, everyone who appears in the film comes dressed to the nines. The costuming and production design are so authentic you feel as though you are walking these streets and enduring these hard times along with the characters. A few of the get-ups verge on the ridiculous — see Affleck in a white suit that’s the equivalent of NFL jerseys back in the ’80s and ’90s  — and more often than not you can’t help but think the lavish design is meant to distract from the lack of original material.

The trappings of the hard-knocked life are all here: the threats, the beatings, the back-stabbings. The boozing and the repentant behavior that’s far too little too late. The latter is of course what we’re ultimately anticipating, and what presumably Lehane’s book builds toward as well — the price tag attached to all this moral turpitude. In Live By Night it comes in the form of Chris Cooper‘s Sheriff Irving Figgis and his goody-two-shoes daughter Loretta (Elle Fanning), both devout Christians whose own moral fiber becomes tested when daughter ships out to Hollywood only to return a drugged-out prostitute. At the behest of her father Loretta starts preaching the good word in Ybor City, vowing to put a halt on the development of the very casino Joe and his cronies are working to build.

Whatever is a non-violent (but very violent) bandit supposed to do when he’s shouldering the burden of one crime lord to get back at another? Turn to the Lord? Fall in love with another woman in a place where he is becoming a nuisance? (Spoiler alert: he does one of the two.) As with a great many gangster dramas, religion and family play a prominent role. There must be consequences to our actions. Affleck obligingly includes those elements as a measuring stick to help us judge how bad Joe really is, despite how gentle and caring he may seem when not on the clock.

Admittedly, subtlety is not among Affleck’s many (strong) suits this time around. Live By Night does not bow out gracefully. The way it ends is something close to terrible but it’s not quite enough to bring down the entire thing. It does, however, add an exclamation point on the argument that this is nothing more than a generic crime thriller. If you’re looking for shock value or inventive deaths, twists and turns you never expected — you won’t find them here. It’s not even really that violent. The action is kept to a minimum, which is actually refreshing in the sense that it allows Affleck to explore moods and mindsets rather than showcase how scary bad men are with guns.

Live By Night won’t be remembered for much, but it’s by no means a sign that Affleck has become truly lost (cue Liam Neeson from Batman Begins). It demonstrates a clear appreciation for the kinds of people and experiences that have shaped the nation into what it is today. Affleck taps into a period in American history in which drinking was outlawed but racism and violence were given the thumbs up. There’s something beautifully contradictory with the way he juxtaposes these realities. I just wish he did so with a little more inventiveness.

Recommendation: Far from original or top-notch Ben Affleck in terms of his directorial prowess (though his performance is appropriately ice-cold, and in the same fascinating way he was in The Accountant as an anti-social enigma), Live By Night should suit fans of the writer/director/actor as well as those who don’t set their standards too high when it comes to the genre.

Quoted: “This is heaven. Right here. We’re in it now.”

8 thoughts on “Live By Night”