Spectators historically aren’t accustomed to seeing a professional boxer not finish what they started — at least, not voluntarily. When Roberto Durán, the man with two of the most devastating fists in all of boxing, waved his gloves at his opponent in the 8th round of a 15-round bout signifying that he didn’t want to fight anymore, no one believed what they were seeing. On November 25, 1980, the man with “hands of stone” turned his back on more than just a fighter he did not respect.

The bout in the Louisiana Superdome became infamously known as the ‘No Más fight.’ Despite the fact he lost, Durán’s actions were so bizarre the story that emerged was all about him losing, rather than his opponent winning. That’s a reality Sugar Ray Leonard has had difficulty reconciling all his life, and as we are introduced to him in the opening frames there’s a bitterness barely hidden behind his otherwise calm demeanor, a bitterness about the way history has been written. Somewhat counterintuitively, No Más is (mostly) told from his point of view.

Eric Drath, associated with a number of sports documentaries and short films, wants to know, perhaps as desperately as Leonard himself, what it was that caused Durán to throw in the towel that night in New Orleans. Divorced from the event by several decades, the film offers a unique perspective as it captures the once-bitter rivals in much more casual settings — except for the part where it throws them back together in the ring for a casual chat in a climactic show-down (of words), set under bright lights but sans the bloodthirsty audience. It’s a little cheesy but I found the trick nonetheless effective. And despite being 60 years old Durán’s eyes can still pierce a hole straight through you.

Durán and Leonard famously hated one another. Perhaps the most interesting thing about the three fights they committed to was the fact that there actually were three fights — neither one managed to end the other outside of the ring, despite temptation. The Panamanian in particular was hostile, openly mocking Leonard by calling him “a clown.” (And remember that one time he saved a middle finger salute for Leonard’s then-wife?) Durán had several reasons to consider the American his enemy. For one, his childhood was spent enduring the political turmoil that made his hometown of El Chorrillo an often unpredictable environment, as the United States and Panama fought for control over the Canal. Durán’s father was an American-born man who bailed on the family early. Durán also perceived Leonard’s popularity as grossly overblown and that he wasn’t as good a fighter as he proclaimed himself to be. (For those keeping score, Durán only won one of these three fights.)

For a film dealing with such marquee names, No Más plays out in quite the understated manner. The story develops quietly and methodically, bobbing and weaving in between present-day footage of Leonard preparing for his visit to Panama and archived footage of the events themselves. If anything the final reveal is underwhelming in its brevity. I would have liked to have heard more about what these two talked about in the ring. Drath pulls interviews from family, friends, former trainers and fighters — notably Mike Tyson — to help contextualize events. Supermodel and photographer Christie Brinkley also weighs in. These soundbites are far from the most insightful clips the 30 for 30 series has featured, and Tyson in particular isn’t a very good talker, but his recollections of how he felt when he witnessed ‘no más’ delivers a surprising gut-punch.

Perhaps what we gain from the experience isn’t so much revelatory as it is a reminder of the fragile emotional state boxers are so often in while in the ring. Durán almost certainly quit out of pride, but you’ll never hear him say those words, nor give any indication this is how he really feels inside. If he says anything about it today he’ll still tell you it was stomach cramps, not Leonard’s attacks that caused him to quit. He also actively denies ever uttering those infamous words. Some may dismiss this as merely the hubris of the defeated. But “no más” was at such odds with the boxer’s comportment, the way he carried himself both publicly and privately, that it makes this documentary quite the fascinating mystery. We, like Leonard, may not get the closure we’re looking for, but at the same time we learn quite a lot along the way. 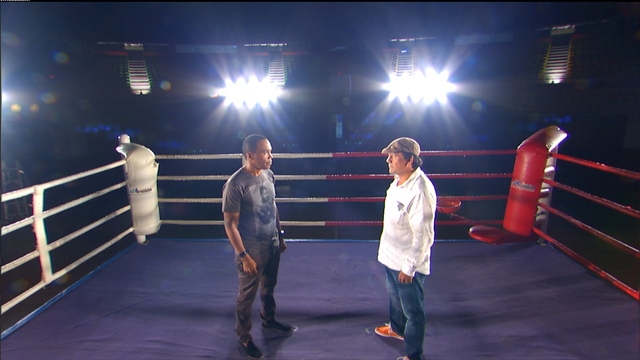 Recommendation: Fascinating, if occasionally frustrating recounting of what may or may not have happened during Durán-Leonard II in New Orleans gives fans of boxing some food for thought. The interviews beyond the boxers themselves aren’t the greatest things ever but there’s certainly enough here to recommend for followers of the sport or those itching for some more in-depth coverage after seeing Hands of Stone, the semi-autobiographical account that was released in theaters earlier this year.