Damien Chazelle’s critically-acclaimed modern musical is being hailed as one of the most original movies in years. That’s not surprising given the cinematic environment into which it has been born. It’s hard not to appreciate the oasis in a sprawling desert. While Disney animation in particular continues to inject original song and dance into each new incarnation, barring one or two high-profile exceptions the traditional musical has been all but banished from contemporary cineplexes. La La Land represents a change of tone from the writer-director’s previous exploration of creative obsession, and the scope has been broadened with the way he interrogates aspects of life beyond the singular pursuit of perfection. What he presents in 2016 is a lively, upbeat jazz musical that revisits several familiar themes.

Viewed through the lens of career ambition (okay, yes — obsession), the city of broken dreams offers an uncanny backdrop. Approximately 60 L.A. locales were used, ranging from dilapidated trolley stations to infamous stretches of freeway near the bustling metropolis. Coupled with the bright, neon lights and iconic landmarks, La La Land is a romantic outing in more ways than one. It is visually spectacular, an ambition unto itself. And while many of the musical interludes won’t leave any lasting impression, two of them — the catchy opening tune ‘Another Day of Sun’ and Emma Stone‘s stand-out solo ‘Audition (The Fools Who Dream)’ — are absolutely fantastic. These are certifiable “Oscar moments.”

La La Land tosses several significant and believable obstacles in the paths of our protagonists, once more asking viewers what we would sacrifice to ensure our dreams become realized. Our story, as it were, is constructed out of the interactions between two star-crossed lovers — Mia (Emma Stone), an aspiring actress, and Sebastian (Ryan Gosling) — as they evolve from strangers with road rage to significant others. In their third romantic pairing (Crazy Stupid Love and Gangster Squad being the others), the actors feel entirely natural together. Under the guidance of Chazelle the two really are wonderful. They’re first spotted in the very traffic jam that opens the film in a surprisingly thrilling fashion. They’re not exactly amiable towards each other at first, with Sebastian blaring his horn at Mia having grown tired of the woman in front of him not paying attention to her surroundings.

Quite serendipitously the two will meet again, first at a small restaurant where Sebastian has just been fired for disobeying his manager (J.K. Simmons in a cameo) who told him explicitly not to play any jazz, only the Christmas jingles. This encounter is also far from pleasant. Later the two meet again at a couple of L.A. parties, where they could be meeting anyone. I would have rolled my eyes more but Chazelle writes so well forgiving these nagging coincidences is not only easy, it’s mandatory. Cheesiness is part of the fabric of the musical. Despite feigning disinterest in one another via the film’s obvious centerpiece — a beautifully choreographed dance number near Griffith Observatory synchronized with a setting sun that bathes the valley in royal purple — the two share an irresistible charm that reminded me of Jim Carrey and Kate Winslet’s affectionate ribbing in Eternal Sunshine.

As the two eventually entwine their lives together they attempt to motivate each other to make their dreams become realities. A passionate jazz pianist, Sebastian sees himself opening his own club one day, despite how he barely gets by on the gigs he plays right now. The aforementioned fall-out at the restaurant finds the musician relegated to playing synth for an 80s cover band at birthday parties. His girlfriend scratches her head when she sees him stooping to a new low by going on tour with a mainstream band headed by a high school acquaintance named Keith (John Legend). “Do you like this kind of music?” Mia asks during a heated exchange over a candlelit dinner. Sebastian stabs back with a reminder that her acting career has yet to take off. Refreshingly, this relationship isn’t perfect. Matters of practicality vs. idealism begin creating friction. Sebastian maintains he is doing whatever he can to make ends meet. He no longer can afford to be so idealistic.

In La La Land conviction is everything. Enthusiasm and vigor prevent the production from descending into schmaltz. It’s a quality that applies to virtually every aspect of the filmmaking process, from Chazelle’s emphatic direction to the complicated dance routines that give characters as much soul as any awards-baiting monologue ever could. From the meticulous location scouting to the cinematography that makes Los Angeles bleed colors we haven’t seen since Nicolas Winding Refn lit the place on fire with 2011’s Drive. The songs won’t make you want to sing in the rain like Gene Kelly, nor are they quite as supercalifragilisticexpialidocious as anything Julie Andrews did . . . but hey, they’re still catchy. And given the inexperience of the cast — Gosling learned to play piano and tap dance for his part, while Stone reportedly had some balance issues — the fact that we catch ourselves moving our feet in rhythm speaks volumes about the harmony of the post-production process. La La Land comes together very well, despite several familiar elements.

The film’s music is almost always fantastical, in some instances even ethereal as a lone spotlight falls on the singer of the moment while the rest of the world fades to black. But the fantasy doesn’t subtract from the authenticity of the emotions on  display.  Impressively the story stays rooted in reality, and the experience is not exactly pain-free. Chazelle is a passionate advocate for jazz music, clearly. I mean of all things, he landed on a jazz musical, in a day and age where country singers and pop stars are being manufactured on game shows. In an era of jaded 20-year-olds who think jazz is just music stuck in the past. And while thematically it feels like the writer-director is somewhat treading water post-Whiplash, ultimately he inspires simply because of the gamble he just took to realize his own ambitions. 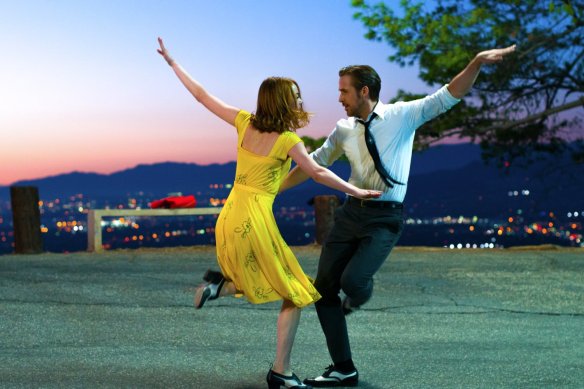 Recommendation: La La Land, a film with enough verve and color to supply at least five other major productions, lingers in the mind because of the fascinating combination of modern actors performing arguably outmoded roles in an era where the musical is no longer popular. It’s a film for Ryan Gosling and Emma Stone fans and jazz lovers alike. It’s a film for romantics. But if you’re heading in expecting Damien Chazelle to up his game from Whiplash, you might find yourself disappointed. Because that film was a stroke of genius.

Quoted: “You could just write your own rules. You know, write something that’s as interesting as you are.”