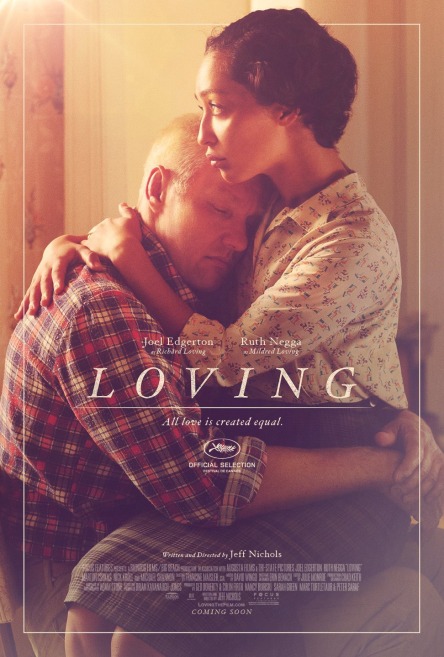 One of the most common red marks on my college papers was the criticism ‘Show, don’t tell.’ These notations littered my 300-level Opinion Writing assignments. I recall one particular article in which we had to discuss how a recent environmental disaster in Kingston, Tennessee had been handled by the company and how the media covered it. I did nothing but go around in circles, relying far too heavily on abstraction and flowery language that ultimately offered nothing concrete.

Jeff Nichols doesn’t seem to have my problem. I left Loving with little doubt as to whether Richard and Mildred Loving could be anything other than together. He has made a series of conscious decisions to show rather than tell audiences what the love was like between an interracial couple living in 1950s Virginia. The portrait is so simplistic and earnest it becomes cathartic. Its quiet but undeniable power left me in awe. While the story of the Loving family is set against a backdrop of racial tension and bigotry, this isn’t a political film. It’s purely an ode to a married couple who deeply cared for one another and who would do anything to ensure they could pursue a life of happiness together.

Historical drama details the events that led up to the Supreme Court case of Loving v. Virginia. The majority of the film centers squarely on the couple as they endure the harsh prejudices of society but the climax, subtle as it may be, shows how their trials — both literal and figurative — set a legal precedent in a nation on the cusp of the Civil Rights Movement. The ruling struck down nationwide laws that prevented whites and people of color from being legally married. In Loving, the couple make the trek from their quiet country home in Caroline County, Virginia to Washington D.C. to get married.  They return with a marriage license which Richard promptly hangs on their bedroom wall.

One night they are rudely awakened by a pair of officers who have somehow received word about their nuptials. The couple are jailed, but because Richard is white he is bailed out first. Meanwhile his wife must stay the weekend in a holding cell. In court the couple plead guilty to breaking the state’s anti-miscgenation law and now face a one-year sentence. However, the judge offers to suspend the sentence under the condition that they do not return to Virginia for at least 25 years. The Lovings move in with a friend in D.C., but then later return to the countryside for the birthing of their first child. They are arrested again shortly thereafter but are spared further punishment as their lawyer successfully lobbies for leniency, claiming he had misled his clients.

As time passes and after the couple bear two more children, their circumstances begin weighing heavily on Mildred. She eventually seeks help from a Bernie Cohen (Nick Kroll), a lawyer representing the American Civil Liberties Union. Bernie’s investment in the couple’s plight is not merely a mark of maturity in the actor; the performance confesses the sort of attitude and open-mindedness that restores hope for humanity. He seeks the advice of Constitutional law expert Phil Hirschkop (Jon Bass) to help bring the case to the attention of the Supreme Court.

In Nichols’ latest, beauty runs deep. In Loving there is an element of physical attractiveness but that dynamic is subdued in favor of the way souls attract. In fact, skin color is only ever addressed by the outsider — those not directly involved in the affair. Throughout we see how Richard not only maintains a friendly rapport with his extended family, who happen to be black, but how he is truly accepted by them. But even the level-headed aren’t totally devoid of judgment. The couple’s actions have clearly made many of their neighbors uncomfortable and it is this reality that Richard often finds himself battling — not so much because he is white but because of his defiance. Mildred’s sister in particular becomes embittered by Richard’s decisions.

What’s most impressive is how Nichols’ screenplay never resorts to reductive or manipulative techniques. There are no great sacrifices — at least, no one freezes to death in the north Atlantic so their other half could survive the night on a floating door — nor are there any explosive arguments that threaten to rip apart the fabric of love itself. Instead Loving uses a pair of heartfelt performances to demonstrate what love actually is: trusting, patient, unflinching in the face of adversity. Love is an arm gently resting upon your partner’s shoulder or wrapped around their waist; it’s about sharing a moment of silence in the kitchen and being distracted from the discomfiting temporariness of such peace.

Joel Edgerton, who plays Richard in a potentially career-best performance, and the Ethiopian-born Ruth Negga, who is Mildred, are so good together it almost hurts the heart seeing the two in much more casual stances in photos for the accompanying press tour. The last time I had this much trouble reconciling reality with fantasy was when it was revealed that John Krasinski and Jenna Fischer were, in fact, not an item. Why, oh why, can’t these two people really be together? Such is the net effect of this profoundly moving film. 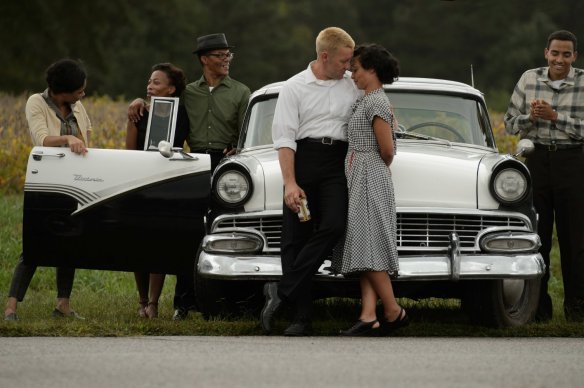 Recommendation: Such a touching, precious film about real relationships has this reviewer raving! Performances are virtually the whole deal, and yet another strong directorial effort from one of my favorite up-and-coming directors (hell, he’s already here) in Jeff Nichols puts Loving in a position to make at least one of my end-of-year lists. The film paces itself leisurely and at times I found myself getting fidgety but other than that, this is a pretty close to perfect little film. Romantics at heart certainly need to buy a ticket, but Loving will also appeal to those seeking an uplifting, fact-based story that doesn’t resort to melodrama.

Quoted: “Tell the judge I love my wife.”