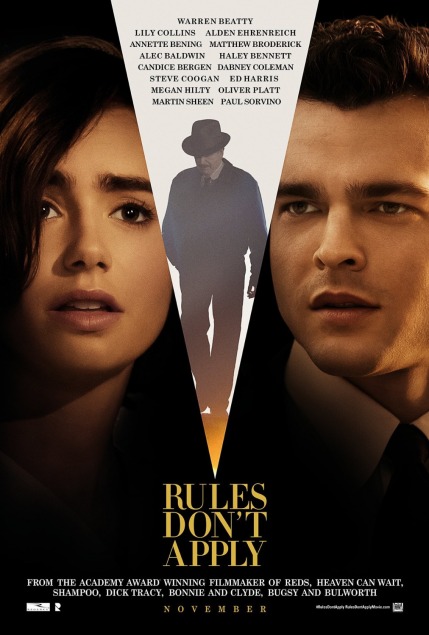 Toothaches. Internet trolls. Airport pat-downs. These are but a few things that grate on the nerves less than Warren Beaty’s new film.

In Rules Don’t Apply, an ambitious driver tries to make it with a devout Baptist and aspiring actress who in turn tries to make it with Howard Hughes. That’s THE Howard Hughes — aviator, film producer, and eccentric. Guess how that turns out? Really, really freaking annoying — that’s how. “O Lord in Heaven.” (Just to be clear, the religious overtones perpetuated throughout aren’t what make the film a chore to sit through, though they don’t really help.)

Beaty sort of applies the rules established by the Coen brothers in this off-beat, often bizarre and off-putting ‘romantic comedy.’ It has their comedic tastes written all over it, figuratively speaking. If it actually had been written by them, Rules Don’t Apply would surely have been better off. It’s farcical, at times to the point of slapstick and in many ways evokes the Coens’ most recent effort Hail, Caesar! Ironically, I considered that one of their lesser outputs despite its strengths, namely a nostalgia for the Golden Era of Hollywood. Beaty, serving as writer, director, co-producer and star, similarly pines for the days of the Big Studio System. In fact there is more romance in his lust for a paradise long since lost than in any of the character interactions.

In 1958 Marla Mabry (Lily Collins), a Bible-thumping beauty queen hailing from Virginia, is being escorted by Frank Forbes (Alden Ehrenreich), along with her uptight mother Lucy (Annette Bening), who has come along to help ensure her daughter doesn’t lose herself in the madness that is Hollywood. O Lord in Heaven. Frank, a chauffeur for Hughes’ many actresses, becomes Marla’s personal driver. He’s given explicit instructions to never get into a romantic affair with any contract actor working for Hughes, so of course that means he is about to get into a romantic affair with a contract actor working for Hughes. It is Matthew Broderick’s sole responsibility to keep reminding the youngster of company policy.

Broderick is but one of many tumbleweeds that wheel haphazardly, aimlessly, through the desolate wasteland of entertainment that this ultimately becomes: Ed Harris, Steve Coogan, Oliver Platt, Martin Sheen, Alec Baldwin, Paul Schneider and the aforementioned Annette Bening all feature but collectively must account for fewer screen minutes than the number of names I just rattled off. Hard to believe there were no other up-and-coming talents that could have fulfilled such bit parts. Hell of an egotistical move to feature so many accomplished thespians and give them a single line of dialogue at a dinner table, for example. Blink and you’ll miss Steve Coogan as Colonel Doesn’t Even Matter.

We are in a time when Hughes is not well. His increasingly erratic behavior is sending up all kinds of flags indicating he is neither fit to be running a company nor flying aircraft. Infamously the entrepreneur suffered from Obsessive Compulsive Disorder and pain as related to a plane crash that nearly killed him. He became reclusive and extremely difficult to work with. If there’s anything Rules does well, it’s in laying out the numerous eccentricities that made him a true enigma in his latter years. Much of the narrative is devoted to keeping Hughes in the shadows, the short-term effect of which manifests in Marla’s mother bailing for greener pastures while her daughter stays to see if something will come of it. The long term effect? Leave that to Ehrenreich’s loyal terrier.

If indicators of a good performance include how often a character gives you conniption fits, consider Beaty’s an Oscar-worthy submission. As an interminable two-hour running time plods ever onward his baffling behavior intensifies, notably in the third act — incidentally where all sense of narrative cohesion goes out the window. In some weird way Beaty’s performance is the glue that holds the flimsy bits together. Ehrenreich doesn’t fare quite as well. Frank has the personality of a brick, and his devotion to such a lunatic boggles the mind. Perhaps you, too, will find yourself shouting at the screen in an empty theater. Maybe even an occupied one. No one really comes out of this smelling like roses, but unfortunately Collins is saddled with one of the most thoroughly unconvincing character arcs I’ve seen in some time. I could go into spoilers but I’m so not interested. Suffice it to say, I think Beaty has misinterpreted what the expression ‘devout Baptist’ means.

The longer I sit on this, the more I’m convinced Beaty’s latest owes a great deal to Hail, Caesar! Substantively the two films are quite different — whereas Caesar delineated a day-in-the-life of a Hollywood studio fixer, Rules tackles a love triangle involving two people who really don’t belong together and a Hollywood luminary who uses the actress as a loophole to avoid being committed to an asylum, and thus losing his company. But if we’re talking the tangibles, the sorts of tricks the Coens used to obfuscate a fairly poor screenplay that lacked depth and any real meaning — ensemble casts, picturesque cinematography/iconic imagery — the two seem kindred spirits.

Beaty’s intentions are good. They’re also clear. Rules is another love letter to an era long passed. The man has crafted a picture with love and care, evidenced in the pastel sunsets he captures and the warm color palette that makes Beverly Hills glow in an ethereal light. And there’s something compelling about the way he presents Hughes as a very tragic character. But he’s no fun to be around, and his increasing prominence in the story makes the film very hard to like. 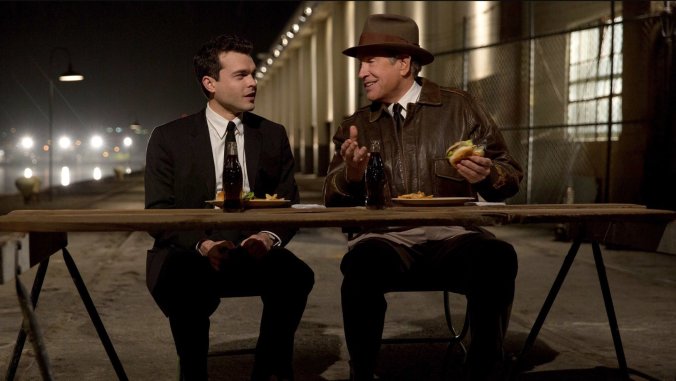 Recommendation: Perhaps this is one of those cases where a film’s substance becomes so overwhelmingly unpleasant and ultimately forgettable that it obscures the product’s legitimate strengths. But the film also suffers from a dearth of issues from a filmmaking standpoint. Poor editing, terrible character development and a rather convoluted plot all work against it. Also, watch out for that 42% audience rating on Rotten Tomatoes. Just saying . . .

Quoted: “You’re an exception. The rules don’t apply to you.”

This hobby blog is dedicated to movie nerdom, nostalgia, and the occasional escape. In the late 90s, I worked at Blockbuster Video where they let me take home two free movies a day. I caught up on the classics with my middle brother, started writing movie reviews for Denver newspapers and magazines (when they were tangible pieces of paper), and I continue to revisit the old and discover the new on the screen. Comments and dialogue are highly encouraged. It’s been a joy meeting people from around the world who share the same passion for film. Let's uncover the next groundbreaker together!