Last time we were here, Paul was drawing comics — dark and sort of depressing ones, but successful ones nonetheless. He was portraying Harvey Pekar, author of the underground comic series ‘American Splendor,’ autobiographical accounts of an ordinary and, yes, depressing life. (Hey, he was from Cleveland.) But now the plot thickens as we turn the page to a new role that’s both in itself complex and embroiled in an altogether more complicated and slightly more romantic story. Let’s play cops and illusionists in this month’s Paul G, shall we? 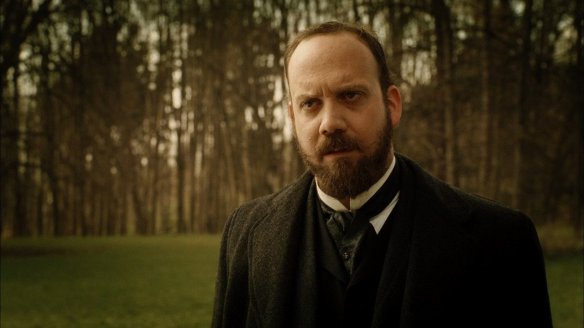 Plot Synopsis: In turn-of-the-century Vienna, a magician uses his abilities to secure the love of a woman far above his social standing.

Character Profile: Chief Inspector Uhl, loyal servant to the brutal Crown Prince Leopold of Austria and an intelligent man to boot, is due for a promotion. When Sophie, the Duchess von Teschen, is apparently murdered at the hands of the very man she was to marry the inspector is called upon to get to the bottom of it, a task that soon proves difficult when he must contend with the mystic powers of the infamous Eisenheim, with whom the Duchess shared a history. A first encounter with the performer proves tense though ultimately innocuous, with the inspector pressing to find out the secrets behind Eisenheim’s tricks. As the story plays out, Uhl proves to be quite the complex character, seemingly unable to avoid becoming seduced by the magician’s transcendent abilities, while trying to remain as ever simultaneously committed to Prince Leopold and to his duties as an officer of the law.

Why he’s the man: Chief Inspector Uhl is yet another great example of Giamatti’s ability to walk a fine line between being a guy we’d like to hate or see fail for some of his actions or the way he seems to sympathize with terrible people, and being someone who manages to convince us he’s ultimately out for the greater good. Uhl is on more than one occasion left between a rock and a hard place, having to demonstrate his loyalty to the Crown by tracking down and arresting Eisenheim for his spirit-summoning performances — the most egregious offense is when he seems to reincarnate Sophie who says she was indeed murdered but there has been a fall guy involved — all while abiding by a strict moral code of conduct. As an officer of the law he can leave no stone unturned, and Giamatti is fantastic in convincing us of the dilemma he finds himself in. An intriguing role made all the more so by the ever-dependable Paul G.