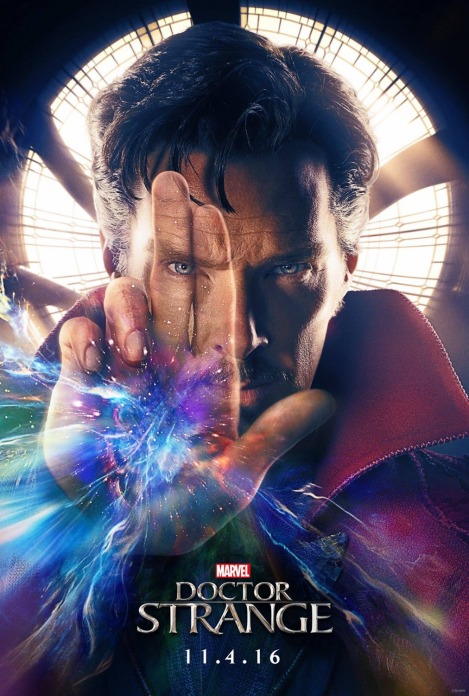 Benedict Cumberbatch’s introduction to the Marvel Cinematic Universe is far from inauspicious, but Doctor Strange falls short of being the prodigy its parents want so badly for it to be, though not for a lack of trying with shaky hands.

Strangely, what proves to be yet another underwhelming, formulaic and contrived origin story ultimately becomes an acceptable reality because inventive special effects rule the day. This is such a sumptiously visual feast the story all but becomes an afterthought. It’s The Deadpool Effect: some movies are just going to get a pass because somehow, whether through mixed tapes, sorcery or outrageous Ryan Reynoldsry, the enjoyability factor supersedes substance. Cumberbatch slips into the superhero role like he’s been here before, turning in an excellent performance that will be, if anything, the big takeaway from this particular chapter in the MCU. He’ll be the torch that will light this story through forthcoming installments.

It’s either that or the Inception-on-steroids visual gimmickry that takes our lowly three-dimensional existence and flips it, twists it, inverts it and then manipulates it back into a shape approximate to what was there before. In Doctor Strange you’ll experience a multitude of physical and even psychological paradoxes as you break the planes of multidimensional existence and pass through portals to other worlds (or just other parts of our world). Perhaps no other movie this year or in the last several have made such a conscientious effort to make the viewer feel like they’re hallucinating most of what they’re witnessing. Go ahead, rub your eyes. It’s really happening.

The story, the fall from grace of Doctor Stephen Vincent Strange, isn’t particularly exciting but I suppose it’s one worth investigating here. An egomaniacal surgeon who regularly performs miracles on the operating table, his world is flipped upside down one night when he is involved in a bad car accident and becomes a patient in the very hospital he has stood tall in for years. A complicated emergency surgery follows, something that Strange doesn’t take altogether very well. In the ensuing fall out, he shuns emotional support provided by former lover and fellow surgeon Christine Palmer (an under-used Rachel McAdams) after attempts to receive experimental surgery fail. Too arrogant to accept there are other ways in which he can help people, Strange sets off for Kathmandu to seek the help of a mystic who lives there.

A hop, skip and jump later we’re in the slums of Nepal, sifting through an altogether unfamiliar environment. The backdrop suggests humble new beginnings, but it’ll take some time for Strange himself to become humbled. His arrogance follows him everywhere, even inside the walls of the Kamar-Taj, a secret compound that could have been lifted right out of the Matrix training program. Rather than a dojo for Neo to learn how to control his mind, it’s one in which Strange will learn to drop everything he knows to be true and to embrace the realm of sorcery and magic. Tilda Swinton, beautifully androgynous in the role as The Ancient One, is his reckoning.

The Sorcerer Supreme shows the doctor that indeed other dimensions exist — realms that Earth is shielded from thanks to the tireless efforts of sorcerers stationed at the three sanctums found in London, New York and Hong Kong. But she’s not prepared to train Strange because his cocksureness reminds her of a former Master who had gone rogue. That Master is none other than Kaecilius (Mads Mikkelsen), who became seduced with the idea of eternal life offered by Dormammu (voiced by Cumberbatch), a supreme being concealed in the bowels of the Dark Dimension. Kaecilius manifests as the film’s chief antagonist, with whom Strange finds himself interacting if not entirely too prematurely.

And that’s largely the film’s problem: it is in too much of a hurry to get to the goods. Much of this transformation, while rewarding in the sense that this is much like returning to the mindfuck Neo experienced when he took the red pill, is designed to provide the easiest, most agreeable payoffs. Like much of Marvel’s cinematic property. Here, though, the psychological, philosophical and mystical elements lend themselves to a much more high-brow kind of cerebral experience. Once more the cutting edge of creativity is blunted by writing-by-committee: witty one-liners attempt to provide levity but end up more distracting and pandering, the training montage is almost blink-and-you’ll-miss-it, and the villain is maddeningly mediocre, though the talented Danish actor makes him worth watching more so than he probably deserves.

Notable stand-out performances help elevate the pedestrian narrative considerably. Chiwetel Ejiofor as Karl Mordo is an idealist with an intense and complicated relationship with The Ancient One who is the first to accept Doctor Strange into the ranks. Then there’s the film’s second Benedict, Benedict Wong who plays . . . Wong. I’m actually not kidding. He is a source of stoicism and loyalty, acting as the full-bodied keeper of the Kamar-Taj and chief librarian, after the former librarian is, um, relieved of his duties. And Mikkelsen resonates in the role of a man hell-bent on immortality. He convincingly argues he is not out for the destruction of mankind but rather the continuation of it, albeit via some pretty questionable methods.

We’re 14 movies deep into the MCU and yet Doctor Strange never seems to work as hard as it should, overly reliant on the strength of the visual component to carry the burden. (Okay, and Cumberbatch, lest I forget to state the obvious. He’s great.) This particular film, directed by Scott Derrickson (Sinister; The Day the Earth Stood Still) is an axiom in the sense that modern cinema is trending the more visual route rather than the intellectual. Like Deadpool, Doctor Strange never succumbs to mediocrity, but it’s just barely above that threshold. The familiarity of everything we go through makes the title Doctor Not-So-Strange-Actually-He’s-Quite-Normal feel more appropriate.

Recommendation: Don’t get me wrong, Doctor Strange is a lot of fun, but when it comes to introducing another of its obscure characters, Marvel seems far too satisfied with outfitting them with overly familiar clothes.