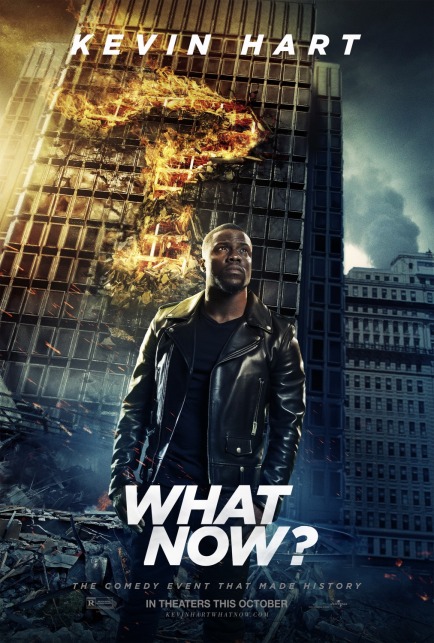 Kevin Hart: What Now? isn’t quite as groundbreaking as the marketing may have you believe, but if you’re a fan of his stand-up it remains a must-see event. While the venue itself suggests the next phase in the evolution of this hyperkinetic ball of energy — imagine, just for a second, this guy on a world stage (LaughAid?) — What Now? is actually the third such concert film, following up Let Me Explain (2013) and Laugh at My Pain (2011), and it is the fifth instance in which a camera crew has accompanied him on stage, fixated upon his every spastic move.

In Leslie Small’s film Kevin Hart finds himself stepping out onto the biggest stage of the biggest tour of his career at Lincoln Financial Field in Philadelphia, where he’s set to perform in front of a crowd 53,000 strong. Ordinarily this cavernous space is reserved for the rituals of diehard Eagles fans — not of the band but rather of the city’s NFL franchise. But on one night in August, this sacred ground would belong to a comedian. The What Now? film that audiences get to see in theaters represents the culmination of a historic tour, not just for this performer but for any comedian who has ever aspired to promoting their brand in the arena setting.

Hart was born and bred in the city of brotherly love. He struggled in the early part of his career to earn the laughs, frequently being booed off stage and enduring endless ridicule. At one show he had a piece of chicken hurled at him. For awhile he scrounged around in Philly under the alias Lil Kev, attempting to duplicate the brilliance of those who had come before him, like Chris Tucker. His humble beginnings in some ways make his homecoming magical. It’s as if he had never gone Hollywood in the first place. Though he’s never projected the image of someone who’d rather sacrifice their soul for the allure of Tinseltown than stay true to themselves, he’s certainly found success there. He has starred in a number of action-comedy vehicles and his performances in front of thousands of live audiences from the sun-kissed beaches of California to the more distant provinces of Europe and even Cape Town, South Africa has earned him a global reputation.

In the hour-and-some-change that we get to spend with Hart on stage — the show is prefaced by an amusing sketch that implicates Hart’s swaggering shortie as James Bond negotiating the poker table in Montenegro — we learn a few things about the guy, but not as much as one might expect out of someone who never seems to hide who he is. Not that his set is intentionally distant or impersonal — he throws members of his family under the bus on a number of occasions, which is pretty funny in and of itself — but there’s a certain genericness about the material he runs with here. Nevertheless, Hart is seemingly able to pull wildly entertaining anecdotes out of his pocket at random and the bulk of his act is spent regaling us over ultimately harmless familial tensions, his insecurities over being vertically challenged, and his experiences as a black male in modern America.

Have you ever gone to a movie — perhaps something just like What Now? — where you start off chuckling at a few things but then there’s that person behind you who finds everything so amusing that some of their energy starts rubbing off on you? Laughter is contagious and the people with whom I was sharing this small theater were having a riot. I found myself committed to what can only reasonably be described as a cackling contest with this unidentified patron, laughing far harder at stuff I should not be. After the movie I wanted to scold myself for allowing external forces to influence me. I didn’t want to go back and write a review of an experience that was largely amplified by what I was experiencing in person. Manufactured, even.

I have to say, other than the running raccoon-as-gangster gag and his trademark manic energy that constantly threatens to break into full-blown Tasmanian devil mode at any moment, I don’t remember much of this set. But I will always remember the first time I was in a movie where it sounded like the guy behind me seriously soiled his jockeys.

Recommendation: Fans of Kevin Hart’s stand-up need apply. For obvious reasons. I will always maintain that there is a major distinction between his live performance and his film roles, and take them or leave them as you so please, but I find his on-screen performances entertaining as well. So I’m an apologist. And don’t ask me whether or not you should see this if you are anything close to sitting on the fence. You already know the answer.

6 thoughts on “Kevin Hart: What Now?”