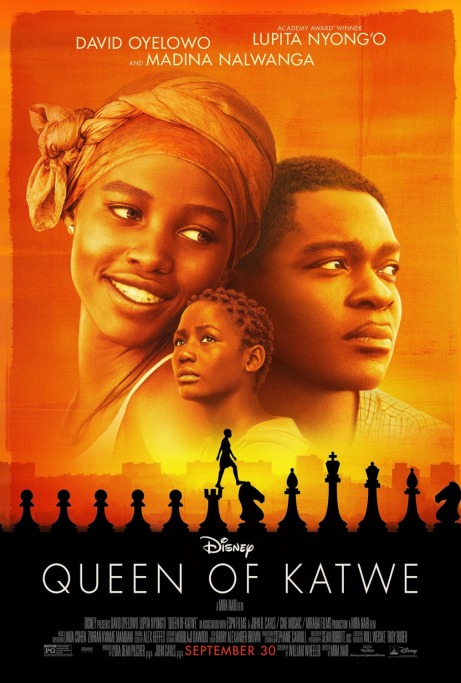 Despite the illusion of diversity and the notion that films are now being tailor-made for niched audiences, director Mira Nair’s latest feels like a rarity, one that’s not only good for the soul, but good for Disney. Here is a work of substance that is going to satisfy, dare I say move, those seeking a more refreshing point of view. Better yet, themes of poverty and desperation are never overwrought, the drama working comfortably within the PG rating to effect one of the year’s feel-great experiences.

The film was shot entirely on location in Uganda and in Johannesburg, South Africa, and it features a Ugandan director in Nair, who was born in India but presently lives in the country and it is her vision and her choice cast that earns the film a refreshingly authentic African vibe. Though it does visit some dark places, the narrative chooses to forego any sort of political commentary in favor of celebrating what makes African culture so distinct; rich in personality and heart, warm in spirit and color — much of which is reflected in the stunning wardrobe courtesy of Mobolaji Dawodu.

With Disney of course you’re never short of a few doses of cloying sentimentality but in Queen of Katwe the feel-goodness feels really good and it feels earned. It’s also not that simple, as you’ll likely feel on more than one occasion, really, really bad.  It doesn’t hurt that the picture features two of the year’s finest performances and a star-making turn from Ugandan newcomer Madina Nalwanga. Incidentally, Nalwanga has experienced considerable changes of fortune in her own life having afforded an education subsidized by the dance company she performs with. When the film screened at the Toronto International Film Festival this year, it was the second time she had ever seen a film in a theater, and this time she was the star.

The story tells of Phiona Mutesi, a 10-year-old chess prodigy from the slum village of Katwe — a region within Kampala, Uganda’s capital — who manages to transform her life by competing in major chess tournaments. The movie traces her rise to prominence while delineating the tension between the gifted Phiona and her mother, who doesn’t want to see her daughter’s dreams crushed. Phiona comes from an especially impoverished family of five — she has two younger brothers and an older sister. Her widowed mother, Nakku Harriet (Lupita Nyong’o), is the glue that holds everything together, working tirelessly to keep the family under a roof and to keep her children fed. She often goes hungry and works long hours selling vegetables on the streets. Life’s desperate and Phiona’s sister Night (Taryn “Kay” Kyaze) has already had enough, having become infatuated with the city life after meeting a man of some wealth.

One day she comes across a group of kids playing chess in a tent. They’re being mentored by a man named Robert Katende (David Oyelowo) who also happens to be working for the town ministry. After quickly learning the basics, Phiona shows promise as a player, often beating her fellow competitors, which stirs up quite the fuss as no girl should be allowed to beat a boy. It’s not long before Katende realizes her quick wit and intellect separates her and he finds himself jumping through hoops to encourage her mother to allow Phiona to pursue this. There are cash prizes awarded at these tournaments, he says. But Nakku pushes back, concerned that exposure to an altogether unattainable life will ruin Phiona.

Queen of Katwe falls upon familiar underdog story constructs but Nair employs them such that they’re necessary plot propellants. The most familiar of the obstacles manifest themselves in the competition scenes. When the youngsters travel to their first competition nerves are high, the opponents are well-dressed and contemptuous. Perceptions of inferiority and illegitimacy can be traced back to the moment Katende advocates for Phiona’s inclusion in competitive chess to members of the Katwe school council. Bureaucrats tell him bluntly that those from the slum should not intermix with people of another class. Additionally, the constant degradation on the home front as the family find themselves temporarily evicted isn’t anything we haven’t experienced before but there’s a rawness to these developments that just can’t be ignored.

The resolution is far from unpredictable, even given the oppressive circumstances into which this bright young girl has been born. Phiona is obviously an anomaly. We know she’s going all the way to the top, and we know she’s going to ultimately succeed. It’s the journey getting there, and getting to experience her family’s struggles and their perseverance that ultimately rewards. And when the film is so handsomely mounted and beautifully acted, particularly by Nyong’o and Oyelowo who offer powerful resilience and unwavering support respectively, that makes the culmination of all things positive and predictable that much more acceptable. Queen of Katwe is a Disney film that reminds us of the power of perseverance and the importance of intellect, one that creatively parallels the complexities of chess with the decisions one has to make in life, whether the end game is elevating one’s social standing or finding a way just to make ends meet. This is a born winner. 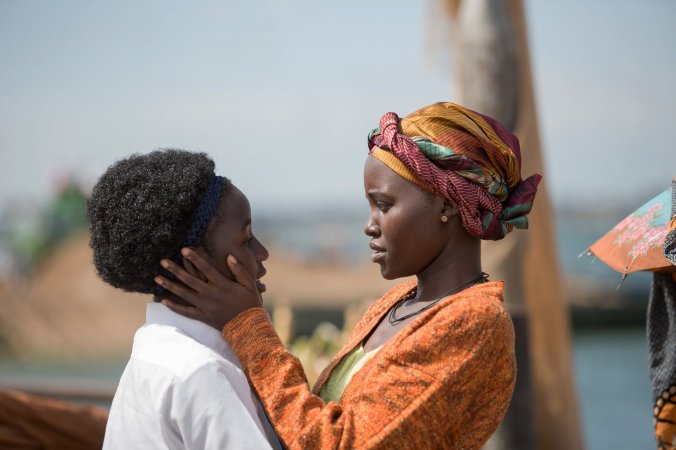 Recommendation: Powerful performances allow Queen of Katwe to transcend cliché and they also help the film speak to a larger human experience of rising above circumstance and overcoming serious odds. It’s nice that the film focuses on a part of the world that doesn’t get the big screen treatment very often. And as to the sport that lies at the heart of the film — I concede I don’t find chess altogether exciting but the way the director and the screenplay works it in to the story actually makes it pretty compelling. I personally have no idea what’s going on on a chess board but I had no problem believing that this brilliant girl did. That’s the mark of a good actor.

16 thoughts on “Queen of Katwe”

This hobby blog is dedicated to movie nerdom, nostalgia, and the occasional escape. In the late 90s, I worked at Blockbuster Video where they let me take home two free movies a day. I caught up on the classics with my middle brother, started writing movie reviews for Denver newspapers and magazines (when they were tangible pieces of paper), and I continue to revisit the old and discover the new on the screen. Comments and dialogue are highly encouraged. It’s been a joy meeting people from around the world who share the same passion for film. Let's uncover the next groundbreaker together!