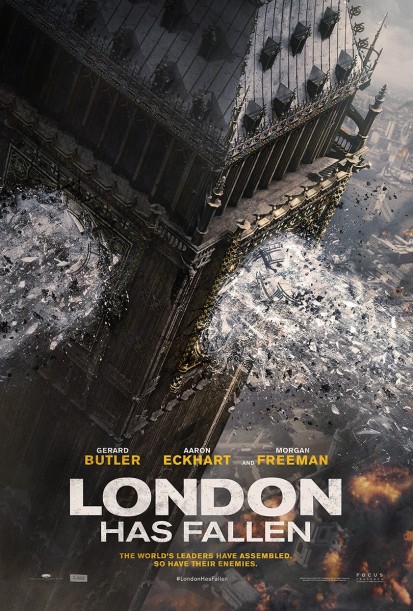 London Has Fallen was a theatrical release I happened to miss out on and I am glad for having saved that money. Buying a bag of crack cocaine (which is what I did) would have been a better use of that money (and it was).

Gerard Butler reprises his role as Mike Banning, and he’s still President Asher (Aaron Eckhart)’s body guard. The two have now become homies, and you know this because you see Banning jogging backwards alongside the Prez on one of their many morning runs in DC. That’s a skill that’ll come in handy! (Actually that’s not even really sarcasm; the two dudes end up running a LOT in this movie, although you’d have to believe they don’t engage in too much running in reverse — that wouldn’t be practical, unlike driving in reverse.) For director Babak Najafi, apparently this is character development.

Despite the privilege of sharing dude-bro-isms with his Commander-in-Chief, Banning is considering resigning so he can spend time with his wife, with whom he is expecting his first child. But the nursery will have to wait because the British Prime Minister has passed and President Asher and his security detail must attend the funeral in London. Many world leaders show up to pay their respects, but before they can many of them are riddled with bullets when Najafi decides to dispense with the bullshit.

Then the rest of the movie happens, which is, ironically, even more bullshit than the bullshit that came before. Need I address it? Are you really curious for more? Sigh. Alright, well here’s this:

Just when it looks like the good guys are about to get away from what appears to be a developing war zone in the heart of London — ground zero being Westminster Abbey — their chopper is shot down by some assholes on some rooftops because hey, they shouldn’t be able to get away THAT easily. And so ensues 90 minutes of Call of Duty, the map manifesting as a smoldering metropolis castrated of its most famous landmarks. Brainless action sequences follow as do some of the worst lines of dialogue exchanged between actors playing supposedly important characters, men and women of prestige. But that doesn’t stop members in the Situation Room chatting about being partial to the Kardashians (I’m not kidding) as they prepare for what they think is going to be another normal day.

The main objective of the terrorists is to get revenge on the guy who wiped out some notorious Middle Eastern crime lord’s family and they plan to record the assassination live so it can be on YouTube. (I’m also not kidding.) The main objective of the Americans is to kill every last man with dark hair, dark skin and thick beards. The script, penned by four different idiots, is so xenophobic it makes my skin crawl. Unlike in the previous outing, there is zero tension between Banning and the President so ultimately there is no reward in seeing Butler macho his way through another terrible movie. All we really get that’s new is watching Eckhart sling a gun around awkwardly for 30 minutes as circumstances become increasingly dire and as the baddies make communication with friends across the globe extremely difficult.

The story is atrocious but the film’s attitude is so much more cavalier. London Has Fallen doesn’t give a shit about England. It’s more about the greatness that is America than it is about the character and prestige of one of her longest standing allies. What’s more embarrassing is that the basic premise doesn’t even hold up logically: the terrorists claim they are retaliating after Asher ordered a drone strike on a Pakistani fortress two years prior, and yet they make an attempt to eliminate every single leader who happens to be present in London. I guess just for shits and giggles? Meanwhile, Morgan Freeman gets paid to breathe.

This is quite simply one of the most pathetic action movies I have ever seen and if you are looking for logic in a movie like London Has Fallen, I’m afraid you may have made some deeper errors. Indeed, standards have fallen and they have fallen pretty far mate. 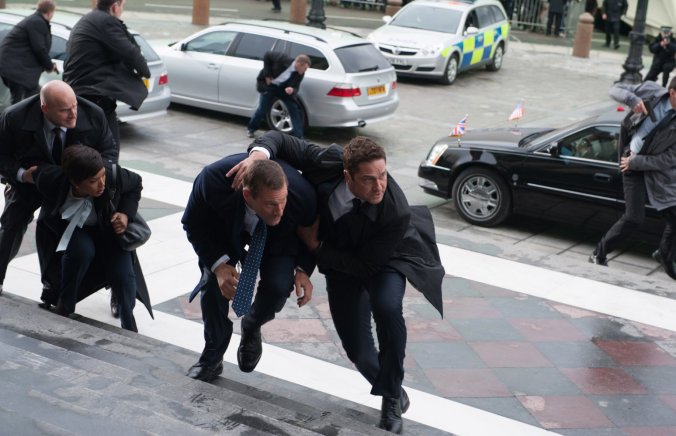 Recommendation: Terrible. And pointless. What’s next, Sydney Has Fallen?* Aside from a few fleeting moments of mindless, distracting action, and plus the fact I do like Gerard Butler and Aaron Eckhart (they’re easily the best part of this movie even though they both look like they were struggling to take this seriously), there’s absolutely nothing to recommend about London Has Fallen, a most unnecessary sequel made by a very xenophobic director that I’m not sure too many people asked for.

Quoted: “I was wondering when you were gonna come out of the closet.”

8 thoughts on “London Has Fallen”