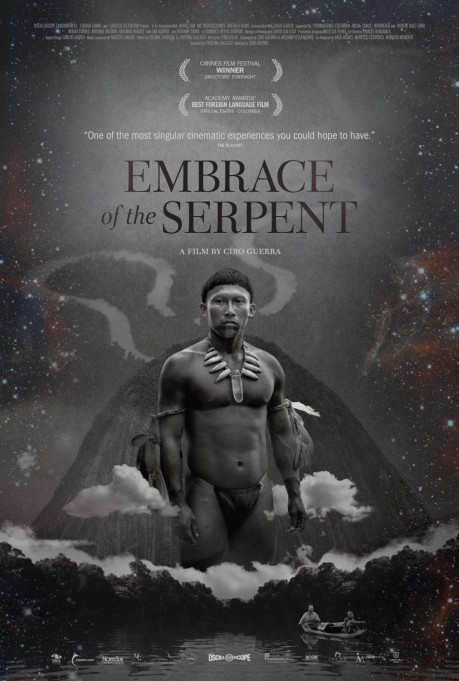 This  review is my latest contribution to Mr. Rumsey’s Film Related Musings. I would like to give a shout-out to James for allowing me to talk about this unique cinematic experience.

Embrace of the Serpent (El Abrazo de La Serpiente) was Colombia’s entry into the Best Foreign Language Film category at the 88th Academy Awards, proving that for director Ciro Guerra the third time is the charm. His first unsuccessful submission happened to be his very first feature, the 2004 drama Wandering Shadows, and the second in 2009 for The Wind Journeys. Guerra of course lost to Son of Saul director László Nemes, but he shouldn’t have. In fact this is the kind of experience that just begs the question, why can’t foreign language films also be eligible for Best Picture?

Guerra’s epic excursion through the beautiful but harsh Amazon rain forest is not just last year’s best picture (and by a mile), it’s one of the most raw, most vital experiences you are ever going to have. It’s a religious experience (quite literally in some senses) — an unforgettable journey whose spiritual and cultural pulses are so tangible the film ceases to be a film and instead becomes a snapshot of a reality many of us have conveniently forgotten. Though the account is fictional, portions of the narrative have been inspired by the experiences of early 20th Century western explorers and their encounters with the indigenous peoples of Colombia. The drama is so authentic it induces pangs of despair that only documentaries on harrowing subjects like genocide and other forms of persecution are able to. Of course this film, at least tonally, isn’t quite as heavy as something like Son of Saul, but it touches upon a subject that is just as heartbreaking: the devastation of native populations in the wake of western expansion.

Embrace of the Serpent, shot in a seductive grayscale, follows two stories set roughly 30 years apart. The first finds German ethnologist Theodor Koch-Grunberg (Jan Bijvoet) searching for a cure for a serious illness he’s come down with having spent many years in the Amazon. The scientist’s actual journal entries form the basis for Bijvoet’s outstanding performance and they also play a prominent role in the narrative itself. Said diaries are filled with illustrations and scribblings he fully intends to bring back and use as a communicative tool between vastly different societies. In his quest to avoid dying a miserable, jungly death Theo seeks the help of Karamakate, an Amazonian shaman and the last of his own tribe. As a younger, more hostile man he is portrayed by Nilbio Torres in a performance you simply must see.

That a white man has encroached upon his territory unsettles Karamakate deeply and he’s unwilling to help until Theo makes it clear he isn’t here to profit like most westerners have by extracting the rubber from rubber trees, a practice that has led to the enslavement, torture and eventual diminishing of “savages” across numerous western outposts. Theo has been traveling by canoe with a more westernized local, a twenty-something named Manduca (Yauenkü Migue) who is constantly chastised by Karamakate for betraying his own people by adopting western customs like wearing a tee shirt and pants. Everyone is on edge and it is in this state of utter distrust we beat a path through the dense jungle, in search of the (fictional) yakruna plant, whose hallucinatory powers are considered Theo’s best chance for survival.

Guerra entwines this saga with Karamakate’s experiences in 1940 with American explorer Richard Evans Schultes (Brionne Davis). He’s hoping to continue Theo’s work by similarly documenting his travels. He too holds an interest in the yakruna plant, only Karamakate claims he can’t remember where it can be found. Thirty-one years older and that much further removed from the customs and rituals of his people, he is portrayed as an impossibly lonely and broken man by Antonio Bolívar. His lowest moments confirm that sometimes the most powerful evocations of human emotion come in the form of the quiet sob.

There’s a brilliant symmetry to the way Guerra has chosen to structure the piece. The earlier timeline firmly establishes the tenuous trust-building process while the latter proves specifically how that trust can be so easily violated (there’s something we don’t quite buy into with the American explorer; Theo somehow seemed more genuine). The split narrative also affords the internal conflict churning inside Karamakata room to breathe and become an almost unbearable weight. He doesn’t give the outside world direct access to all he holds dear just the once; he goes against his better judgment twice. Embrace of the Serpent, then, becomes more about his resilience and his perspectives. He’s not exactly a man without flaws and his occasional misgivings about the white man can sting deeply (not all of us are monsters). Even so, the way the film concludes leaves little doubt as to where our sympathies should ultimately lie.

Guerra’s vision is distinctly his own. Embrace of the Serpent is an entirely immersive experience that taps into primal human behavior, one that is as cerebral as it is physical. One of the main concerns of the older Karamakata is not being able to recall his ancestral history because of past actions he himself has taken, while Schultes laments not being able to dream because of his work. But it’s not all about suffering. There’s a lot of beauty to be found as well, particularly in the visual aesthetic. Crisp black-and-white photography lends a sense of timelessness and an ethereal quality to the jungle. It’s an artistic flourish that contributes immeasurably to the sense of insulation we feel as we make our way towards the striking round domes of the Cerros de Mavecure, where the yakruna can be found.

Of course this would not be a proper review without discussing the serpent itself. Guerra restrains himself impressively in terms of how he allows the serpent’s mythological symbolism to influence his narrative. Derived from Latin (‘serpens’), the most obvious metaphorical application is the duality of good versus evil. In truth, you can apply it as metaphorically or as literally as you like: Guerra uses the birthing of a snake in an early scene to remind us that snakes are indeed a very real and dangerous entity, while Karamakata later describes the birth of creation as the descending of a serpent from the skies.

Spiritual connectedness also features prominently. At one point Karamakata is shown a picture of himself and, rather than recognizing the image as a moment frozen in time, he believes it to be his ‘chullachaqui,’ a hollow spirit form. Throughout we’re reminded once and again of a complex belief system thought to maintain order in this otherwise hostile and unpredictable environment. We’re never asked to embrace it but we are challenged to respect it. Karamakata believes Westerners are limited by their own ignorance (scientists can only think in terms of facts and observable phenomenon; those who seek riches can only think in terms of money and material possessions, etc.), whereas the native inhabitants of the jungle are much more attuned to the grander hierarchy of existence. This in and of itself is enough to open the flood gates for lively debate.

Embrace of the Serpent isn’t just a memorable watch, it is a significant cinematic achievement. Guerra’s assured direction and the mesmerizing performances from his small cast combine to form a visceral, challenging experience that simultaneously defends a dying way of life and homages some great survival/adventure films. Flavors of The Jungle Book, Lord of the Rings and Werner Herzog’s Fitzcarraldo — even Mel Gibson’s Apocalypto — are all sampled, but a part of me feels that this particular film reaches some psychic level that none of the aforementioned quite managed. It reaches far higher than the vast majority of Best Picture nominees have in recent years. 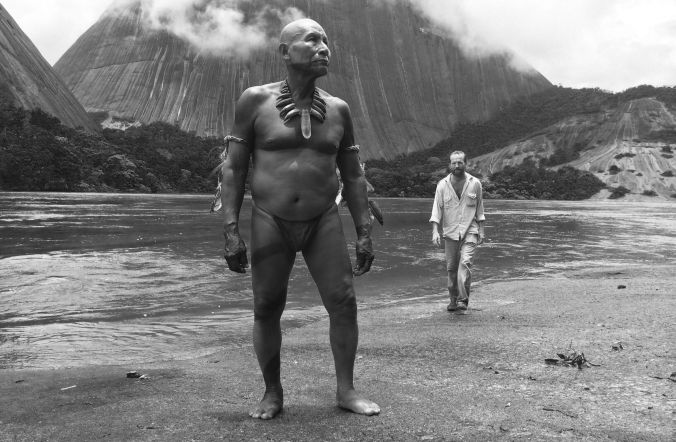 Recommendation: Utterly compelling stuff and hands-down one of the most extraordinary things this reviewer has ever watched. (Interestingly, in a year that has given us a lot of disappointments . . . A LOT . . . I have also been able to find two films that might make my all-time greats list, the other being the delightfully bizarre indie Swiss Army Man.) Embrace of the Serpent is a film whose dialogue is delivered primarily in native tongues but eight other languages factor in as well. Don’t let the subtitles scare you out of this. You simply just have to get your hands on this.

23 thoughts on “Embrace of the Serpent”